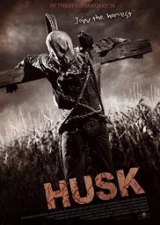 In this film we have a group of friends who are on their way to a house to party for the weekend. The driver is played by C.J. Thomason and he is talking to his brother who is played by Ben Easter. During this a bunch of crows seem to go crazy and dive bomb at the windshield, killing them and causing a car accident.

Everyone is knocked out, but awake soon after to find that Easter is gone. The rest of the group is filled with a nerd played by Devon Graye, a track athlete who is played by Wes Chatham and his girlfriend is played by Tammin Sursok. Graye and Chatham decide to go into the corn to look for Easter.

While their gone, Sursok sees a boy in the corn as well as a scarecrow that has teeth inside its head and smells bad, she decides to go after her boyfriend and all Thomason can do is follow.

The other group finds a scarecrow on a perch. Graye climbs up and notices it smells bad, but gets a good look of the house. He notices there is a light on. On their way to finding it, they stumble on a gate as well as a mailbox in the corn. Not too far is a car that met a similar fate as their vehicle.

Inside the house they find Easter sewing in the room with the light. His eyes have a white milky look and he doesn’t notice them. They also notice he has driven nails through the fingers on one of his hands. When Easter is finished, he leaves and they hear a scream from the corn.

Graye soon after begins to see images of what has happened here and that is how the film’s back-story is explained. Can they end the vicious cycle? Will that get away before they become part of it?

This film has a lot of elements that scare me, scarecrows, cornfields and the isolation and disorientation they cause. The problem is they tried something here and I don’t think it worked out as well as they thought. I like the concept of the ghost trapped in the corn field and using the scarecrows for a host, hence the name husk, but the reasons the characters do things in this film don’t make a lot of sense and they set-up a way to stop it, but they go nowhere with it.

The acting isn’t all that great. It isn’t horrible, but nothing that will blow you away though. Mostly a lot of running, screaming, out of breath talking and making bad decisions in the face of a scary situation, so come into watching this with that in mind.

I would recommend this film if you’re scared of things I stated this film had above. Don’t expect much, but it is a decent horror movie with a few jumpy parts, some blood and bad decisions that lead to people dying. Not horrible, but not that good either.