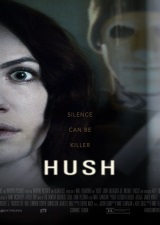 This film begins showing us a woman as she is cooking dinner. She is played by Kate Siegel. She is trying to follow a recipe on her computer, but according to the faces she is making, it is not going as planned. She gets a message from her neighbor asking what she is doing and if she can come over.

The neighbor is played by Samantha Sloyan. They talk outside and this is where we learn that Siegel is a writer. Sloyan has read her book and wants to talk about it. We also learn that Siegel is deaf. Sloyan is learning sign language to communicate better with her. Seigel can read lips as well. We see from the back of the book that she lost her hearing and ability to talk from bacterial meningitis.

Sloyan noticed that Siegel’s fire alarm is going off. It has a strobe light and is extremely loud. We learn that it has to be so it creates vibrations that would wake Siegel is there is a fire when she is sleeping.

Siegel goes to work trying to finish her second novel. It is going too well as she has seven possible endings to it. When Sloyan was over, we learn that Siegel has a voice she hears in her head and that she believes it is that of her mother’s. This is how she writes her book as the voice will go through all possible scenarios for the characters to go through. Siegel distracts herself by doing the dishes for the food she didn’t eat and burned. She did receive a text message earlier from someone named Craig. She deleted it without replying.

Siegel sits back down to write and is still struggling. She twice tries to FaceTime with Craig, but cancels it both times. When it rings back, she panics, but it is her sister, played by Emma Graves. They talk and the man, played by John Gallagher Jr., enters the house. He is watching her. Graves thinks she sees him, but Siegel thinks it is the cat. She then uses the food dish to try to get her back inside. That is when she is sent a picture to her computer. Gallagher has taken her phone and using it to snap pictures of her.

Gallagher is wearing a mask when he appears to her. She locks him and out and then goes to call the police, but he turns the power off. She must now find a way to get past this man, call the authorities or kill him. Sloyan’s boyfriend, who is played by Michael Trucco, does show up a little bit later, but he doesn’t know what is going on. Gallagher had taken his mask off to show Siegel what he looked like and he talks to Trucco. He attacks him when Siegel accidently distracts him.

Will they survive or will Gallagher kill them both? Can Gallagher be stopped before it is too late?

I saw somewhere that someone compared this film to The Strangers, which I will agree with. I also was recommended to watch this film by a few people and I’m glad I did. I think it is a great concept. I love the idea of Siegel being deaf and has isolated herself out in the middle of nowhere. She has made herself the perfect victim trying to run away from things in her life. It is such a disadvantage to be deaf where you don’t realize you are making noise and that the killer can hear her. It makes it that much tougher as well when you can’t tell someone what is going on. As I stated, the setting makes this film even creepier. I also really like that she introduced her writing style and how she comes up with the stories she writes, as it helps with her planning what to do at the climax. I wanted to commend this film on its realism, especially when it comes to blood loss. I liked that the killer uses a crossbow, being that is it a silent weapon and adds tension at the end of the film when Siegel gets her hands on it. I did find it interesting as well that the film will show from Siegel’s perspective by having the sound change to like when you get hit in the ear and can’t hear anything. It helps you understand and feel what she is experiencing.

This film does have a couple of clinches that I’m not a huge fan. The first one was her trying to get Trucco attention when he is talking with Gallagher. I get that she is scared and does it without thinking, but she should realize that is going to alert Gallagher. The other issue that really annoyed me was that any time she uses a weapon, she lets it go and Gallagher ends up with it. I also question Gallagher, as he could have killed her and just been done with it from the beginning. He gets himself locked out for a good portion of the film. He does seem like a psychopath that is enjoying this game, but I think personally if I was going to kill someone, I would get it over with so I’m not caught. Not that I am planning to do this myself.

With that said though, I really liked this film. I thought the acting was good. There isn’t a large cast so that does make it easier. The concept of the film is really good and helps to build the tension. The other part of that is the setting, being isolated out in the woods is something we see a lot, but very effective. The film did have some clinches and things that happened that I didn’t love, but it doesn’t ruin the film either. I would definitely recommend giving this film a viewing, another solid one from Blumhouse.