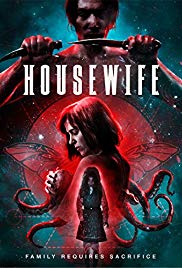 Writer: Can Evrenol and Cem Özüduru

This was a film that I got turned on to after I watched the writer/director Can Evrenol’s previous film Baskin. A fellow reviewer was interested for me to see this one and what my thoughts on it. Outside of what I know about Evrenol’s previous film and a short in an anthology, I came into this one pretty blind. The synopsis is on a snowy eve; little Holly’s sister and father are killed by her frantic mother. Years later, Holly (Clémentine Poidatz) is married, lonely and her life is soon about to take a turn for the ultra weird when she visits “Umbrella of Love and Mind”.

As the synopsis stated we start with two little girls playing in a room. Holly (Zuri Sen) and her sister Hazel (Elif Gülalp) seemed to have been told to stay in their room. When Hazel starts her period, Holly bangs on the door to get her mother to come. She is Defne Halman and takes Hazel away. Holly follows to find her sister being drowned in the toilet and their father comes home. He is attacked by the mother with a knife, killing him while Holly watches from the open front door.

It then shifts to Holly as an adult while she is having sex with her husband, Timucin (Ali Aksöz). Through the scenes from this point, we see that can’t sleep and that she doesn’t have a lot to do in life. She is scared of using the toilet and is just moving through life. Together they go out with another couple and the other male talks about an article he wrote about a cult called Umbrella of Love and Mind. They go by ULM. Holly and Timucin reveal they know of the cult as a former roommate of Holly’s disappeared with them. They are invited to go to the seminar they are giving.

Valery (Alicia Kapudag) is Holly’s friend and she comes to them the day of the seminar. She convinces them to come to it. Timucin doesn’t seem thrilled. It is at the seminar that Bruce (David Sakurai), the leader of this cult, is drawn to Holly and opens up her mind. She thinks is helping her get over her past trauma, but it really starts a nightmare that will change their lives forever.

I feel very similar to how I felt after seeing Baskin. There is a lot I really like about this film, but there is a lot that I really don’t understand what is going on. I don’t think that is necessarily a bad thing though. To start off with the positives, I love the idea of this cult. It really seems like something that could be out there that takes advantage of people that are damaged from trauma. I don’t want to sound like some of it isn’t good and can’t help people, but I think for the most part, they prey on people who are naïve or need help. This one is much worse than that as it seems like Bruce really can do things to your mind.

Going from there, I really like the atmosphere of this film as well. There is a lot of nightmare logic, which is something that Evrenol is great at conveying. While watching this, I wasn’t sure what was real, what was a dream or what is just in the mind of Holly. I think everything flows together and one thing that Bruce can do is reveal the truth of things about also influence her to think things happened differently. He makes Holly feel guilty as a way of needing him to get better.

This film also goes into the realm of HP Lovecraft, which I’m all about. I will admit that at the time of writing this, I have read very little of his works, but I’ve seen films that fall into this type of fiction and I’m just onboard for the elder gods and tentacle monsters. There is a cool scene early on where a picture is drawn by one of the girls that are eerily similar to one that Timucin painted that is mirroring something in this film. Callbacks like this are just great writing and I’m all for.

There is also a bit of the issue of pregnancy. Holly had such a traumatic event with her mother and how things happened that I don’t think she really is onboard to have children. It is a legit fear that I can get behind. Timucin just assumes she wants children, which is definitely a somewhat toxic thing to do without discussing it. Bruce and what he does with Holly definitely influences her to alter her thoughts on this.

For this film I thought the pacing was good. We get introduced to everything in an interesting way and I think the more we delve into things the darker they get. As I said, there is some nightmare logic and not everything made sense to me after this first watch, but I definitely enjoyed myself. I never got bored and I will say that I love the ending. The prophecy is fulfilled and I’m glad they didn’t give us a more clinched ending.

Acting for this film was also solid. I thought Poidatz was good. She comes off as someone who has been traumatized, but ever actually dealt with what happened to her. She can’t do everything that a normal person can and I think it is sad. You get hope for her when you think she is getting better, but the bleakness of the film comes through. Sakurai is solid as the leader of the cult. He has enough charisma where you can see people falling for what he is saying, especially those that are broken. He becomes darker as things are revealed. Kapudag is solid as the friend who seems to be trying to find her place in the world. She is taken advantage of by the cult and thinks she has found her place. As the film goes on, I love the realization she deals with. Aksöz I also thought was good and some of that are the flaws of his character. He loves Holly, but he also comes off a bit misogynistic. I thought it adds something to the film for sure. The rest of the cast round out the film for what was needed as well.

Effects are something else I’ve come to expect to be good by Evrenol. They were practical and during the climax of the film, he had me cringing at some things. They look so real and I really love that. There is some CGI at the very end, but I think it actually looks good. This is definitely one of the strongest parts of the film in my opinion.

Now with that said, this was a film I hadn’t heard of, but definitely glad that it was recommended to me, because I really dug it. I think this film is really delving into issues of the human condition and how broken people can be taken advantage of. The cult and the Lovecraftian aspects are solid. I thought the acting was good as were the effects of the film. The pacing is much better for me than Baskin as I never got bored and I was engaged to see what would happen next. This film isn’t as extreme during the climax, but not to say it is tame either. The score of this one really didn’t stand out to me. I would definitely recommend this film if some of these things check the boxes of what you are into. I found this to be a good film and would recommend checking it out.