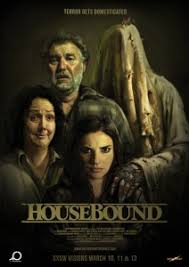 This was a film I checked out as part of a movie club for The Podcast Under the Stairs. I didn’t know a lot about this film, but had heard some people who seen it when it came out and spoke pretty highly about it. I’m now giving it another viewing for TPUTS as part of the Summer Series. The synopsis is a young woman is forced to return to her childhood home after being placed under house arrest, where she suspects that something evil may be lurking.

The film starts with a couple as they try to rob an ATM. The film sets the tone with the comedy as the robbery is bungled. They’re arrested and we see the woman is Kylie Bucknell (Morgana O’Reilly). Her lawyer is trying to get her out of doing jail time by going to rehab, but the judge sees she’s been given this opportunity before. He instead forces her to house arrest with her mother and step-father in her childhood home.

She is brought to the house and we get introduced to the mother, Miriam (Rima Te Wiata) as she crashes into the car that Kylie is in. From there we see the two of them bump heads and don’t really get along. It doesn’t help that Kylie is rude and doesn’t listen to anyone.

We are then introduced that Miriam believes the house is haunted. She calls into a radio program telling about an experience she had where she saw a figure that looked like a sheet in her basement. Kylie doesn’t believe it, but Miriam points out things that she said as a child that coincides with her experiences.

Kylie pushes the boundaries of her tether and this draws the attention of Amos (Glen-Paul Waru). He lives nearby and he is the one that monitors her. Her psychologist that is assigned to her is Dennis (Cameron Rhodes) who is trying to help and get her on a positive track with this experience.

Things take a turn when Kylie hears something in the night that draws her to the basement. A hand grabs his ankle and she freaks out. Amos thinks it could be ghosts and as a paranormal investigator on the side, he tries to prove it. This leads to discovering what this house was before they purchased it and to a murder that occurred there. A dental plate is found and Kylie along with Amos tries to solve who it belongs to. It leads them on a crazy discovery of what is really going on in the house.

Now I have to say, this film is quirky. I really like the structure of Kylie as a character. There are so many layers to her as well as to the film and I think it is really genius. First, she is a criminal and is stuck in the house. That helps to contain it and build tension since she can’t legally leave. Being that she is a criminal, that makes her unreliable and no one believes her. It doesn’t help that she is rude, so that makes people not want to help her as well. There is a subtle reveal later in the film that she diagnosed as being bipolar. She claims it was a lie so she could get drugs, but it is on her file which makes you think that something she sees might not be real as well.

I will admit though I had trouble getting into this film at first. They establish that they could it could be a ghost. At first, that seemed like a cool concept in that she couldn’t leave. I don’t have this issue anymore with this second viewing though. I understand what they’re building for. There is reveal that happens at about the mid-way point hooked and the film does build tension to a solid conclusion. This does meander a bit and I still feel like it is too long.

Something that I wasn’t the biggest fan of in this one was the comedy. It doesn’t work for me overall, but there were a few things here and there that made me chuckle. Now this doesn’t hurt the film though. This is played straight for the most part; where the comedy is there to just kind of give a bit of levity.

To the acting of the film, I really liked O’Reilly. She did piss me off for the first half of the movie. I think that was part of the reason I had trouble getting into the film, as she is such a horrible person that I couldn’t stand what she was doing. I did find her attractive and I could see there was a good person so I have to commend her for that. Wiata was funny with how odd she was. She adds something and I think part of it is that I see a bit of my mother there. Waru was solid as well. Ross Harper I thought was an interesting character and really changes the dynamic of the film once he is introduced. Rhodes is another character that intrigues me as well. There’s a change we see with him that I didn’t see coming the first time around. The rest of the cast rounds out the film for what is needed as well.

Effects of the film were solid as well. They were done practically, which I really liked. There is a scene where someone is stabbed in the leg and it made me cringe for what they do. The blood in the film has a good color and consistency. There are some times that they go overboard with it for a laugh, which I didn’t mind. It takes a bit too long to get these though if I’m honest. Something else I want to give credit here would be the cinematography. I think this movie is shot well.

Something that really didn’t stand out to me was the soundtrack of the film. The use of sound though I wanted to touch on. We hear noises in the wall, which I thought was a good touch. It is an unsettling feeling when they think it is a ghost, but it makes quite the turn when we learn what is really causing it. The use of tape recorders is also something that was solid including a Teddy Ruxpin that adds a creep factor.

Now with that said, this was a movie that the first time I saw it, I liked it, but had my issues. I wasn’t feeling the first half until the reveal of the film. That is when I got sucked in and wanted to see how things would played out. The acting of the film helps. I hated Kylie, but she really turned it around. I do have to give credit for getting a reaction out of me. The comedy doesn’t necessarily land with me for the most part, but it did make me chuckle at times. The pacing of the film was a bit off until that reveal. Once there it builds tension to a solid conclusion. The effects were good. The score of the film didn’t stand out, but the use of sound was solid. I would say this is a solid film from New Zealand and I would say that overall it is above average.