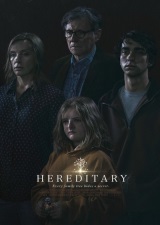 This was a film that I kept seeing the trailer for when I was in the theater seeing other films. I had been expecting for it for some time and was worried that it might not hold up. Now I’m revising this after my second viewing, which was also back in the theater with now a third viewing of the Blu-Ray for the Podcast the Under the Stairs’ Summer Series. The official synopsis is when the matriarch of the Graham family passes away; her daughter’s family begins to unravel cryptic and increasingly terrifying secrets about their ancestry.

I must lead off saying that I felt the film lived up to the hype that it had preceding it. I personally don’t consider this a slow burn, even though some might. It is deliberately paced, which would fall into that camp. I don’t want people who haven’t seen this to think that it is slow. From the beginning of the film, it sets up things that come back in the end. The feeling of foreboding and dread coupled with creepy things happening throughout helped me to enjoy this as much as I do.

The mystery of this film is so deep. We know that Annie (Toni Collette) had a strained relationship with her mother. She relays there is a long line of mental health issues with the family. There is something interesting about this as the movie goes on as well. Annie is worried about her and her children with this. I thought this was a good touch for the film, especially with Annie’s husband Steve (Gabriel Byrne). He is the rock of the family trying to keep everything together. He is also a doctor of the mind from what I gather.

Also in the family are their children. Their son is Peter (Alex Wolff), and their daughter Charlie (Milly Shapiro). Charlie seems to have some sort of mental handicap, but it is never established what it was. It was interesting that when she was born, the grandmother was let back in Annie’s life and insisted on feeding Charlie. It is said as well that she is the favorite. It is Charlie who reveals though that the grandmother wanted her to be a boy. Something else I want to pull in is that Annie does miniatures of scenes for an art gallery. We get back-story filled in with these which was genius for me. There are also interesting editing and transitions with them.

This story also combines elements of grief, which can make us go a little bit crazy in dealing with. Someone like Annie with a family history of mental illness is more susceptible than others to this. I like that the film has a character like Steve trying to deal with everything rationally where Annie starts to think that it could be supernatural. We as the audience get to see everything going on, but I do like the rationality the film uses.

To couple with this though is the editing of the film. This not only looks beautiful, but I love the interesting ways that it uses transitions. We see Annie working on many of them which feature scenes she experienced or of the house they live in. What I like about this is we will get camera zooms into the minis and then the scene will play out which I found to be intriguing. On top of that though, I love that the film uses the miniatures to fill in events we don’t see as well. It builds tension throughout and you can just feel it as things are revealed. I thought the ending was good and well worth what we experienced to get there.

Going along with the editing and the story was the acting, which I thought was amazing. Collette does a great job in this film. You feel and see her deal with grief, but then it morphs into anger. She has a dinner scene that made me go numb for how powerful it was. You also learn more about her character and it is scary. I thought Byrne was good as the counterpoint to her, which the film needed. Wolff does an amazing job in the performance he plays. The fear he deals with was ramped up and I believed it. Going back to Annie and him being the opposites, both are feeling grief, but aren’t dealing with it properly. They harbor resentment toward the other. I also thought that Shapiro was good in the role she played. Ann Dowd also appears in this film as a woman dealing with grief who reaches out to Annie. I thought she did good as well and the rest of the cast rounded out the film for what was needed.

Something I realize I hadn’t brought up is the Rosemary’s Baby vibe. What I mean there is that we see from the beginning this image that is on necklaces for the grandmother and Annie has one. We see this image throughout. The deeper Annie goes into her research, she thinks her mother could have been in a cult. We can’t fully trust her though, as she could be descending into madness. There is also the idea that we don’t know who can be trusted if she is right either.

As for the effects, there aren’t a lot to begin with. Most of them are done practically it would seem with some interesting camera angles. The ones that were done with computers looked to be seamless and I couldn’t tell the difference. I was impressed with what I saw and had no issues there. Something I will bring up again is that the cinematography here is beautiful. We get these interesting switches between night and day that can be jarring, but it fits the tone of the movie as well.

The last part I’ll go into would be the soundtrack. This is something else that fit and was good. It helped to enhance the scenes and gave me a creepy vibe. I won’t say that it is the best soundtrack out there, but it was great for what they needed to do in heightening the tension. I think what makes it effective, is much of the film is in silence. When things are ramping up when it is used. It is quite effective. It might not go down in history, but it works for what this one needed.

Now with that said, this film is great. I was blown away by the complexity of the story and how everything plays out. The atmosphere is one that is tense and just gets worse and worse as it progresses. With every new clue, it becomes that much weirder. There are also so many subtle things that are used here from the lessons in class to little images here and there. I thought the editing helps here. The film is shot beautifully and does some great transitions. Going along with this is the acting, which I thought was excellent as well. There aren’t a lot in the way of effects, but the ones used; both practical and computer are seamless. The score of the film is great in building up the scenes for what they are doing. I think this film is great, but maybe not for everyone. It made me anxious and freaked out for sure, even after this third viewing. I will boldly say this is one of my favorite films in the last decade and one of the best horror movies of all time in my opinion.