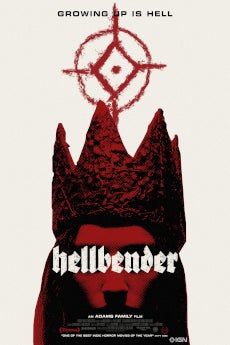 This is a movie that I got turned on to via podcasts I listen to. I heard praise for this one on a few different ones so I made it sure it went on a list of movies to check out. It also was one that was on my radar as it came to Shudder as well. Now I’ve heard an interview of John Adams, if memory serves, as he had another movie come out recently as well. Him along with his family make movies which I think is great. The synopsis for this one is a lonely teen discovers her family’s ties to witchcraft.

We start this off in the past. There are a group of people back in what I’m guessing is the 1600s. They’re hanging a woman for witchcraft. It takes a long time for her to finally suffocate, but then she starts moving again. She then flies away and starts to burn in the process.

The movie then shifts us to modern times. We are following Izzy (Zelda Adams) and her mother, who is played by Toby Poser. They live an isolated existence. They’re house is in the middle of woods. They have signs up to keep people out. They have fun though. Together they have a rock band. They’re also vegans in the most extreme way. Izzy is urning for something more. Her mother is isolating her though. She won’t even let her go into town with her.

Izzy does get out by going for walks in the woods. During one of these, she meets a man, played by John Adams. He is asking for directions as he is lost. He inquires about Izzy’s age, as he has a niece who lives nearby that he thinks is about the same. Mother shows up and sends him away. We see here that she is a witch. She turns this man into dust.

During another of Izzy’s excursions, she comes upon Amber (Lulu Adams). She is swimming in a pool and calls out to Izzy. She accuses her of being a pervert but realizes that she isn’t who she thought. The two of them become friends. Through them hanging out, Izzy meets AJ (Rinzin Thonden) and Ingrid (Khenzom). It also makes her question things. She’s been told that she is sick and can’t be around people. That isn’t true. What she does learn though is that her mother might be protecting others from her and her powers.

That should be enough to flesh out the synopsis and giving you a bit more about some of our characters. This is an interesting story. It isn’t the most complex, but it also doesn’t have to be. This is also perfect to be shot during a pandemic. I’m not sure when this was filmed, but we have a limited cast and most of the people seem to be family from what I’m gathering. That does make it easy for sure. Regardless though, I thought the premise and the character study of Izzy and her mother is one that kept my interest.

Where I want to start then would be with the title, Hellbender. I think that John, Zelda and Poser came together to make an original idea that serves on multiple levels. First, this is the name of the band for Izzy and her mother. On top of that though, this also seems to be a type of witch. I’m not up on my lore for witches so I don’t know if this is something that is more common knowledge for people who do know more. For me though, this is something new. If they did come up with this idea, it feels like they know all the ‘ins and outs’ for it. Even if they don’t, it feels like they do and I appreciate that. What I can share is that there is a mantra that explains their cycle, how they go about reproducing and why they must eat plants. If they eat living things that have blood, it gives them power. This makes for some interesting things once Izzy starts to learn more about what she is and can do.

Another aspect I want to cover is that of power. In the beginning we have Mother in charge with Izzy understanding that. It is your normal mother/daughter dynamic. Izzy urns though to have friends and leave her isolation. It is interesting as Mother thinks she is protecting her, but I also think it creates problems later. As Izzy starts to branch out and learn that her mother is lying, she gains more power. Once she realizes some of these things, Mother decides to reveal the truth and almost train her. This becomes problematic though. The more knowledge that Izzy gains, the more power shifts away from her. There is an interesting dialogue here about children becoming better than their parents. I think that Mother wants it for Izzy, but there is also fear here. The ending sequence is interesting with how things end up.

The last part of the story I want to delve into would be the idea of gaining too much power too quickly. What I mean here is that Izzy being isolated, she leads a sheltered life. She is learning normal enough things though. She learns as a 16 or so year old about the power that her mother has been hiding from her. She starts to test the boundaries. This idea of getting so powerful this quickly, she doesn’t learn to harness it and it consumes her. This feels something like Star Wars with Darth Vader, Carrie or Akira. I like what we are exploring here with this type of story. It is common, but how they go about it here is a bit different which I appreciate.

Where I want to shift then will be to the acting. I’m not going to grade this too harshly as we have an independent cast and this movie isn’t working with the biggest budget. The dialogue gets a bit clunky at times, but that’s probably a combination of writing as well. I did like Zelda as our lead here. I thought she embodied this role. I think it helps the chemistry she has with Poser. They work so well as the focal point of the movie. I thought that Lulu was solid along with John and the rest of the cast. They do well in pushing our two characters to where they end up. Special credit though to Zelda as our lead.

Then the last things to go into would be the cinematography, effects and soundtrack. For the former, I think there are some great shots here. We also get good editing to go with his. I will give credit to this team. It looks much better than their budget. Going along with this, I would say that the practical effects are good. I didn’t have any problems there. My only issue is with the CGI. Not all of it is bad. Some of it did stand out. When they’re doing dream sequences or things of the like, it is surreal. That is fine. There were just a few times that I wasn’t a fan. The last thing then is the soundtrack, which I dug. The music that Izzy and her mother play are great. It is catchy. There is also some eerie, atmospheric music which I also liked. It helped set the tone.

In conclusion, I dug this movie. I’m glad that I listened to the people that were recommending it. We get a story that isn’t the most complex, but it is a character study here that worked. The acting from Zelda Adams is good. I think she plays well of off Poser. The rest of the cast push Izzy as well as her mother to where they end up. I think that the cinematography is great. The soundtrack was close there as well. They both work to set the tone of the movie. If I have an issue, it is only with the CGI. That doesn’t ruin this though. I would say that after this viewing, this is an above average movie that is just missing out on being good in my opinion. I would recommend it and it is one I might check out again before the year ends.