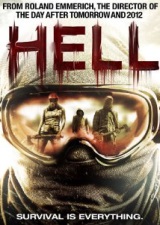 This film begins telling the back-story. In 2010, the sun’s temperature has risen 10 degrees. This has caused water to dry up and it is the greatest commodity. People scavenge for what food remains and will fight for it.

We then go to the group we are following. They are in a car that the windows have been covered up. We have two sisters, the elder played by Hannah Herzsprung and the younger by Lisa Vicari. The man who is driving is played by Lars Eidinger. The vehicle they are in needs to be refilled on fuel. When Eidinger goes out to do it, we see the sun is super bright and they have to cover up.

They get moving again and go to a gas station. As they are looking for supplies, a guy steals things from their trunk. He ends up taking Vicari hostage, the guy being played by Stipe Erceg. Herzsprung and Eidinger get her from him and the two men fight. In the end they decide to do some trading and since Erceg is good with cars, Eidinger asks him to come along.

They work together to clear a road and while searching a car that was crashed, their own car is taken with Vicari inside. When they go to save her, Erceg is taken as well. The car is taken back though and while they are fleeing, Eidinger breaks his foot.

He wants to flee far away and Herzsprung is determined to find her sister and save her from these scavengers who have other plans. Will she find her and Erceg?

First off, I have to say that this film is in German, but you can watch the copy I had with it dubbed over in English. From here, the concept of the film is excellent. It is a scary thing that could possible happen, speaking that our sun is a star that will eventually change.

The acting isn’t spectacular, but it is good enough. I didn’t have any complaints there and the reactions the characters have is completely natural. There is some action, but what I like is that the sun has reduced humans to being rats or cockroaches. Being in the sun physically can hurt so we are forced into the dark.

I would recommend giving this one a viewing. It isn’t super exciting, but it has a really good concept with good enough acting and decent action. It isn’t overly long, but it kind of was boring at times. Definitely not bad by any stretch, but it also wasn’t the best film I’ve seen either. I would still say that it is worth seeing if you’re into this type of film.