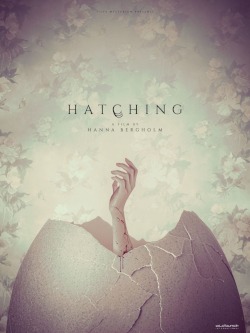 This movie was one I put on a list when I was searching for what horror movies were being shown at Sundance Film Festival this year. When I saw that the Gateway Film Center was getting this one, I made a point to see it. Jaime was freaked out by the trailer so I went solo. I heard limited things from voices I respect which seemed positive. The synopsis is a young gymnast who tries desperately to please her demanding mother discovers a strange egg. She hides it and keeps it warm, but when it hatches, what appears shocks them all.

We start getting to know our family. The mother is a blogger and she videos everything with her phone. She is portrayed by Sophia Heikkilä. She is married to a character played by Jani Volanen. Together they have a son Matias (Oiva Ollila) and a daughter of Tinja (Siiri Solalinna). They seem to be a picturesque family. This is a façade though. Our opening video is interrupted when a bird flies into the living room. It is caught by Tinja and her mother asks for it. She viciously breaks it neck. She then has Tinja throw it into the compost bin.

This bird doesn’t stay there though. Tinja goes out into the night and the bird isn’t where she left it. She finds it in the woods. Its neck is still broken. She puts it out of its misery with a rock. Nearby she finds an egg. She takes it home and keeps it warm.

Where I should go from here is breaking down that the mother is trying to convey through her videos that she has a perfect family. Tinja does gymnastics, but she isn’t very good. She tries her hardest. It doesn’t seem like she likes doing it though. It seems more that she is trying to please her mother. The father here is a bit of a pushover and allows his wife to do whatever she wants. Matias is annoying and the mother doesn’t seem to like him much. Our perfect mother isn’t as great as she thinks either as she is having an affair with Tero (Reino Nordin), a handyman.

Tinja’s only reprieve is this egg. She keeps it warm and it grows large, much bigger than it should. We see that it might be absorbing some of Tinja into it. What appears from it is a monster that looks at Tinja as its mother. It also doesn’t like when others hurt her and will do what it can to protect. This means getting violent.

That is where I’m going to leave my recap as I don’t want to spoil things here. That should do enough to flesh out the synopsis a bit more and introduce our characters. Where I want to go first then would be that I wasn’t sure what I was going to get. Before the movie, I was commenting back and forth with my buddy Tim, who tossed out that this looked Cronenbergian. I thought it did from what I saw coming in. That seems to be a good way to describe part of what we get. What comes from this egg is a hybrid of a human and bird. That is the extent of what I’ll say about it aside from the fact that it goes into body horror. The effects there were well done. It looks like it was a combination of CGI and practical. It looked great to be honest and quite creepy.

What I liked about this movie was the social commentary that I could pull from it. The one that is most prevalent deals the mother of this family. I’m not entirely sure if she makes a living off her blog. That is what is she is shooting for if not. Her gimmick online is that her and family are perfect. She conveys what it is to live in Finland. Under the surface though, this isn’t the case. I liked that the movie is exploring this idea. It is showing that despite what we see on the surface, there are other things going on underneath. The problem here is the pressure that Mother is putting on Tinja. Mother used to be a figure skater. It appeared that she was quite good at it as well. Tinja’s heart isn’t in gymnastics, but she wants her mother’s love. Her mother and Tinja believe if she puts in enough effort, she will be great. We see that isn’t the case. This is an interesting look at the pressures parents can put on their children. I do want to say that Heikkilä does an excellent job in this role. I hated her and her selfishness. That is something I want to give credit to the actor for. It got a reaction out of me.

The character of Tinja is where I want to go next. I’ve already put out there the pressure her mother is putting on her. That is difficult enough. She is also awkward. She doesn’t have friends and the girls that she does gymnastics with mock her. I think part of this goes to her mother. She has Tinja training all the time so the other girls don’t know her. She does befriend her new neighbor, Reetta (Ida Määttänen). Reetta wants to be friends, but it becomes a competition though since she is better at everything than Tinja. I can understand the commentary of not living up to the high expectations here. I also think that Solalinna was good in this portrayal.

Next with the story I want to shift over to this creature that appears from the egg. I’m not going to go too deep as I don’t want to spoil things, but there is an interesting commentary here as well. My first thought was how birds will imprint on their mothers at birth. Tinja is the first thing this creature sees. There is a deeper connection between the two. It is almost a doppelgänger or a symbiotic relationship. They can feel what the other is feeling. This all makes sense in the end. I’d even say that we are getting how the pressure I’ve already brought up jades us. Tinja is becoming the monster that her mother is pushing her to be.

Where I want to go from here would be the cinematography and soundtrack. For the former, this movie is shot beautifully. We are getting this pristine house in the beginning. There are some gross things that happen that tarnish it. I’ll be honest, how this was shot at times made me anxious, because of it. That helped for the atmosphere. What also helps was the soundtrack. I wouldn’t say what we get there is great. It does work though so I will give credit to that. It fit for what the movie needed.

In conclusion, this is a movie that I didn’t love when I left the theater. I thought it was odd, but there were good elements to it. The more I’ve sat on this before writing my review, the more that I’ve enjoyed it. I think that we are getting a simple story, but it is driven by Tinja and her mother. The commentary that comes from their relationship was interesting. There is also this creature that brings its own deeper meaning as well. I’d say that the acting from our leads was good. The rest of the cast pushes them to where they need to end up. I think the cinematography is good. The effects were as well and I’d say the soundtrack fit for what was needed. This is more of an arthouse film for sure. If that’s not up your alley, avoid this one. I think this is a good movie and worth a viewing.