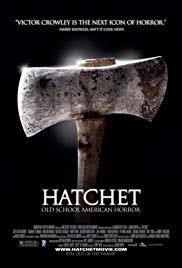 This was a film that I really didn’t know a lot about and it kind of flew under the radar. It came out while I was in college when I wasn’t watching more indie films like this. I know my sister really liked it which intrigued me. After I got into listening to podcasts, I realize there’s a lot of love for this film and the series that has followed it. I finally decided to check it out by making it part of a horror movie challenge I’m participating in. The synopsis is when a group of tourists in a New Orleans haunted swamp tour find themselves stranded in the wilderness, their evening of fun and spooks turns into a horrific nightmare.

We start this with two guys in a boat in the swamp at night. The father is Sampson (Robert Englund) and Ainsley (Joshua Leonard) is his son. They’re out alligator hunting, but they’re having trouble finding this large one in the area. Ainsley is almost bitten by it and he falls back into the boat. They head to shore so he can take a piss, but they’re attacked by something else.

It then shifts to New Orleans. We see the party is going strong for Mardi Gras, but Ben (Joel David Moore) isn’t really enjoying himself. His friend Marcus (Deon Richmond) planned this with some of their other buds to help him get his mind off his girlfriend who broke up with him. Ben doesn’t want to drink so he decides he’s going to seek out this haunted swamp tour that he heard about. Marcus tags along, because it is his best friend, but he’s not happy.

The first place they go is run by Reverend Zombie (Tony Todd), who informs them that the he longer can do these types of tours. He does give them the name of another place that does. They head there and meet Shawn (Parry Shen). He’s putting on a fake accent that’s not great. He allows these two to join on the tour. Also on it is a sleazy director of a ‘girls gone wild’ type show, Doug Shapiro (Joel Murray). With him are two girls who are trying to get famous, Misty (Mercedes McNab) and Jenna (Joleigh Fiore). On the bus is a married couple of Jim (Richard Riehle) and Shannon Permatteo (Patrika Darbo) as well as Marybeth Dunstan (Amara Zaragoza).

Shawn gives them a tour that isn’t that great as we see he really doesn’t know the stories he’s trying to tell. That’s when we realize Marybeth is actually from the area and knows the truth of the legend of Victor Crowley (Kane Hodder). He is supposed to be haunting the woods by the swamp. We soon realize that the legend is true.

This was a film that I’m actually surprised it took me this long to actually check out. Writer/director Adam Green is someone I like. He does a great job at making a film that feels like 80’s slashers, which I would watch growing up, but putting it into the a modern setting. On top of that, the setting of this movie is great as well for isolating our characters and making their technology not work.

To start breaking this down, this takes place in the swamps outside of New Orleans. It really does feel like that, so that is definitely good. Now I’ve never been to this area, but I have family from West Virginia so I assume that it is probably isolated and backwoods so something like this could feasible happen. Victor is really just a deformed child that had some bad things happened to which makes him bitter. He grew into his body which make him strong.

Another aspect to the story that I like is the mythology of Victor and how it is relayed to us. It is thought that Victor died in a fire so when Marybeth, who lives in the area, tells the story they think he’s a ghost. I just feel this is similar to Jason Voorhees in that he had a traumatic event happen to him and he’s been fending for himself in the woods. I do think the psychology of what happened to him has him killing those that come around, but definitely just a man.

That moves to me to the pacing of the film, which is good. We get some early deaths, which are fun to see. We don’t see what is doing it, but we get a glimpse that it is human. We then get to meet all of the characters that are going to be stranded, which happens soon after. The deaths pick up from there. It has a low running time of around 80 minutes, which definitely works since we never get a lull. There are some bad, slasher decisions made, but I don’t haveissues there. If I was in this situation, I could see from fear doing some things so it is believable. I didn’t care for how abrupt the ending was. It is saved knowing there are sequels, but I’m looking at this as a stand alone like it was originally intended.

The acting is something that I think is pretty good across the board as well. I like that Moore is a bit awkward and has a lot of pressure put on him by his friends. He clearly is still not over his ex, so it really is messing with him. Zaragoza is solid as the female lead that is there to find her family and knows the lore of the area. Her progression in growing to tolerate Ben was believable as well. I thought Richmond, McNab, Shen, Murray, Fiore, Riehle and Darbo are all solid as the group that Victor picks off. Some are annoying, but they’re all distinct and I can get behind that. Hodder is great as Mr. Crowley as well as the killer in this movie. It is cool to see cameos by Englund, Leonard, Todd and John Carl Buechler as well as they help round out this film for what was needed.

That moves me to the effects that we get here, which I’m not going to lie are probably the best part. Green knows if you want to make a good slasher, it comes down to the deaths, blood and gore. We get some normal slasher kills, but we also get some really brutal ones that kept my attention. It is highly creative and I was really on-board for that. It is also shot very well and had no issues there.

Now with that said, I had a lot of fun with this film. It really does feel like a slasher film made by a guy who understands the subgenre and really just wanted to make a movie that ticked off all of the boxes that was fun. We definitely get that here. I think Victor Crowly is an interesting killer that at this time is based in reality and is just freakishly strong. I like the premise we get here of how they get stranded in the woods and swamp. The acting is pretty solid and they’re distinct, so some I liked and some I hated. There are some good cameos as well. It never gets boring and the effects are amazing. I did have a slight issue with the abrupt ending. The soundtrack fit for what was needed and I really noticed it during the climax for sure. I think this is a really good movie, but only if you like slasher films like this. It might be a bit bloody for some that aren’t into that type of thing.