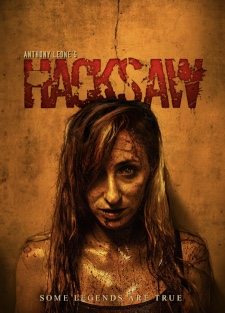 This was a movie that I ended up watching as my first 2021 horror film release officially.  I didn’t know a lot about it coming aside from its release date and that it fell into the horror genre. The rating for it did pop up when I was doing a bit of research, which did make me leery about seeing it. Regardless, I decided to give it chance to see if there was potential. The synopsis is a young couple on a road trip takes a detour to the site where a notorious murderer, Ed ‘Hacksaw’ Crowe, became an urban legend. They quickly find the legend may not be quite as dead as they were counting on.

For this movie, start off with an interesting cold open. We get a woman that is tied down and has plastic around her. It then does well in showing good practical effects. I will also give credit here as to how it was shot, using what the masters back in the day would do with close ups to help with the realism.

We then meet our young couple. There is Ashley (Amy Cay) and Tommy (Brian Patrick Butler). He recently proposed so they’re going to visit her family to share the news. Tommy wants to fly where Ashley wants to drive. Much like many relationships, they do what she wants and he’s going to make sure she hears about it the whole way.

Interspersed here we have a news report from a reporter named Max Hart (George Jac). Through this we get a bit of the back-story about the hospital where Ed Crowe murdered his victims. The building has been approved to be torn down and many in the city are quite happy about this. We also learn though that Ed didn’t act alone, he had a cult of followers that helped him.

On their journey, Ashley and Tommy hear the report about the building and he wants to stop off to see it. She is against this, but he uses a guilt trip that changes her mind since they’ve stopped off so she could take pictures for social media. There’s not much to see with the building so Tommy is looking for a way in. She isn’t on board with this and goes to get food. It is then that Tommy meets a strange man, portrayed by Michael C. Burgess, who for $20 shows him a way. This is where the true nightmare begins for this couple as the hospital isn’t as empty as they thought.

Now that is where I’m going to leave my recap for the movie. I’ll be honest here, what I’ve given there is about 45 of the 68-minute runtime. It does make sense to see that this is writer/director Anthony Leone’s 1st feature film. He does do some good things here, but it is lacking a bit as well.

I’ll start with a positive. I think the idea of this killer, Ed ‘Hacksaw’ Crowe, is an interesting one. I like that he worked in this hospital before he snapped. I also like that he doesn’t work alone. He has a cult of followers and it is even more interesting when this movie reveals the truth behind that. There is a special thanks in the credits to Tobe Hooper and it appears that Leone is a fan of Rob Zombie as well. I can really see the influence here of The Texas Chain Saw Massacre. What I would have liked though is more of this fleshed out personally. I’m sure we have the low running time is partially budgetary but could have been an aspect to focus a little more on.

Going from there, this movie is boring unfortunately. We focus a lot of this on the relationship between Ashley and Tommy. To be honest, I didn’t like either of them as all we see for the most part is them bickering. I get this to help us to learn about them as characters, but all it made me do is hate them in the end. For a movie like this, you need me to get behind them as this is a pseudo-slasher. The other thing is the character of Max. Another guy that I know he’s there to fill in the back-story of the location and our villain, but another character that I hated. There feels like a lot of filler here which isn’t good to feel with a movie with as short of a runtime as this one has.

To get back to another positive, it would be effects. I’ve already gave some praise earlier, but the opening sequence made me uncomfortable. It does feel like this movie was based around this and the ending sequences. I will say I’m glad they went practical there as both worked for me. Not all this does though. The movie is found footage for a good stretch. As I’ve said my piece on the characters that we focus on, so it doesn’t necessarily work for me. This feels mostly to be budgetary before it switches to a normal movie where we are watching what is happening. It probably should have stuck with one or the other to fully work as it is slightly jarring to be honest.

Now I’ve already said a bit about the characters, but I’ll go to the acting next. What I will say is that I don’t think the performances are horrible. I do think that Cay is solid in showing fear as things ramp up and I feel I know her character. Butler much in the same way, I just don’t like how their characters are written. Burgess is solid in being creepy, but we don’t get a lot of him. The rest just round this out for what is needed. No one is good here, but they’re fine in my opinion.

The last thing to go over briefly would be the soundtrack. I love the track they have underneath the opening and closing scenes of the movie. That just has a creepy vibe that added to the atmosphere. From what I remember, the found-footage aspects just are using ambient noise which is good for the realism. I would say that the rest fits for what is needed.

In conclusion, this feels like someone’s first feature film. I think the story is lacking, but there is a good foundation there that just needed to be developed more. The characters are weak in my opinion, but the performances are fine. The practical effects were good and the soundtrack during those scenes is as well. I just think that it is lacking in most other categories unfortunately. Overall, I would say this is a below average movie for me. To be positive though, I would watch more from this director as the good aspects are promising for sure.