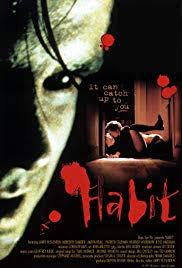 This was a film that I actually never heard of. It came up as part of the best of the 1990’s series for a podcast that I am participating in. I was pleasantly surprised to see that Larry Fessenden was the writer, director and star of the film, because I have definitely seen some of his later works. The synopsis for this film is its autumn in New York. Sam (Fessenden) has broken up with his girlfriend and his father has recently passed away. World-weary and sloppy drunk, he finds solace in the arms of Anna (Meredith Snaider), a mysterious woman who draws him into a nightmare of addiction and madness.

We start this film actually with Sam as he is taking care of some affairs at his father’s apartment. From there he goes to a friend’s house for a Halloween party. Nick (Aaron Beall) and Rae (Patricia Coleman) are the ones that are throwing the party. Through some interactions we learn that Sam has a bit of issue with abusing alcohol. We see him as he gets pretty drunk and he comes in contact with Anna. She seems interested in him and the two of them leave. He goes to show her some pictures, realizing he took the wrong coat. He asks her to come back to the apartment to get his and she instead tells him that she will wait for him. She does give him her number before he heads back up. She’s gone when he returns though.

Sam is a manager at a local bar and we see him at work. He is friends with Lenny (Jesse Hartman) who tells him about a girl he hooked up. She took him to a boat that she is living on, which we see in the harbor. Lenny seems a bit off, like he’s coming off a bender.

We then see Sam as he is moving his ex-girlfriend Liza (Heather Woodbury) into a new apartment. The two friends that are helping them are giving Sam the cold shoulder and we kind of learn that she is moving out due to Sam’s drinking. She still has feelings for him, but she wants him to get his life back together.

The two of them start a fling, which involves more rough sex and her biting to the point of continuing to draw blood. They don’t really use protection and Sam starts to act more like Lenny before he disappeared. Liza and Sam’s friends are concerned he’s drinking too much, but we are given some subtle hints that Anna might be hiding a bit more than what she’s letting on.

Now if you know me, I’m a big fan of arthouse films, a love that I didn’t realize I had until just recently. This film definitely falls into this and I’m not going to lie, I loved the low budget feel. This really kind of feels like a latter Frank Hennenlotter feel, as Fassenden does a great job at bringing the feel of New York City to his film. It almost feels like a character. I saw that a synopsis calls Sam a Bohemian, which I definitely get that vibe. You can feel how he’s living in NYC.

Going from there, you can see that Sam is struggling. He has a problem with alcohol, which I can’t fault him too much. His father passed away and his girlfriend left him, he at first is seeking solace in the bottle. When Anna comes along, he turns his addiction toward her. I think this is part grief, but I would bet that he just has an addictive personality from the beginning. With the title of Habit, it really makes sense in more than one way.

What I also enjoy about this story, is that you really don’t know if Anna is a vampire or not. There is talk of a full moon at one point and there are wolves that we see in Central Park. I like that there are subtle hints if you can pick up on them about vampire lore. I’m a big fan of The Addiction which comes out during this decade as well where they are looking at vampirism as almost a drug addiction. During the 80’s there was the war on drugs, but we saw that it really went into the 90’s well. I think it is quite clever to look at it like an addiction like we do in this film.

I do have to say though this film does have some issues for me. I think that it really kind of loses its way later in the film. The buildup for me was so good in establishing Sam. I don’t completely think that the film becomes boring though. It actually becomes a bit manic, but it kind of makes sense. Sam has fully slipped into his addiction of Anna and she is draining him of blood. It almost kind of becomes a fever dream to show us what he is experiencing. I will admit though, as much as I like this aspect, it did become a bit problematic for me and I did lose a bit of interest. The climax and how it ends though does bring me back in for sure. I wasn’t expecting it to end exactly how it does.

Before I move on here, I want to wrap back around. There is a scene where Sam talks about his father to a group of his friends. A man asks him about Liza and he carries on like they’re still together, but Anna shows up. There is a scene where she shows an artifact and everyone there is intrigued. The old man has something to tell Sam, but we never get what that was. I think that is a missed opportunity for film to go a couple different ways that could have kept me in it.

As for the acting, I thought this was pretty solid. Fassenden, if you end up reading this, I’m sorry, but I feel like you weren’t acting here. I mean this in the best way possible, because I thought you were this character. You play someone who is dealing with alcoholism so well that it feels like something you might have dealt with. If not, you killed this role. If you did, I commend you for that portrayal as it probably wasn’t easy. Snaider I thought was really solid as well. I like how subdued she plays this role. It gives a feel that she could be this monstrous creature or she could just be someone who is odd. I thought it really added something to the film for me. I thought the rest of the cast was fine and rounded out the film for what was needed.

There weren’t really a lot in the way of effects in this film. It also wasn’t that type of film, as I feel it is more about the atmosphere, setting and the acting. I do think that the blood we get in the film looked real. Some of the interactions between Anna and Sam that were violent were good. I also like the look of her during the climax as well. It really doesn’t look cheesy at all, which I’m thankfully for. I thought the film was shot really well in a low budget feeling way. It adds a more personal feel to the film.

Now with that said, this was film that I came in pretty blind, just knowing who Fessenden is. I do feel that this is really an under talked about, arthouse film about vampires. I like the set up, but I do feel that it loses its way. I really like the idea and the things that Sam is dealing with. His coping with his issues drives him to the addiction that becomes much more dangerous for sure. I think that Fessenden is really this character and Snaider was solid in her performance as well. The effects are subtle and yet they add an element of realism through this. The look of the film is really good. The soundtrack of the film really didn’t stand out, but it did fit the film for what was needed. I ended up really enjoying this film and overall I’d say that this is above average. It will be one I’d like to revisit now that I know how it plays out as well.