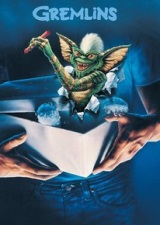 This film is one that I actually didn’t see until I was a teen. It always seemed to be on the movie channels, so I would catch it at different parts. It really wasn’t until I was in college and picked up the DVD that I finally saw it start to finish. For me, I was a bigger fan of the sequel, even though it isn’t as good due to nostalgia as my dad recorded it on VHS. My sister and I would watch it all the time. I did give this a rewatch as Jaime was terrified of this movie as a kid, so we watched it for a special episode of Journey with a Cinephile: A Horror Movie Podcast. The synopsis here is a boy inadvertently breaks three important rules concerning his new pet and unleashes a horde of malevolently mischievous monsters on a small town.

We begins with a voice-over narration from Randall Peltzer (Hoyt Axton). He is telling us a story that we are about to see. He is an inventor and he is trying to not only find a place to sell his merchandise, but get a Christmas gift for his son. He is in New York City and more specifically, Chinatown. He is following a boy to his grandfather’s shop.

There we meet the old man of Mr. Wing (Keye Luke). Randall tries to peddle to him, but keeps hearing something. He ends up searching out the noise to find a cute little creature. We learn that it is a Mogwai. Randall tries to buy it for $200, but Mr. Wing states it is not for sale. He’s adamant that in order to take care of this creature, it takes a lot of responsibility. The boy ends up selling it to him without his grandfather knowing. He also tells him the three rules to take care of it: keep it out of bright light, do not get it wet and do not feed it after midnight.

We then are introduced to the town of Kingston Falls. Some important characters are Sheriff Frank (Scott Brady), Pete Fountaine (Corey Feldman) who’s dad runs the local Christmas tree lot and then we meet the rest of the Peltzer family. His son is Billy (Zach Galligan) and his wife is Lynn (Frances Lee McCain).

Billy is late for work and his car won’t start. He has a Volkswagen Beetle, that looks a bit rough. His neighbor comes over, Murray Futterman (Dick Miller). We learn he is out of work, but does plow the streets with his tractor. He makes comments about Billy having a foreign car and that’s why it isn’t starting. He ends up walking to work with his dog. Billy works at the local bank along with Kate Beringer (Phoebe Cates). He has a crush on her and it seems like it is mutual.

While at work we meet the scrooge of the town. She is an elderly woman of Ruby Deagle (Polly Holliday). She comes in and is mean to Billy. She claims his dog has ruined her snowman and she wants the animal put to sleep. There is a scene where the dog attacks her. Billy is yelled at by his boss, Mr. Corben (Edward Andrews), as well as supervisor, Gerald Hopkins (Judge Reinhold).

That night when Randall comes home, he presents the Mogwai named Gizmo (Howie Mandell) to Billy. He tells him the rules in order to care for this rare creature. Things don’t go as a planned though. Gizmo always seems to be getting hit with bright lights. Billy shows it to Pete who accidentally gets it wet. The ones that come from it are mean unlike Gizmo. They also play a trick on Billy that when they eat after midnight, they become gremlins. From here they wreck havoc on the town. Billy along with Kate and Gizmo do what they can to stop them before it is too late.

What I think I want to state first is that I really like this film. This is one is a borderline family friendly, Christmas horror film. It is just interesting to hear that Jaime was terrified of this and that it gave her nightmares. I mean the creatures look creepy. They do some pretty horrible stuff as well. This is an interesting movie that is considered a comedy, but it is one of those that isn’t in the traditional sense. It is more of a dark comedy.

To start breaking this down though really, I love the social commentary that is here. Randall won’t take no for an answer, Mr. Wing and his shop is struggling for money so his grandson sells Gizmo. This is really an interesting look at capitalism and the dangers of it. Enough money will sway anyone. Billy and his family though are typical Americans. They aren’t ready for the responsibility to take on a creature like this. Mr. Wing does see something in Billy, just not yet. He needs to grow up a bit more.

I will admit the rules are a little bit farfetched, but if you can get past that. I can as this is a fun film. An issue here would be that no one realized while making this that snow is just water that is frozen into this form. The gremlins are neck deep in it at different times and they don’t multiple there. Another is when the dog licks Gizmo, as saliva is wet and partially water. Why doesn’t that make them multiple? It is just a plot-hole. The sequel brings up an interesting idea as well with the after midnight concept. Do time zones matter? These don’t ruin the movie for me, but just something that I noticed at nit-picks.

To get back to some positives I love the comedy this film has. The gremlins parody a lot of different things which makes this film great for adults who get the references. I also don’t think the film is too scary for older children as well. I can see how this one helped influence the creation of the PG-13 rating. To shift this to another tone of the movie is that Kate’s back-story is quite dark. It doesn’t necessarily fit aside from having a character who hates Christmas. I personally love it since it is legitimately in the movie, but it feels out of place.

I think that next I’ll go to the effects. I love that this came out in the 80’s and that we get practical effects. The Mogwai is a cute creature and I love what they were able to do with them. I know they use extreme close-ups for some of this. Pulling in the gremlins here as well, I love that they incorporate different types of puppets, animatronics and even stop-motion photography. It really helps to bring these creatures to life so I give credit to the cinematography as well. The movie doesn’t have a lot of blood, but it doesn’t need it. It is effective all the same.

The last thing that I want to go into would be the soundtrack. I love the theme song to this movie. What works even more with it is that they use different styles of it and use different tempos for it to fit the mood of the scene. On top of that, they even have Gizmo singing a sweet version of it and the gremlins a more menacing take on it. It is really done very well in my opinion and makes the theme classic.

Now with that said, I really like this film. Something I really am a fan of is taking a joyous holiday and making a creature feature like we get here. I think the creatures look great, the Mogwai are cute and makes for an enjoyable film. What they were able to do with practical effects is great. The story moves fast and doesn’t have a lot of down time. The rules are little bit outrageous at times and they don’t necessarily follow them, but if you can get past that it is worth a viewing. I personally feel that this is a pretty family friendly horror film as well. I would recommend giving this film a viewing. This is a great film in my opinion.