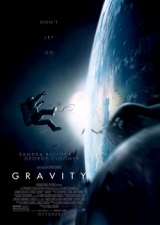 This film begins in space. There is a team of astronauts that are working on the Hubble space telescope. We have a doctor who worked in a hospital and came up with what is being put on the telescope; she is played by Sandra Bullock. George Clooney is a veteran astronaut who is supervising. There is another guy who is helping out as well. Ed Harris is the voice of mission control who keeps on top of everything that is going on.

Harris keeps filling everyone in on a situation where there is something about a missile being shot by the Russians to take care of an old spy satellite. Bullock is finicky about being in space while Clooney loves it. He is flying around as Bullock tries to do her work. It isn’t going as smoothly as she would like.

Harris informs them that the destruction of the satellite didn’t go as planned. A bunch of debris is heading their way. It pelts the telescope and what Bullock is latched to breaks away. She begins to spin away with it into space. Clooney keeps telling her to unlatch herself and she finally does. She moves away from the metal object and spins into space. She has all, but given up when she decides she wants to survive and calms down. She tells Clooney where she is. He finds her and she tethers herself to him.

They find the other member of their team and he is dead. They try to get back to their spaceship. They have lost communication with mission control so they are trying to get back to Earth without their help. When they get back to their spaceship, they find that it is destroyed and everyone is dead. They decide to try for the International Space Station. Clooney tries to help Bullock with her breathing since her oxygen is running low and she is eating up a lot more of it while panicking.

They reach the space station and Clooney has run out of fuel for his boosters. They crash into it and try to latch on before they go off into space. Bullock’s tether to Clooney breaks, but she gets her foot caught in the parachute that was fired off prematurely. She catches the rope that connected her to Clooney, but he unlatches himself, knowing that he is pulling her with him and there’s nothing he can do. He goes off into space. Bullock is out of oxygen and barely gets inside the space station.

Bullock tries to free the pod to get to the Chinese space station and back to Earth. She is caught in the parachute that saved her though. She has to leave the pod to get it free and the debris shower has come back around Earth. When she finally gets it free, she finds that the pod is out of fuel. Will she figure out a way to get it moving or will she die in space? We learn that Bullock lost her daughter and hasn’t been living life. Will that cause her to give up or will she figure out that she wants to live?

I have to say that this is has a great and scary concept. Being stuck in space without a way back is quite chilling. The realism of this film is good as well, in that they show how it would sound in space, how sound doesn’t carry and how dangerous that can be. I liked the music that is coupled with scenes as well, it does set the mood and helps to build tension.

Now my problem with the film is that the acting was quite flat. Since there isn’t much of a story, I was expecting more emotion from the actors and we don’t get that much. I know Bullock is usually a solid emotional actress, but I didn’t see that. I think they tried to portray her as an emotionless woman after what happened to her daughter, but there isn’t enough arch to show her change. That concept does help the film, but I was disappointed by its execution.

I would say though that you should probably give this film a viewing. If you want to see a scary situation that shows realism of the scenario, then definitely watch this. If you want a great film with great acting, this one comes up short. Not horrible by any stretch, but it isn’t too long and worth a viewing.