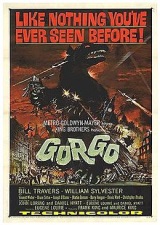 This film is one I never heard of until my mother recommended it. I remember seeing it right after college, but hadn’t seen it since then. I decided to give it a rewatch since it is from 1961 as part of my Odyssey Through the Ones. The synopsis here is greedy sailors capture a giant lizard off the coast of Ireland and sells it to a London circus. Then its mother shows up.

Much like the synopsis states, we begin on a ship just off the coast of Ireland. The sailor in charge here is Sam Slade (William Sylvester). He and his crew are concerned with a member of their crew, Joe Ryan (Bill Travers), who is scuba diving. It appears they’re looking for something. In the distance, they’re looking at something that is causing the water to ripple. They then feel an earthquake and then a volcano erupts. Their ship is damaged so they go to a nearby island to make repairs.

On their way they see dead fish that they’ve never seen before. They look almost prehistoric. They do not receive a warm welcome when they arrive in the village and are treated kind of poorly by the harbor master, a Dr. McCartin (Christopher Rhodes). He is an archeologist and has a room of priceless artifacts. He tells the duo they need to leave without having a permit, even though they need time to repair their vessel. They also befriend a boy who helps McCartin, Sean (Vincent Winter), a native of the island.

The day they go back to their ship, something happens in the water. One of the divers is missing and he is found by Joe and Sam. They find he has some gold coins in his hand. This causes them to believe treasure is why they’re asked to leave, but when they go under the water, they make a discovery. There is a giant lizard that scared the diver to death.

The two men tell McCartin that they will take care of the monster for him if he gives them some of the treasure that he found at the bottom of the sea. He doesn’t like it, but there isn’t much that he can do. Sean tries to convince them to not do what they’re planning. Joe really wants to catch it and can see the potential money they can make from it.

That is what they do. They realize that fire can drive it back and end up catching it using a submarine they have as well as net. A couple of professors from Dublin think they’ve convinced the two to sell them the creature, but Joe has something else in mind. He sells it to Dorkin (Martin Benson) and his circus. Much like the synopsis states, this isn’t the only creature. A couple of professors in London reveal this is actually a baby and its parent could be quite a bit larger.

That is where I’m going to leave my recap of this movie. It is funny that when I was looking at my thoughts from the first time I saw that, there are some things that still stuck with me. This movie seems to be a British take on the kaiju film. This really does feel like a knock off Godzilla. I don’t mean that as a bad thing though, as I think this movie does some good things well.

This aspect is where I want to start. The movie has a social commentary on greed that I picked up on. The synopsis states that it is both Joe and Sam, I don’t agree with that. Joe is really the one that is driving this to capture and sell. Sam goes along with it. He is also the one that when things start to fall apart, he’s the one that wants to make it right well before his counterpart. I’d even say that this movie is borrowing from King Kong in this respect as well, since they’re selling it as an attraction.

I also really like this idea of nature vs. humanity. They of course catch this creature that they dubbed Gorgo. They really can’t do much to control it aside from using what seems to be a steal net and tranquilizers. I really like when the much larger parent shows up, no matter what they do to stop it, it really is the unstoppable force. There are some of the destruction sequences in London that really reminded me of Godzilla. What I like here as well that Gorgo destroys things like London Bridge, Big Ben and even the giant Ferris wheel there. It helps give this movie more of a feel with these iconic places being trampled with ease.

Since I’ve been going over the creature as much as I have been, I’ll breakdown the effects. Being from 61, they really didn’t have CGI or computers so things were practical. I’m assuming it is a person in a suit. Despite it not looking great or all that real, there is charm there so I will give credit to that. They also looked to use miniatures for the destruction of London and I can respect that as well. It looks better than bad CGI. What I did have an issue with though would be the green screen they used. I don’t want to say that it was all bad, but there was quite a bit that I could tell and didn’t look great. Aside from that the cinematography is fine.

Then the last thing to go over would be the acting. I don’t think anyone here is great, but they do well with being these characters. Travers is solid as this greedy sailor who can convince those around him it is the best course of action for them to make money. Sylvester works for me as his counterpart who is a bit weaker to peer pressure. I also like his breakdown when London is being destroyed and wanting to release the baby Gorgo. Winter is solid as the boy and the rest of the cast rounded this out for what was needed in my opinion.

In conclusion here, I think that this is a solid rip-off of Godzilla. This really does feel like taking parts of King Kong as well while making this movie really feel British. The acting gives us interesting enough characters around the giant monsters that we get. There is some relevant social commentary. The effects I have some slight issues, but nothing that really ruins it for me. The soundtrack is also fine for what was needed and sound design, especially from the creature works. Overall I would say this is an above average movie. It is fun, especially if you like kaiju films, but don’t expect too much.