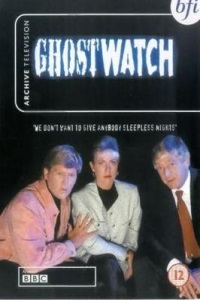 This was a movie that I had never heard of until I got into listening to podcasts. It is one that would fall into that found footage/mockumentary sub-genre. I have been meaning to watch it for sometime, but never got around to it. This was mostly due to the fact that it is hard to see in the United States. I’ve finally gotten that chance to actually seek this out thanks to Where to Begin With series and Duncan over on the TPUTS Collective. The synopsis here is the BBC gives over a whole evening to an ‘investigation into the supernatural’. Four respected presenters and a camera crew attempt to discover the truth behind ‘the most haunted house in Britain’, expecting a light-hearted scare or two and probably uncovering of a hoax. Ninety minutes later the BBC and the country was changed with the consequences still felt today.

To give a bit of back-story to what we have here. I knew from what I heard about this movie that the four presenters from the BBC were actually respected and well known. Being from the US and 5 when this came out, I don’t really know them so that prior knowledge was a bit helpful coming in. This movie though is taking place on Halloween. Michael Parkinson (Himself) is hosting in studio where he is joined by a parapsychologist of Dr. Lin Pascoe (Gillian Bevan). Leading up, she has been interviewing and investigating the family that is being haunted, trying to see what she can learn about the phenomena.

On location there is Sarah Greene (Herself) who is going to stay the night in the house along with the family that lives there. We have Pamela Early (Brid Brennan) with her two daughters, Suzanne (Michelle Wesson) and Kim (Cherise Wesson). Sarah’s husband is also in studio, being in charge of the phones. There is also another interviewer on location of Craig Charles (Himself).

The show starts off with giving us back-story of what the Early family has been experiencing which includes seeing footage from the house as well as interviews with them from previously. We also get what Dr. Pascoe has experienced while researching. They include a Dr. Emilio Sylvestrii (Colin Stinton) from the United States to try to debunk what he has been seeing from the data provided.

As the night goes on, we get to see and hear some creepy things. The question though really becomes, is what we are seeing real or is this footage doctored? Some of the callers seem to be experiencing similar things to what this family has been. Is this haunting real or sparking a mass hysteria similar to War of the Worlds.

That is where I’m going to leave my recap and where I want to start my analysis here with is how well this movie is doing with making it feel like a documentary. While watching, it does give me vibes of watching like Unsolved Mysteries or 60 Minutes. It is also pretty impressive to get Parkinson, Greene, Smith and Charles involved. This movie would really be something that probably couldn’t happen today with the internet. It feels similar to how people could believe the Blair Witch Project with how well they are selling it. I also brought up War of the Worlds as my understanding is this movie here had a similar effect in the UK.

Where I wanted to go next would be what inspired this movie, which is the Enfield poltergeist. Now I’m pretty sure I’ve seen an episode of A Haunting that covered that event and this of course was mostly the story we got in The Conjuring 2. Going into that story here would lead to potential spoilers so I don’t want to do that. What I will say is that I like this family that is broken a bit. Pamela is divorced and has 2 daughters like the source material. Dr. Pascoe states this could be why they’re susceptible to the haunting. There are some more similarities with how the haunting plays out, including the entity itself. I also feel that this movie is trying to use those that know the true event as swerve as well.

I do have a drawback to this movie though. It is a bit slow if I’m going to be honest. What I will say though is that I feel having seen it to completion that it needed to be. The movie lulled me in and I was wondering if it was going to ramp up at all. I feel due to that it lures you into a false sense of security before going crazy in the end. I wasn’t expecting where it ended and I’ll be honest, it made me feel uncomfortable.

What are effective here in this would be the effects. Early on we see a video in the bedroom of the two girls. The callers notice something so they actually play it back for us to see. This is something that gets under my skin. What makes it even better though is that if you pay attention to things in the background, you can see this image more and more. Now that I’ve seen this movie, I really want to give it a rewatch as I know there are more. I’ll also give credit to the cinematography for this as well. This is also aided as well by the sound design. They do some really good things with banging, cats noises and things to this effect that make it even creepier.

Really the last thing that I should go over would be the acting. I’ve already said that Parkinson, Greene, Smith and Charles play themselves. I don’t have any issues there as they feel real. Being that this is a fictional report they’re doing, I can see their talent when it comes to the real thing. Bevan was good though and what I especially like about her is that she is challenged a few times in this movie. She believes the haunting is real, but the evidence isn’t looking good. I like that she doesn’t back down. I did hear another person’s thought and I can say I did agree that she doesn’t come off as professional at all times. She really wants to prove this so it does hurt her case for me. Brennan is solid along with the Wesson sisters. I thought the cast does a really good in selling the realism here.

In conclusion here, I’m glad that I could finally tick this one off my of blind spot list. It is an interesting concept to borrow from a real life ‘haunting’, make it into a mockumentary, but while getting real reporters/presenters from the BBC. That really helps to sell the realism. The acting also helps to build this. The cinematography was well done. We don’t get a lot of effects, but we don’t need them. The sound design helps for that eerie vibe. If I have any negatives, it is a bit slow, but I think that will be cleared up with a second viewing. I’m sure there are things that I missed. After this viewing, I would say this is a good movie and worth a viewing if you’ve never seen it.