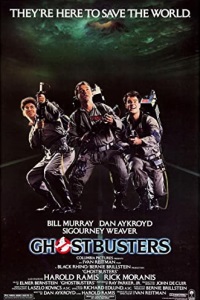 This movie here is, of course, a classic. I’ve seen this movie many times in my day along with its sequel, but I’m not sure when I first saw it. What helped is that this always seemed to be on the movie channels, so whenever I was bored, it would go on. This would be the first time that I’m reviewing it with a critical eye though. The synopsis is that three former parapsychology professors set up shop as a unique ghost removal service.

We start this movie off getting to meet our main characters. Dr. Peter Venkman (Bill Murray) is conducting an experiment with two students. He isn’t handling this properly according to research standards as he is using it to hit on the female student. They are interrupted when Dr. Raymond Stantz (Dan Aykroyd) shows up to state they have a call about a ghost being found at the local library. We get to see it messing around with the librarian who is terrified. Already there is their third member, Dr. Egon Spengler (Harold Ramis). They do what they can to try to get rid of it, but it amounts to just getting samples.

Their lives change when their funding at the school is cut and they have to find some way to make ends meet. Venkman convinces Ray to take a third mortgage out on his parent’s house so they can start a business, Ghostbusters. Egon believes he’s developed power packs that will allow them to contain ghosts until they can trap them and have a storage facility for it as well.

The movie also introduces us to Dana Barrett (Sigourney Weaver). She goes shopping and when she gets to her apartment, she is held up by her neighbor, Louis Tully (Rick Moranis). He’s a bit of a socially awkward guy and nerdy, but Dana does her best to humor him. She is freaked out though when her eggs she just bought crack, cook on the counter and in the refrigerator is a doorway to another world. This brings her to the Ghostbusters for their help. Venkman takes the initiative to get to know her better.

Things take a turn for these guys when their business takes off. This also draws the attention of the EPA and brings Walter Peck (William Atherton) to their door. All during this, Ray looks into the history of the building that Dana lives in as well as Egon into texts about some of the names that she heard before fleeing. It points to a much bigger problem that could hold the fate of New York City or even the world.

Now I decided to go a bit lighter on the recap here as let’s be honest, most everyone has seen this movie already. It is a classic and for many people, a staple. As I’ve said, I’ve seen this movie many times, but rarely all the way through. It is one I can pop in at any time, enjoy what I’m seeing and then dip out as well. What is interesting is that I’ve probably seen the sequel more though as that one seemed to be on a bit more than this one.

Where I’ll go next would be what I love about this movie. These guys are scientists. I love how seriously they take the paranormal here. Now I’ve heard that the basis of the story was from Aykroyd and his family, which does make sense. When they are using scientific words and phrases to explain these things, I believe them. Part of this is how good of actors they are, but also it feels like what they’re saying is true. The equipment they’re using is science fiction, yet I can just buy it. I have to give credit to how well this is written. It is a comedy first, but the care was taken here.

Then the last bit from the story I want to delve into is the mythology used. I’ve never looked into Gozer (Slavitza Jovan) to see if this was a real entity from the ancient world or if this was something made up for the movie. I like that it establishes the lore regardless. That is again a big thing for me. If I feel that you know everything about what you’re doing, even if you don’t, then I can believe what you are selling. I also like the idea that this building that Dana is living in was set up a certain way that makes me feel like Rosemary’s Baby or something like that as well.

I will move away from the story to go to the acting. I think our stars here are great. Murray has such dry humor that I love. What I do find problematic is his misogyny. It pains me to say this due to nostalgia for this movie, but he’s a jerk and treats women poorly. I’m not going to hold this against the movie too much as it was a different time. I just have my issue there with Venkman. Aykroyd is great as this egghead along with Ramis. They all play well off each other so well. I like that both of them are needed for different aspects of the research. Weaver is solid as well. She has a bit more limited role, but is important to the final product. The same could be said for Moranis. Potts is fine along with Ernie Hudson as Winston Zeddemore. He has some good lines. I also thought that Atherton plays a jerk so well and the rest of the cast rounded this out for what was needed.

Where I’ll end this is with the effects, cinematography and the soundtrack. While watching this, Jaime commented how well done the effects were which I agreed. The ghosts look good and this is a time before CGI. There is a slight issue with the dogs in the movie with stop motion. It isn’t seamlessly overlaid, but I’m not going to hold that against it either. I think the cinematography is well done on top of that. The soundtrack is on point as well. They took a lot of care and I mean more than just the theme song which is iconic. The music throughout is great.

So then in conclusion here, this is a classic. I love the story and the care put into it. The care they put into the mythology makes it feel real. The believability to what they’re doing is solid and it is all grounded in a real feeling world. The acting is on point along with the effects, cinematography and the soundtrack. My only real issue is with the horrible things that Venkman says toward women, but I do need to look at this with 1980s eyes. Regardless, this movie is great. It is a lot of fun and a gateway horror movie for sure. That last part is what some people will contend with. I think with the subject matter and some of the darker things we get, it falls in that camp for me. This is a perfect storm movie that everything just seems to work.