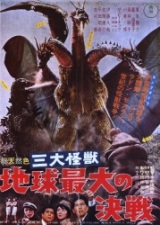 This film begins with a reporter documenting a UFO club; she is played by Yuriko Hoshi. They accuse her of not believing and the aliens have detected this. There is a bunch of shooting stars that are in the sky.

We then shift to her brother, played by Yôsuke Natsuki, who is a detective. His boss, played by Akihiko Hirata, informs him that he is to protect a princess from a small nation called Sergina. He gives Natsuki pictures of her, she is played by Akiko Wakabayashi, and they are awaiting her plane to arrive to collect her. Hirata informs him that there is a plot to assassinate her and they are trying to prevent it. We then see back in her country that someone else wants the throne and that they are going to kill her soon. They say that she will not be returning to the country.

We then shift to the airplane that she is on. There is a strange beam of light and then a voice speaks to her. It tells her to escape from the plane. As she does, the plane explodes.

A meteorite crashes into a valley beside a mountain. A professor, played by Hiroshi Koizumi is sent there to investigate it. He learns that due to strong winds, they will have to walk to it. The closer they get, they find it has a strong magnetic or gravitational pull on it.

Natsuki learns the plane has exploded and it is believed that the princess is dead. There is a talk of a prophet and Hoshi goes to cover the story. The prophet claims to be from Venus and that there is something bad is going to happen on a nearby mountain. Investigations begin into this, but nothing can be proved.

Hoshi is brought home by Koizumi and Natsuki watches her as she arrives. He asks her about the man who brought her home. They both live with their mother and they watch a television show together. Two boys want to meet Mothra, but that is not possible. Instead, the two fairies from the island, played by Emi Itô and Yumi Itô, come to the show and sing to Mothra. We learn that one of the ones from the last film has died, but the other is protecting the island. The larva is shown on television. Natsuki leaves the room to read the paper and realizes that the prophet is Wakabayashi.

The man who is trying to take her throne gets the same paper. He tells his chief assassin, played by Hisaya Itô to see if this is her and to kill her if it is.

Wakabaysashi goes to the mountain to try to convince them that something bad is going to happen, but no one believes her. They ask if it will erupt and she tells them no, that Rodan is going to emerge. Soon enough, the pterodactyl emerges and destroys things in the area.

Wakabayashi shows up the ship that is going to take the twin fairies back to their island, but she tells them that the ship will sink. The fairies believe her as they have similar abilities to her. Later that night, the ship is attacked by Godzilla.

Hoshi takes her to a hotel room. The twins show themselves and try to convince Hoshi to believe Wakabayashi. Natsuki also shows up to protect her. They are followed by the Assassin Itô along with three others. They are coming to confirm she is the princess and finish the job. The problem is that she doesn’t know she is the princess and believes she is a Venusian still.

To make matters worse, the meteorite continues to grow until King Ghidorah, the three-headed monster appears from it. Wakabayashi informs us that this monster destroyed Venus and it will do the same thing to Earth. She has come there to warn everyone. Japan tries to find a way to stop it, but how can they, especially with Rodan and Godzilla on the loose. It is then asked of the twin fairies to call on Mothra to get these other two to join together to save Earth.

Will Mothra do it? Can they be convinced to help before it is too late? Will Wakabayashi remember who she is or will Itô kill her? Can the assassins be stopped?

I do have to say that best thing about this film is getting Godzilla, Rodan, Mothra and King Ghidorah all into one film. This is the first appearance of King Ghidorah as well, who will become one of the prime villains against Earth. These both make this one an important contribution for the series of these films. This also marks the first time that Godzilla and Rodan are good monsters protecting Earth. The background story is okay and I do like how it all is tied together as well.

This film does have some issues for me. I felt that they took too much time on the background story and didn’t have enough interaction between the monsters. They might not have, because the fight scenes in this one are not very good. Godzilla and Rodan fight each other longer than it takes to defeat King Ghidorah. Plus there looked to be a dance off between them before Mothra shows up. Also Godzilla and Rodan accuse humanity of bullying them, which makes no sense since they are the ones that come to destroy cities. It felt a little childish too me. I also don’t understand why they constantly use Mothra as a larva instead of as a moth. I’m assuming for budget reasons, but it is a disappointment to me, unless they felt Mothra is too powerful as a moth and needs to have its power in check by showing it as a larva.

With that said, if you like the Godzilla/giant monster films, I would give this one viewing, especially for its importance in series. This one is not as good as previous ones where it comes to fighting between the monsters though. The background story is somewhat interesting and does well at tying things together. This one also does pull continuity from previous films which I liked. Not the best film in the series, but definitely is important.