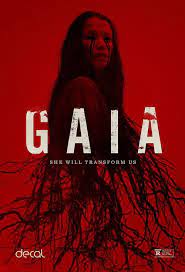 This is a movie that I wanted to see earlier this year. I know that it came to the Gateway Film Center, but for whatever reason I couldn’t make the show times work. It didn’t help that Jaime wasn’t that interested in seeing this. I decided then for my year end prep in December to give this a go. It helped that this movie was listed on the Rotten Tomatoes list of better reviewed horror films for 2021. The synopsis here is an injured forest ranger on a routine mission is saved by two off-the-grid survivalists. What is initially a welcome rescue grows more suspicious as the son and his renegade father reveal a cultish devotion to the forest.

For this movie we get a great overhead shot of a large forest. I didn’t know where this was taking place, but I looked it up while watching and it is South Africa. What I want to establish is the vastness of the forest and how easy you could get lost. We go down to a river where we have a canoe with Gabi (Monique Rockman) and Winston (Anthony Oseyemi). He is doing the rowing and makes a quip to her about helping out. She is controlling a drone. They run into an issue when the drone comes face to face with a person, covered in mud. She comes up with a plan to go retrieve it, but he doesn’t think it is smart. People go missing in these woods all of the time. As she is going to where she lost it, she triggers a trap that our man in mud set up. A spike goes through her boot and her foot. She is limping along, trying to find not only the drone, but help.

We then see that this man in mud isn’t alone. We will learn later his name is Barend (Carel Nel) and with him is his son, Stefan (Alex van Dyk). They are the survivalists from the synopsis and living off the land. As they go about their day, we see them collecting things. There is an interesting moment where they have to cover their faces as they walk through a cloud of something. It turns out to be spores from mushrooms. This and other fungus is a big part of their life.

Gabi cannot get in touch with Winston who is also searching for her. During her walk, she encountered someone in the woods that looked strange. Winston actually has a run in with this person, who is walking odd with a contorted body. She happens upon a cabin and seeks shelter. The cabin she ended up in belongs to Barend and Stefan. They help her out by putting a paste on her foot and wrapping it. Stefan doesn’t talk a lot and he’s not encountered too many people. Barend decided to live off the land when his wife passed away due to cancer. It seems that she decided to end her days out here and he joined her.

From here, she learns a bit more about the life that these two live. She wants to get back to civilization and they can help her. She is concerned for Stefan, who didn’t seem to have much of a choice about the life that he is living. Part of that fear is from these strange creatures that live in the woods. The truth behind them is even more terrifying as Winston is taken. Gabi has a decision to make. Give up her life in the city and live off the land, or try to escape with Stefan. Barend might have lost this mind due to grief and living isolated, but Gabi might be making things worse as his way of life is threatened.

That is where I’m going to leave my recap as there isn’t a lot to the basic story of the movie. This movie is much more about the depth of the characters and understanding their motivations. If you know me, that is my kind of movie. That’s not to say there aren’t issues that I have here, but I wanted to at least establish this before I went deeper into things.

Where I want to start would be the two characters we are following in the beginning. Gabi and Winston work for the park service. They are there collecting data with things like the drone and trail cameras. What I like is that we get introduced to one of these when Barend puts mud on the lens. Winston notices this when he collects the sim card. This first started to make me suspicious. What I like about this is that Barend wants to be left alone to live his life off the land. I can respect that for sure. When I start to break down him and his son, I have a bit more to say, but they want to be one with nature. It is interesting their interactions with these two rangers since they work with nature. If anyone, these are two people who understand it better than others. They still enjoy the life they have with civilization.

Since I keep referencing them, I’ll go into these two survivalists. Barend came out here with his wife as she was dying of cancer. He was a plant pathologist. It seems like the treatments she was having were toxic to the body and they decided to live off the land and make her more comfortable. Stefan didn’t have a choice in the matter. He was a boy when they came out here so he doesn’t know any better. I like that when Gabi shows up, she is taking a picture with him on her phone and almost seducing him to come with her back to the city. This frustrates Barend and I don’t blame him. She is disrupting their lives. What is interesting with all of this is the fact that she is technically the forbidden fruit. Stefan is living in ignorance until she comes. I did like this idea when presented.

Something else that I want to delve into is Barend’s beliefs. This movie embraces the idea that the Earth has been poisoned by humanity for so long that it has developed a way to fight back. There are these mushrooms here that attack humans. It starts with the mucus membranes of the eyes, nose and mouth. The last thing to go is the muscles and this idea is terrifying. Barend states in his manifesto he is writing that it started with the Industrial Revolution. War between nature and humanity started. Man is poisoning the Earth, so it is now fighting back with creating this fungus. He also makes a great reference about seeing primates in captivity as a great representation of humanity and I don’t disagree. I started to wonder if Barend was crazy or not before Gabi arrived. It makes me believe that he might be losing it or has lost it. When she challenges to change his way of living, he goes over the deep end for sure. It almost makes me wonder if he is really hearing this fungus in a tree talk to him, or has his mind gone so far he is making decisions and claiming it is his ‘god’ talking to him. We are dealing with the idea of a religious zealot.

I think that is about the extent of what I want to go into with the story so I’ll go over to the acting. What is interesting here is that we have a three person show for the most part. We have Rockman as Gabi. She does well in this role. I like that she cares about nature with her job. She can understand the plight of Barend and Stefan. She wants the best for this younger man, but the problem I have is that she is mettle with things she shouldn’t be. It is his decision, but we see a struggle between her and Barend without the younger man really deciding. Nel is good as this person that we don’t realize has lost his mind, but the more we see, the more it makes sense. His performance is probably the best for me. Van Dyk is also good as Stefan. Aside from that, I thought Oseyemi and those that play the mushroom people we see work well for what is needed.

Next then would be the effects, cinematography and soundtrack. For the former, we don’t get a lot of them. They go practical where they can for wounds and blood. I thought that looked good as it felt real. There is quite a bit of CGI. Mostly what they’re doing with it is for plants growing or moving faster than they should. I am forgiving here a bit. There are dream sequences, but we are dealing with mushrooms and fungus that tend to have hallucinogenic properties. There is also CGI with how the mushroom people move. It isn’t great, but it still works for me. The cinematography is well done in establishing this is going to be surreal. I thought that worked. The soundtrack is also great. It gives off such an eerie vibe for me and I dug it.

So then in conclusion here, I liked this movie. I think we have an interesting commentary here for what humanity does to nature and nature fighting back. There is even an interesting madness to Barend who thinks poorly of humanity. It is hard to disagree with him though. For what I like, this movie focuses on things at times that aren’t as interesting. It does slow the movie down if I’m honest. The acting is good though. I will give credit there. The effects work, even if the CGI doesn’t always look great. The cinematography looks great and the soundtrack adds to the atmosphere they needed for sure. Something else I haven’t brought up is the great setting deep in the woods. You get this lost feeling for sure. Overall, I would say this is a good movie. If some of my issues could be fixed, this could be higher. I am interested to rewatch this now that I’ve seen it for sure.