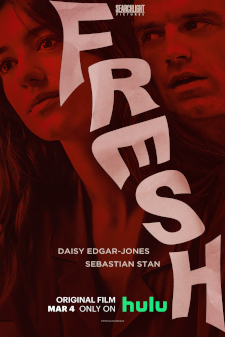 This is a movie that was being recommend through my Hulu subscription. It looked interesting, especially since I’m a fan of Sebastian Stan. I wasn’t sure what it was about though. When I heard podcasts recommending it as well, I put it on a list of movies to check out. I had a week where the theater I go to didn’t have a 2022 release, so I decided to watch this as a featured review for Journey with a Cinephile: A Horror Movie Podcast. The synopsis for this movie is the horrors of modern dating seen through one young woman’s defiant battle to survive her new boyfriend’s unusual appetites.

We start this with Noa (Daisy Edgar-Jones) psyching herself up to go in for a date. She is talking on the phone with her friend Mollie (Jojo T. Gibbs). There are red flags from some things that the date relayed to Noa, but she is taking a gamble anyways. Her date is named Chad (Brett Dier) and she should have listened to her gut. The date is a nightmare. We get an interesting look at toxic masculinity by the end of it.

Noa is debating giving up on the dating scene when she goes to her local supermarket. It is there she encounters Steve (Stan) in the produce section. They have an odd interaction, but it is also endearing. He ends up with Noa’s number before leaving. Even though she didn’t get to learn too much about him, Noa is hoping he will text her. When he does, the two have a great date that ends up with him staying at her place. Both are quirky, but they’re compliments of each other.

Steve then pitches the idea of going away for the weekend. Mollie thinks it is a red flag, but Noa once again ignores it. They go anyway. Their plan is to Cottage Grove. Steve is a reconstructive surgeon and couldn’t get away from work. Noa agrees to stay at his place and then hit the road the next morning. Things take a dark turn from there though and it becomes a nightmare for Noa as well as a fight for survival.

What I find interesting for this movie is that this is the cold open. It runs about thirty minutes before we got the title screen and credits. It is also from there that the movie takes the turn into the horror realm. It is interesting that I heard podcasters talk about it, so I knew that coming in and to stick with it. What I will say though, I didn’t have any issues with the opening. I found it interesting and some of what we get matches what I’ve heard from people in the dating scene, including myself.

That is where I want to start with my breakdown of the movie. It will also take me into the social commentary. Now don’t take that as a bad thing. It isn’t in your face, but we are seeing the horrors of the modern dating world. We get part of that in the being with the bad date that Noa goes on. I’ve been on some bad dates with people that I’ve met on dating apps. We are seeing in this movie from the woman’s point of view. Chad is showing toxic masculinity. He doesn’t have the wherewithal that it’s not going well. He also doesn’t realize how rude he is being. There is nothing wrong there to be honest. My problem comes from when Noa rejects him. I don’t believe anything he says there outside of showing his true colors. It doesn’t shock me that Noa would get sucked in like she does with Steve. He’s charismatic and treats her well. The problem is that there are ulterior motives, which goes back to being toxic. I think it does well in conveying this.

I wanted to flesh out this last idea as well. Noa ignored red flags with Chad and still went on the date. I can’t fault her there as she is looking for a connection and didn’t want to judge a book without going it a full shot. She ignores even more with Steve. I think this is also showing the dangers of dating as woman when she leaves that first date. There is a guy following her in a dark alley and we see the steps that Noa takes to protect herself. She does drop her keys when she’s close to the car, but it is sad that she must do this. There’s another aspect of this that Noa blames herself. She meets another woman, Penny (Andrea Bang), who points out that it is not her fault. She’s right. There is a commentary on protecting yourself, but ultimately, when bad things happen it is the person who did its fault. Not the victim’s fault. We’ve been getting a lot of movies like this lately, but I think this one conveys it much better than others.

The other parts of the story that I want to go into will be covered in a brief spoiler section in the end. Where I’ll go then here is the acting. I think that are two leads are great. Edgar-Jones is a character that I feel bad for. Having done the dating scene, I get it. It isn’t fun. I do think that how she plays Noa feels real and quite natural. Going along with this, Stan is great counterpart for her. He brings such a charismatic take on his character and it works so well. There’s also a level of toxic masculinity that comes out as the movie goes on. Other than that, I thought Gibbs was good as Noa’s best friend. She can see the red flags that her friend is ignoring. Other than that, I thought that Bang, Dayo Okeniyi, Charlotte Le Bon, Dier and the rest of the cast rounded this out for what was needed in pushing our two leads to where they end up.

Other than that, I think the last things to go into would be the cinematography, effects and the soundtrack. For the former, I think this movie is shot beautifully. It is great to be honest. There are sequences and different shots that were done amazing. I like the change of focus when a character gets drugged. That adds an element to put us in the character’s shoes. It also has an arthouse feel at times while still being a movie that anyone can watch. There are some great montage sequences to convey different things. I’d even say that the soundtrack fit well here. It enhanced the feel of the scenes in a way that worked. Then finally would be the effects. They looked to be practical and I thought they fit. It looks real and even in a way is disgusting at times. I can appreciate that.

In conclusion, I rather enjoyed this movie. We are getting a concept that many of us can connect with in the beginning and it takes a dark turn into the horror realm after the cold open. It is something that is terrifying and could happen. There is something scarier to me about real life horror. The acting is solid. I like the portrayal and range of emotions we get from Edgar-Jones. On the other side, we have Stan who is charismatic and can charm her into things that happen. The effects were solid. I think the cinematography is great and what they do with the shots is on point. The soundtrack fit for what was needed in enhancing the scenes. I would say after this first viewing, this movie is a good one, just missing out on great. I do have plans on revisiting before doing my year end list.

The reveal in this movie is that Steve is kidnapping women and selling their meat. It is a lucrative business. There is an interesting balance here where Steve doesn’t want the meat to spoil, so he must keep them alive. He walks a tightrope to punish them, because fear can sour the meat and he doesn’t want that. It is fitting that Steve has the personality he does, because not only can he lure them in, but he also disarms them with it.

It is here that we get an interesting dynamic. Noa blames herself for getting into this situation. There were red flags that she missed. Penny points out though that isn’t her fault. It is Steve’s fault. I like that Noa finds strength within herself and uses the fact that Steve likes her. She is using her femininity as a weapon. That is something that worked for me and allows her take back the power.

Going along with this idea, Steve thinks that Noa still is in love with him. This would be while she is captured. He would think that because he is sociopath and is also arrogant. What I like is that we’re exploring the idea of Stockholm syndrome. Steve is married to Ann (Le Bon). There is a reveal that she is missing half of one of her legs below the knee. I’m taking that this means she was a victim that he previously loved and allowed to leave. He then started a family with her. It seems like he is trying to replace her with Noa, who he also feels more for. I liked how this play out.

Now the last thing I wanted to go back to the idea of Steve selling meat. It makes him a lot of money and we see how he lives. He tells Noa that it is the 1% of the 1% who are the buyers he works with. This seems like a commentary on the depravity of those people that can afford it. They’re so rich that they need to find things that no one else has or can do. It almost feels in the vein of Hostel, where once the normal pleasures no longer do anything for you so you need to go the next thing. It is wild. This does feel like it is boring from the conspiracy theory about rich elites. I could see this happening and not just the political weapon that some use it as. I would also say there’s a commentary here on eating meat. It makes it not look appetizing at times if I’m honest.