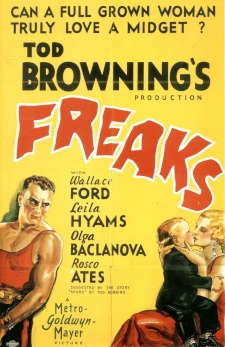 This is a movie that I feel like I heard about before getting into podcasts. I know I read about it in the Fangoria Top 300 Horror Movies issue as well as it appears in The Horror Show Guide encyclopedia, both of which is what I compiled my first list of horror movies to see to expand my horizons. I’m now getting around to this as part of my Trek through the Twos. The synopsis is a circus’ beautiful trapeze artist agrees to marry the leader of side-show performers, but his deformed friends discover she is only marrying him for his inheritance.

For this movie, we start with a text from director Tod Browning to prepare the audience for what they’re going to see. A brief recap of that is people who are born different have been treated poorly their whole lives and throughout history. This movie is not here to exploit them, but to honor them. I also didn’t realize this was suggested by the story Spurs by Clarence Aaron ‘Tod’ Robbins.

We then shift to a freakshow barker, which was an uncredited role played by Murry Kinnell. He is setting the stage and telling the story of one of the attractions. The movie then shifts into the past at a different circus. We have Hans (Harry Earles) and Frieda (Daisy Earles). Both are little people and from my brief research, they’re brother and sister. They are playing a couple here that is engaged to be married. Hans has eyes for the beautiful trapeze artist who goes by Cleopatra (Olga Baclanova). She flirts with Hans and I think part of this to make Frieda jealous. She also knows she can control men with her beauty.

From here we get to meet other members of this circus which involves a clown, Phroso (Wallace Ford). There is Venus (Leila Hyams) who helps with the animals and she is dating Hercules (Henry Victor), who is the strong man. The two of them get into a fight and she leaves Hercules. She ends up giving Phroso a piece of her mind, mostly because he is there while she is fuming. The two of them start to date. I do like that Phroso seems like a good guy from his interactions with others in this circus.

Cleopatra sees Hercules and invites him into her wagon. They hit it off as they’re both horrible people. Cleopatra also invited Hans back to her wagon. She sends him away, but he starts to send her gifts. She takes advantage of this, breaking off his engagement with Frieda. She along with others in this circus try to warn him, but Hans is smitten with this woman that he didn’t think he could date. Cleopatra sees a bigger opportunity when she learns of how he is paying for these gifts. It could mean her retiring from the circus for good.

That is where I’m going to leave my recap. I don’t want to go into spoilers even though this movie is now 90+ years old. There isn’t a lot to the story and I do think most horror fans know about this movie. If they haven’t seen it, they at least know the iconic line and chanting of ‘One of Us’.

Where I want to start is with a bit of backstory about this movie. From what I read, Browning worked in a circus growing up as a contortionist and a clown. He was familiar with these people due to being around similar ones that worked in the freakshow. It is wild to me that we had people who were different and this was some of the only work they could do. This is something that makes me ashamed to be a human being. I’m glad that we’ve come away from this. I do know many of these people were proud and they should be. It is sad that this movie ruined the career of Browning as I think it is good what he is portraying here. These people just have different genetics and it is sad that we treated them less than human for it.

What I mean there is that this movie has interesting social commentary here. It is done in a subtle enough way that I can appreciate as well. The common idea that many thought when this was being made or they considered taking was having all the ‘normal’ people being the horrible with all the ‘freaks’ being good. I’m glad they didn’t do that. Instead, we have Phroso who treats everyone with respect and he’s well liked. Venus is also nice to all she meets. Cleopatra, Hercules and most of the other staff with the circus laugh at the less fortunate. There are more doing this, but I think this is in line with humanity. I understand this is a bleak outlook and I could be wrong. From what I’ve seen in my life, this is on par.

The last bit for the story that I wanted to delve into is going back to this movie being considered by audiences of the days it was released thinking that Browning was exploiting the people of the freakshow. I don’t get that. It feels more to be that he is highlighting them and giving them screentime. I guess in a way this is no better than the freakshow itself though. We get to see the Living Torso, Prince Randian, lighting up a cigarette. There is meeting our conjoined twins of Daisy and Violet Hilton. There seems to almost be a psychic connection between them. There are also others like Schlitze, Elvira Snow and Jenny Lee Snow who have microcephalism. There are also people like the Half Woman-Half Man, which I’m assuming is someone who was transgendered or a similar concept. There is also the half boy, armless girl, human skeleton and a bearded lady to name a few.

Where I will then go would be the acting. First, I will give credit to all the members of the freakshow. I thought they did a solid job. They are mostly playing themselves, but I give them credit regardless. I love Ford in this movie. He is great as this clown that has big ideas, but he just seems like a great all-around guy. Hyams is someone else I’d put right there with him. I think that Baclanova and Victor were both solid as our villains. I’d say the rest of the ‘normal’ people in the circus are also good to symbolize the audience or how people seem to judge those that are different. I think it fits.

Then the last things to go into would be the cinematography, effects and the soundtrack. For the former, I think that is fine. We are early in cinema so we aren’t getting a lot that is different. I do think that the shots are framed well. It does feel like we are following people who are part of a circus. I like the sets being inside of their wagons which double as apartments. That all worked for me. There aren’t a lot in the way of effects, especially since most everything we see are real people with these afflictions. I did like the reveal of what happened to Cleopatra. I can’t fully get behind it, but it is as Browning warns in the beginning, if you hurt one of the members of the freakshow, you hurt them all. The last bit would be the soundtrack which fit this movie for what was needed.

In conclusion here, this is one that I’m glad I can finally say I’ve seen. I think that the story is basic, but it is interesting. I like that we get to know these characters and almost giving many of them screen time to showcase their talents. The acting was good across the board. There is an interesting commentary here that I think is done subtle and is still relevant. The cinematography, effects and soundtrack are all fine as well. I can also see why this is regarded as a classic. It is horrific in a traditional movie sense, but there is a feeling of dread that grows for sure. I’d say that my rating of this movie is it being a good one. I would be curious where my rating falls with a second viewing.