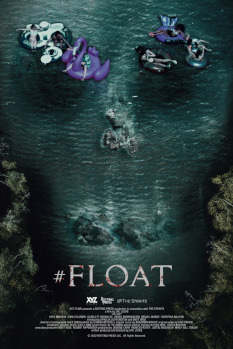 This was the last feature that was showing on the opening day of Nightmares Film Festival. I did read up a bit while at work ahead of the festival starting so I knew a little coming in. The extent was reading the synopsis as well as seeing if I recognized any of the names of the actors. This was also the World Premiere.

Synopsis: when a vlogger and her crew embark on their annual river float to commemorate the untimely loss of their friend, they are plunged into a life and death battle with a mysterious local, a sinister paranormal force and their own fears.

Expanding out the synopsis a bit more is where I want to start. These friends come here every year as they float down this river. Their friend passed away here the previous time so they want to honor him as it says and spread his ashes. The friends that are here are Madison (Scarlett Sperduto), Dee (Kaya Coleman), Blake (Grant Morningstar), Kali Fyre (Kate Mayhew), Zola (Christina Nguyen) and Jackson (Miguel Muñoz).

Kali is a vlogger that is in the synopsis. She lives her ‘persona’ online and her boyfriend Jackson doesn’t care for it. This builds tension between them. Her best friend is Dee who has a crush on Blake. To complicate things, he is there with his ex-girlfriend of Zola as well as their daughter Thea (Ophelia Lichtenstein).

This crew parties it up that first night. Things take a creepy turn when a strange local man shows up and warns them to not float down the river. He is played by Matt Wise. They ignore him and go back to doing what they were. They have more run-ins with him before getting on the river. What happens from there tears them apart. Blake and Thea disappear. Zola thinks she saw something supernatural kill him. Madison doesn’t want to stay on the water while Kali and Jackson bicker. It becomes a fight for survival and try to understand what is happening here.

That should be enough of a recap to give you a bit more of what we are getting here without spoiling. It also explains the dynamic that we are working with. Now I where I want to start is with the Q and A after the movie ended. Writer/director Zac Locke was there with Sperduto and Mayhew. What I found interesting is that the latter was found from what she said as an unsuccessful social media account. She was doing a bit of vlogging and Locke thought she would be good in this role. That was funny as well as interesting that they used real videos to incorporate into this.

Now with that out of the way, I think this has an interesting set up. I’ve gone tubbing where we just float down the river like this. The title is interesting to incorporate the hashtag since that is in line with Kali. Having them go down the river like they are builds horror. You tend to be away from areas where you can’t get service. If you don’t secure things like your phone or keys, if you tip over there is a good chance you will lose them. I like that this incorporates these elements as that is grounded fear.

Then to go from there, I want to shift over to discussing the characters. I’ll say that the performances are good across the board. Everyone feels like these characters they are portraying. It also feels like they’ve been friends for a long time. What I found interesting is that the party footage just had them go to a spot, turn the camera on and just record what happens. It sounds like it wasn’t scripted which helps with the realism. The performances I want to give credit to are Wise and Lichtenstein. For the former, he does great as this creepy local. He wants to help and protect this group, but there does seem to be a bit more behind it when we see what he does. Then for Lichtenstein, I think it is interesting to have a child in this like we do. You don’t expect it and it does raise tensions. The only issue there is that I never felt she was truly in peril. The acting was good for what they needed.

Back to the story. The last thing that I want to go into are the supernatural elements. I do think this is where we get a misstep. There is this supernatural force, but it doesn’t feel defined enough. It almost had a Lovecraftian vibe where there could be a monster in the water. Then there are times that I thought it could be more than that since it can manifest things. It feels like they don’t fully know it is or its abilities and they kept it mysterious. I just needed a bit more there. The only other issue is that I don’t like the characters. It isn’t the performances. If anything, I give them credit for getting a reaction out of me. They are just self-absorbed. I know it isn’t fair as I see college me in them. I acknowledge it is due to me being in my mid-thirties while writing this.

The last things to go into would be with the filmmaking. I thought that the cinematography was good. I like the stuff on the river. That felt real. Other than that, it doesn’t necessarily stand out. That’s not a negative by any stretch. We don’t get a lot in the way of effects. What we did looked to be done practical. If not, it would be solid CGI so I’ll give credit either way. The soundtrack fit for what was needed. It didn’t necessarily stand out or hurt the movie. If I do have a negative, I did lose interest as I feel the pacing is off slightly. This goes back to me not feeling they fully know what the entity is in my opinion.

In conclusion, I still enjoyed this overall. We have a cast of characters that I don’t fully like, but they feel real. There seems to be a good set-up, I just don’t know if they fleshed out enough for the entity. This is a well-made movie though. I will give credit to that. The only negative is that I think this gets a bit boring as it seems to lose its way for a bit. Not enough to ruin it though as I’m sucked in trying to figure things out. I enjoyed the ride well enough for what it took me.