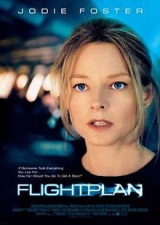 In this film, we have a grieving woman, played by Jodie Foster. Her husband has fallen from a roof and it isn’t known whether it was an accident or a suicide. Foster and her daughter are going to fly to New York for the funeral with the coffin in the plane underneath them.

The daughter is taking it hard herself and wants to stay hidden, so Foster puts her in her coat at the beginning. They are the first two on the plane that is a double-decker one. It is something of note, that Foster designed the engines for the plane, so she has knowledge of the blueprint.

On the plane, her daughter fogs up part of the window to draw a heart as she watches the coffin of her father go underneath the plane. The flight isn’t full so after take-off, Foster asks her if she wants to move a couple rows back to stretch out.

Foster awakens to find her daughter is missing. She asks a couple of the stewardesses on the flight if they’ve seen her to which they haven’t. She asks a couple of passengers who have not either. She begins to freak and goes for the cockpit. A US flight marshal stops her, played by Peter Sarsgaard. The pilot is talked to and comes out, played by Sean Bean, and a search of the plane for the girl begins. It doesn’t net anything and Foster is forced by to her seat after a stewardess informs everyone, the morgue where her husband was at is also where her daughter was too.

Close to her window she breathes on it, revealing the heart her daughter drew. Was she ever on the plane? Did she die in Berlin? Is she still alive?

This film builds suspense well because of the setting. We see the daughter at home, in the airport and actually on the plane, but when Foster awakens she is gone. Being on a closed in airplane gives a claustrophobic-feel that if she was on the plane, she should be found quickly and when she isn’t, we question if Foster is in too emotional of a state.

The film does drag on a bit though, because there is only so much they can do being cramped on an airplane, so what makes this film great, also limits it as well.

With that being said, I would recommend giving this film a view. The acting is great, the story is solid and the atmosphere heals to heighten the mystery. Not the greatest in the genre, but still worth your time. This is also being added to the horror film research due to being a psychology thriller as well as being a film where a mother is trying to prove she is not crazy and that her daughter is alive.