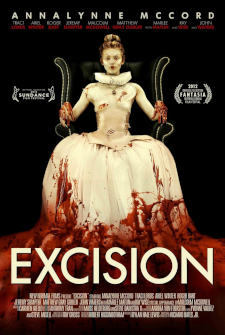 For this movie, I believe I heard about it when working at Family Video. I’m not entirely sure that I knew this was a horror movie, but I feel like we got a copy or two in of it. I didn’t see it though. It did go on a list of movies to check out from podcast recommendations though. I am now watching it as part of the Summer Series for the Podcast Under the Stairs.

Synopsis: a disturbed and delusional high school student with aspirations of a career in medicine goes to extremes to earn the approval of her controlling mother.

So, we get this odd scene to start us off. We are seeing two versions of Pauline (AnnaLynne McCord). One of them is bleeding while it appears the other is orgasmic with what she is seeing. It turns out to be a dream. Pauline will have a series of these as the movie goes on that look like perverted medical experiments, procedures and blood. It turns her on.

Pauline goes to breakfast with her family. Her mother is Phyllis (Traci Lords) and much like the synopsis said, she is controlling. Bob (Roger Bart) is her dad and he is timid. He looks beaten down and I’m sure that is thanks to Phyllis. There is also the favorite child by the mother, Grace (Ariel Winter). She has cystic fibrosis and things aren’t looking great there. Phyllis is hard on Pauline, but she doesn’t help the situation and pushes her buttons.

To give a bit more background here, Pauline wants to be a surgeon. It appears that she is bright and can retain information, but she also seems like a sociopath. We see her bump heads with her teacher of Mr. Cooper (Malcolm McDowell). She isn’t doing her work in this class as she doesn’t feel it will help her get into the medical profession. She also just an average student. Pauline is also quite awkward. This causes her classmates to mock her.

Pauline knows what she wants though. She makes an offer to Natalie’s (Molly McCook) boyfriend of Adam (Jeremy Sumpter) that she wants to lose her virginity to him. She shares with her sister that she wants to do this while on her period. This act causes a snowball of events that end with her being expelled from school and putting her even worse standing with her mother as she acts out. A turn with Grace also causes Pauline to take matters into her own hands.

That is where I want to leave my recap for this movie. Now I did know coming in that this movie was graphic in its own way. I wasn’t expecting necessarily what we got and I think that helped me to enjoy this. This movie is written and directed by Richard Bates Jr., which I’ve seen one of his other films in Tone-Deaf. I did enjoy it and I will say, this guy has a quirky way of doing things and that is here for sure.

Where I think I should start is the character of Pauline. McCord is attractive; let’s get that out of the way. I’ve seen her before this in things like Officer Down and the Day of the Dead remake. What I like here though is that she isn’t wearing make-up. They’ve done played this as well by having her skin look rough with acne. I think this is genius to be honest. Her performance as this quirky teen that has sociopathic tendencies is on point. We get things like her praying to God and talking to him like she would anyone else. It is hilarious to be honest. I also enjoy her retention of facts from things that she learns if she deems them important. Her mother is concerned with her being normal, but she isn’t. She is also delusional as well. I was quite impressed with McCord’s performance here.

Her family is where I’ll go next. Phyllis is interesting as she does want what is best for her family. They don’t have a lot of money so instead of sending Pauline to a psychiatrist, she sends her to Father William (John Waters). Being that Pauline doesn’t buy into faith and won’t recognize him as being able to help her, she ignores it. It goes back to her being a sociopath. Phyllis puts everything into having the perfect façade so anything that Pauline does to break that bothers her. Bob just looks like he has been beaten down by his wife and has given up. Grace is the perfect daughter that Phyllis wants, but she is damaged physically with her condition. It is sad though. I’d say that Bart, Winter and Lords are all great in their roles to be honest.

Where I want to go next are the effects. This movie is weird if I didn’t convey that enough. We have these dreams that are surreal and look great. The blood looks amazing when we get to see it. I also like how they went practical with all of this and it made me cringe at times. Pauline is so matter of fact about things that it makes it unnerving. When she says something, you must question if she is serious. How far this movie goes with things is great as well. I’d also like to commend the cinematography here. Both of these aspects were on point.

Since I’ve covered the acting of the family, I’ll go briefly to the rest of the cast. We have some heavy hitters here in minor roles like Waters, McDowell, Marlee Matlin, and Ray Wise to name a few. They all do good. I think that Sumpter, Matthew Fahey, Sidney Franklin, McCook, Natalie Dreyfuss and Cole Bernstein all feel like ‘normal’ teens as well. With how quirky this family we are following is, they don’t need to do much to offset it and it works for me.

So then in conclusion here, I’m glad that I finally saw this movie. It wasn’t necessarily what I was expecting, but I’m not entirely sure what I was. This movie has an odd tone that worked for me. It is led by a great performance by McCord with a cast around her that shapes and pushes her character to where she needs to go. We have a surreal film with good cinematography to highlight that and the effects to help as well. I like what they do with the soundtrack. It gives an eerie vibe when needed and the rest just fit the scenes as well. For me, this is a good movie and one that I’ll definitely revisit.