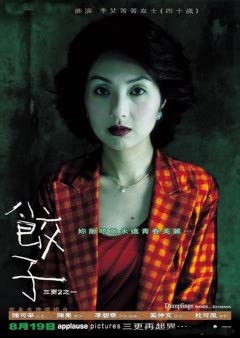 This was a movie that I never heard about until horror movie podcasts. I knew this was part of the anthology film of Three… Extremes and that they decided to flesh this out more for this movie here. I also had an idea of what was happening here, just not sure how it would fully play out.

Synopsis: Aunt Mei’s (Bai Ling) famous homemade dumplings provide amazing age-defying qualities popular with middle-aged women. But her latest customer – a fading actress – is determined to find out what the secret ingredient is.

For this movie, we start off seeing Mei as she is in an airport. She is returning home and has a lunch box that is normal for the area. What I will say is that she’s wearing loud clothing. No one stops here though. She goes home where we see her reveal something that is quite horrific from the cover of her lunch box. She eats one of the items as well.

We then follow Mrs. Li (Miriam Chin Wah Yeung). What I caught on to is that she is hiding herself from the residents of this apartment complex. She knocks on the door of Mei’s and is allowed in. Mei makes dumplings from a secret ingredient that will make people younger when they eat them. Mrs. Li was turned on to her from someone and is intrigued to see if it will work. She seems to know what the secret ingredient is and at first, she struggles to eat the dumplings. She forces them down.

The reason that Mrs. Li wants to be younger is that her husband of Mr. Li (Tony Ka Fei Leung) no longer pays her attention. We see he comes on to his masseuse, Pauline Lau. She is staving off his advances, but they end up having an affair.

Mei is much older than she looks. She doesn’t reveal her age until much later, but she is in her 60’s. She is using the secret ingredient to stay young herself. She was a doctor in China before coming to Hong Kong. This knowledge brings Kate (Miki Yeung), a teen who is pregnant due to be molested by her father. Her mother, So-Foon Wong, brings her there, but Mei refuses to help. She does learn that if she helps, it will provide the perfect ingredient to help Mrs. Li. There are side-effects to this and Mr. Li also learns of his wife’s secret.

That’s where I want to leave the recap of this movie as I feel that gets you up to speed. There is really some interesting social commentary here that I did enjoy. Where I want to start there would be the character of Mrs. Li. I know in these Asian countries, who you marry is very important. She was a young actress that married a more powerful and rich man in Mr. Li. We see the concept playing out here that women as they age become less attractive. This was a concept that was pushed forth with The Leech Woman that I recently watched as well. She is doing everything that she can to get her husband to notice her again, even though she’s quite attractive even when she’s supposed to look older. Even Mei points that out.

That will take me to Mr. Li, who I don’t really like. He’s having an affair and it feels like he can do whatever he wants. I don’t think he has any interest in leaving his wife, even for this younger masseuse. He is just there to do whatever he wants. Despite being much older, he is aging more gracefully. That is the other idea that is pushed forth in that older movie I watched as well. He can still get someone like this much younger woman despite all this.

Now I’m going to give a bit of a spoiler here, the secret ingredient is aborted fetuses. What is interesting here is that stem cells and the research that comes from it have seen that there could be healing properties. That makes this intriguing. This movie seems to be social commentary on this practice and also falls in line with some conspiracy theorist fears. The hospital is performing a bunch of abortions a day and then selling the fetuses. Do I think this could be happening in real life? Probably, but not on the scale we’re seeing here. I do feel that this movie is showing us that it is a bad practice and it makes these people monsters by engaging in cannibalism. I will state that I’m pro-choice, but not necessarily pro-abortion. This did make me cringe a few times.

I’ll shift this over to the acting here next since I’ve been breaking down the characters. I think that Yeung is solid as our lead here. I feel bad for her, but she slowly becomes a monster as she needs to be younger. It is the ‘forbidden fruit’ idea. Once you have a taste, you don’t want to go back. I think that Ling is good as this quirky Aunt Mei. I love how she plays it as she is a bit out of touch with reality and it makes her odd. She conveys this very well. Leung is a scumbag across the board. I’ll give the character credit for getting a reaction out of me. I do like Lau, Wong and Yeung as well in their roles to help round this out.

Then I will go to the effects of the movie. They seemed to do most everything that I could tell practically. If there was any CGI, I didn’t notice it. What is more impactful here though would be the framing of things. It made me cringe so that worked. We don’t see a lot of things and that works to its advantage in letting my imagination run with a bit of it. The blood we do get looked good and there’s one scene where it really made me cringe there as well.

I want to take this to the sound design here. The soundtrack really didn’t stand out to me, but it also didn’t hurt the movie either. It fit for what was needed. What I will say here is that sound effects worked well. They use ones to make me cringe when it comes to preparing the dumplings and disgusting sounds while they are eating them as well. This was quite effective if I’m being honest.

My real big issue with this film is that it is too long. This is weird to say since it only runs 90 minutes. It does feel like a short that has been stretched out to get to the full running time. There’s a lot of filler in it that I don’t need it and it had me bored at times. I think that this would have been more effective if we clocked in around 70 minutes or so at the most.

So now with that said, this is still an interesting movie that is exploring some topics that are in the news now and the commentary that comes with it. The leads are fleshed out in a way that works for me and their performances work. Thinking about what their doing is horrifying and that worked for me. The effects and the sound design for the movie worked in my opinion. The real issue is that it is too long and I don’t think what was added to stretch this out didn’t add enough to keep me invested the whole time. I would rate this as an above average movie still. I will warn you; it is from Hong Kong so I watched it in its native language with subtitles on. If that is an issue, I would avoid this one.