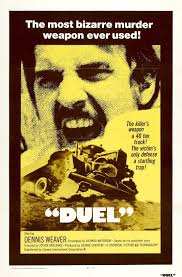 This was a film that I remember hearing about growing up, but never actually saw it. I’m not even entirely sure how I got turned on to it if I’m honest. I just knew that Steven Spielberg directed this and it would have been after I seen the likes of Jurassic Park. I actually finally gave this a viewing as I needed a TV movie for a horror movie challenge I’m doing. The synopsis is a business commuter is pursued and terrorized by the malevolent driver of a massive tractor-trailer.

We actually start this with a POV shot from the front of a car. This starts in the driveway of a house and follows them as they head out of the city. From the signs I got that we are in California. They get on to the highway and we see that it is a pretty nice car. They’re listening to different things on the radio as the stations come and go. This driver is David Mann (Dennis Weaver). He comes up on an old, giant tanker. The back of it states whatever it is carrying is flammable. David passes this truck and doesn’t think anything of it. It then passes him back, but then slows down. This annoys David so he again passes and puts a bit of distance between them.

He pulls into a gas station where the attendant is Tim Herbert. David gets the tank filled up and the attendant checks under the hood. The massive truck pulls up next to him and this makes David uneasy. The driver gets out, but we only see his boots. We also see him arm inside the cab before that. David goes inside to call his wife, Mrs. Mann (Jacqueline Scott). It seems they get into a fight the night prior over something when they were out. He is calling to apologize and wants to talk about it. This gets heated between them before hanging up.

The two vehicles get back on the road and we get more of the same where the massive truck won’t let David around and it becomes physical as well. This causes David to lose it and he crashes into a fence outside of a café. He goes inside to calm down, but when he looks out, the truck is parked there too. There are a few people that are wearing boots and could be the driver. David decides to confront one of them and it ends in an altercation. He just wants to make it to the appointment he has, but this has become a fight for his sanity and survival.

Now I decided to go a bit briefer with my recap, because to be honest there isn’t a lot to the story. That doesn’t mean this isn’t good though. What really makes this scary is that I’ve been in a situation similar to this where you pass someone and then you notice this upset the other driver. It is even creepier here though as we never really see who the driver is and why they’re doing what they are.

I’ve heard some podcasts on this movie and one thing that was brought up was how scary the truck itself is. It is funny that this came out in 1971 and the truck looks even old for that time period. It is massive, it definitely is a gas guzzler and the guy driving it really does know how to wield it as a weapon. Going even farther though, a lot of this is psychological. When David tries to tell others, there’s no proof really of what he’s claiming and he is so unnerved they think he could be crazy. I have to hand it to Spielberg there. It also doesn’t hurt that it was written by the horror great Richard Matheson.

Shifting to the pacing, I do think that this is where I have a slight issue. This is kind of repetitive as there’s not a lot they can really do different. In the first 20 minutes we are seeing the initial scene that upsets the truck driver and then after the scene at the gas station we get the tenser version of that. I don’t want to say that I was bored, because this does build tension. It’s just there are some limited things here that can be done. I did like the ending and the lengths that David is pushed to put an end to this.

As for the acting, there’s not a lot to say here. I did think that Weaver did a really good job. He kind of has a bit of arrogance to him in the beginning, but then we see this event really just breaks him. We get some internal monologue as he tries to figure out what is going on and what to do. I do think there are some decisions made that are only here to progress the story, but if I was in a stressful situation like this, I might do things similar. His performance was really good. I guess the other character is the truck itself, which looks creepy and was used to perfection there. The rest of the cast really just round out the film for what was needed.

Something else there aren’t a lot in the way of effects. It also doesn’t need a lot as it isn’t that type of film. I know I said this in the acting, but the look of the truck is great. They definitely went practical with the vehicles colliding. Part of this is that it was made for TV in the 1970’s, but regardless, it looks real. The film is actually shot in such interesting ways. We get a lot of cameras mounted outside of vehicles for interesting perspectives which I did really enjoy as well.

Now with that said, I’m glad that I finally got around to checking this movie out. It really has an interesting and scary premise, because this could really happen. I will admit though that it does get a bit repetitive, but that comes with the territory of what we’re seeing. I did like how it ended. Seeing David driven mad by this faceless truck and its driver was good. Weaver did a solid job and the rest of the cast rounded out the film for what was needed. There’s not a lot in the way of effects, but the look of the truck is great and Spielberg chose some really interesting ways to shoot this. The soundtrack for the most part didn’t stand out, but it definitely helped elevate the climax. I found this to be an above average film and you can see the beginnings of what Spielberg would become. I would actually recommend this to horror and non-horror fans alike.