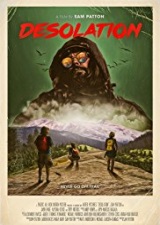 This film starts with a trio of people at a lake. There’s a woman in it, Jaimi Paige. As she exits the water, Alyshia Ochse takes a picture of her with a Polaroid camera. Ochse then gets in the water. There is a boy with them, Toby Nichols. His mother is Paige. Nichols walks along a path and notices a man in the distance, Claude Duhamel. Nichols waves, but gets no response back. Nichols is called over and when he looks back, Duhamel is gone.

The three climb to the top of a nearby mountain and find a geocache box. Inside they find things that other people have left. From it, Ochse takes a baggie with a joint of marijuana and lighter. A book of Sudoku is also taken and given to Nichols. They leave a bottle of beer inside of it.

They set up camp and Nichols gets whiney. He is 13 years old and wants to use Ochse’s emergency phone to look up how to do one of the puzzles. He is denied and Ochse ends up giving him some chocolate. When he goes to bed, the two women stay up drinking wine. It is then revealed that Paige’s husband and the father of Nichols passed away after getting sick. She needs to return to work soon and she doesn’t feel she is ready for that. They end up smoking the joint and going to where they stored their food. They find it and notice that nearby is a pack that wasn’t there earlier. This spooks them and they go back to camp. In the middle of the night, Paige gets up to urinate and we see Duhamel watching her. She doesn’t notice him.

The next morning they are packing their things to leave. Nichols is asked to put out the fire and he uses their drinking water to do so. He is scolded and didn’t realize it was a big deal. They start on the trail and see Duhamel. This spooks them and Nichols states he saw him yesterday. He doesn’t see the issue, but the two women are nervous. Duhamel follows them and they hide behind a tree. He smirks and then continues on. They think they’ve lost him.

This night they set up camp, but don’t make a fire. In the middle of the night, Paige hears music and it wakes her up. She goes to check on Ochse, but she is gone. We get images of what is Duhamel’s campsite. He is doing something with a knife. The next morning, Ochse is still gone. Paige states they need to continue on, but Nichols doesn’t want to leave Ochse. Paige tells him they need to find help and that she would want them to do that.

Nichols pushes back against Paige, stating that she doesn’t tell him anything or ask him what he thinks about any of this. Paige decides they’ll go off trail to get to a campground for help. Duhamel continues to follow them and night is starting to come.

Will they survive the night? Can they find help? Is Ochse okay? Why is Duhamel following them?

This film I had heard about as it was coming to streaming soon. A local theater around that time also was showing it, so I decided to check it out. I have to say that I really like some of the concepts of the film. We have a woman who is trying to overcome the grief of losing her husband. She shelters her son, who is getting older, growing up and this film becomes a coming of age for him. He becomes very important to their survival. You also have a friend who has things in her life that she wants to improve, but she is being a great friend. There is also the unknown hiker who never speaks, is creepy and following them for no reason. I thought the tension builds throughout and ends with a solid climax. There is also a slight lull after the first real horrific scene, which is good to allow the viewer to process. I also really love the setting, as it isolates them and also can be a reason they might not survive.

I thought the acting was pretty good across the board. There are only four actors, but they all do a fine job. I give a lot of props to Nichols. He really has to play the teen that is being treated like a child and has to step up and show his mother that he isn’t. He really impressed me with his acting job. Paige broke my heart when she is pouring out everything to Ochse. She also has to deal with sheltering her son from what is happening, but needing to see that isn’t a baby. Ochse was good as the friend that is trying to help her Paige cope with everything that is going on. Duhamel was interesting, because he has no lines. All of his acting was facial expressions and body language. I thought he did really good with what he had to do.

There isn’t a lot in the way of effects for this film, but the ones that were used were practical. I thought they were well done and the blood in this film looked real. The editing of the film was good. It runs 78 minutes and the only lull in the film was needed so they could let the audience process what happened, before rebuilding the tension for the next night. There isn’t much in the way of the score, but it is used to ramp up the scenes when they needed it. I also find the music Duhamel plays when he has someone to be quite creepy.

Now with that said this film I came in not knowing a lot and really enjoyed it. It is quite simplistic. It has a great setting being out in the wilderness which helps create the feeling of isolation. We don’t know why this man is stalking them and that makes it scarier to me. What happens in this could really happen. I love the concepts and how things play out in this film. The acting is the good. While there’s not a lot in the way of effects, they were done practically and I really liked them. The editing of the film was tight and helped build the necessary tension. There wasn’t much to the score, but it was used effectively when needed. I think this is a good film and definitely worth a viewing.