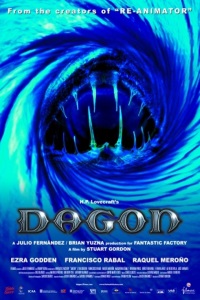 This was a movie that I actually gotten confused. I remember seeing the cover on the VHS for this movie, but I always thought this movie was much older than what it was. The cover has stuck with me and it had been on a blind-spot list for me. I really wanted to see it even more when I learned that Stuart Gordon was the director here and that it was adapted from the works of H.P. Lovecraft, who I’ve started reading more of prior to seeing this. The synopsis is a boating accident runs a young man and woman ashore in a decrepit Spanish fishing town which they discover is in the grips of an ancient sea god and its monstrous half human offspring.

For this movie we start with who we will learn to be Paul Marsh (Ezra Godden) scuba diving. He comes up on a stone structure under the water that looks like an eye. In the center is a tunnel that goes deeper. Paul goes down it where he touches the wall and it is made of gold. He then sees a person that doesn’t have scuba gear on. We will later learn her name is Uxía (Macarena Gómez). She attacks him with monstrous teeth.

Paul then wakes up from his nightmare. He is in bed with Bárbara (Raquel Meroño). It appears that Paul recently made a lot of money so they off celebrating. The boat they’re on belongs to a rich couple of Howard (Brendan Price) and Vicki (Birgit Bofarull). Bárbara gets upset that Paul is on his laptop and she throws it in the water, upsetting him.

Things take a turn as a storm rolls in much faster than it should. The waters get wild and the boat is disabled when it is pushed into nearby rocks. Vicki was below deck and injured in the crash. She is also trapped in her spot. It is decided that Paul and Bárbara are going to shore for help. It is unnerving that there is an odd humming coming from the small village, as they are off the coast of Spain.

When the couple arrives, there doesn’t seem to be anybody there. They go to the church where the humming is coming from. Paul gets nervous as above the door is the same symbol from the structure in his nightmare. They knock and the humming stops. Inside they do find Padre Ezequiel (Javier Sandoval). He tries to help the couple by getting a fishing boat to head out to rescue the others.

Things aren’t as they seem here in the village. When Paul returns to shore, he cannot find Bárbara anywhere. He does see the villagers acting strangely and they seem to be coming for him. Can Paul find out what happened to Bárbara and get away from this cursed place before it is too late?

That is where I’m going to leave my recap of this movie. Coming into this, I was actually curious as to what was going to be done to extend the story since the source material for Dagon is really only a few pages. As I was watching this movie, that was when I realized they combine it with another Lovecraft story of The Shadow Over Innsmouth, which is a majority of what we’re getting here. Instead of setting it in the New England area, they shifted it over to a village in Spain. This changed really worked for me.

Where I want to start, I’m really a big fan of where they set this movie. Through dialogue we learn that Paul is actually of Spanish descent. For some reason his mother didn’t want him to learn the language. This makes an interesting dynamic that Paul cannot speak the language of the area, making him a fish out of water, pun intended. Bárbara does speak the language so the stretch where she is missing he is lost. It adds a feeling of unease not being able to converse or understand those around you. I wasn’t in a harrowing situation like this, but I know the feeling when I was in Barcelona.

Going along with this, I’m really glad the movie decided to use to The Shadow Over Innsmouth as the basis of the story. There is actually a structure there and seems more adaptable to the screen like we get here. Much like the story, when Paul looks out the window and sees the villagers milling about is creepy. It goes even farther with what they do from there and gets the anxiety going. There is also a great part of this that Paul is being called there and he doesn’t know why.

What I want to do though is go to the effects next. We get some practical ones in this movie. For the most part, those are good. There is some of the fish stuff that looks a bit cheesy, I’ll be honest there. The blood does look good and there’s even a scene where we see someone getting skinned that worked for me. I would even say that I’m fine with the cinematography. The big issue though is the CGI. It isn’t very good and doesn’t hold up. There is a moment where we get to see Dagon, which I did like that they tried it. That is about the extent of my thoughts on that.

Then the last thing I want to go into would be acting. Coming into this movie, I thought that director Gordon was teaming up again with Jeffrey Combs. I was shocked that it was actually this actor of Godden. I don’t think it is an accident that he is made to look like him here. I thought his performance as solid, even though I think he’s trying to play Combs in this movie. Francisco Rabal is solid as Ezequiel. He is really here to fill in back-story as the drunken character from the story. It fits for me. Meroño is quite attractive and I thought she worked as Bárbara. Gómez is also solid as Uxía. We do get see both topless as well, which if you were looking for that we get it. I would say the rest of the cast fit for what was needed in rounding this out.

In conclusion here, I think that this is a solid adaptation that is coming two Lovecraft short stories. In reality, it is pretty much adapting The Shadow Over Innsmouth and taking the name of Dagon. That doesn’t bother me though. I think that the setting of the movie works. Having the character of Paul not be able to speak the language adds an element of horror for me. The acting works across the board in my opinion. The effects are hit or miss though. I still like what they’re doing here and would say that this is an above average movie aside from my slight issues with it. If you like Lovecraft, I would say that one works and worth a viewing.