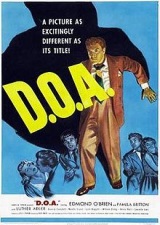 In this film we have man coming into a police station, played by Edmond O’Brien, and tell them he is there to report a murder. When they ask whose, he tells them his own and begins to retell the tale of what happened to him.

The film then begins with O’Brien at work. He is doing some deals and he flirts with a lady, but we learn quickly that he has a relationship with other the one there, played by Pamela Britton. He then learns that he is going away to San Francisco and he is not taking Britton with him.

Over drinks she tries to convince him to take her, but to no avail. She finally gives up trying and he goes. Once there he keeps checking out the women he sees and flirts with others, showing he isn’t committed to the woman he has at home. A party across the hall attracts his attention and he is invited over. He goes out with the group to a jazz club.

While there he breaks away to the bar where he meets another lovely lady he is attracted to. We see a strange man switch out his drink for another and even O’Brien notices it tastes different. It isn’t until the next day when he isn’t feeling well that we learn he has been poisoned. It is now a race against the clock to discover who did this to him, why they did it to him and how they are all connected. When he speaks to Britton we learn there was man who urgently needed to speak to him, but he is now dead.

This film got a little bit confusing to me. I got lost trying to figure out who was who aside from O’Brien and Britton. O’Brien as he runs all around Los Angeles trying to find people, I began to lose track of who the people where he came to see. That was really the only part that I had trouble with.

With that being said, it is interesting subject matter. Investigating your own murder as it happens. Most don’t know they’ve been poisoned and can really do nothing about it, this film is much different, as he finds out he’s been poisoned, but it is too late to reverse the effects, all he can do is solve the crime or die not knowing.

I would say if you’re a fan of Film Noir to give this one a chance. It isn’t amazing or major film in the genre, but it does have a different story than many of them and gives it a different feel. I would say to give it a view if you’re into mysteries as well, but again, don’t expect it to be the best film you’ve seen from the genre, just a decent one that is enjoyable.