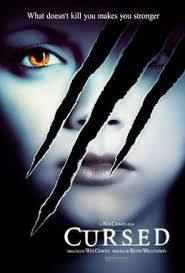 This was a movie that I first watched in college. Looking back, it had been out for a few years before I got around to seeing it and I didn’t even know that. All I knew was that this was a werewolf movie and that I didn’t really care for it after that first viewing. The synopsis here is a werewolf loose in Los Angeles changes the lives of three young adults, who after being mauled by the beast, learn they must kill it in order to avoid becoming werewolves themselves.

Now I will admit, this synopsis is a bit off and misleading. We start this off though on a boardwalk with a carnival going on. We have two friends, Becky (Shannon Elizabeth) and Jenny (Mya). Jenny is concerned about the guy that Becky is hung up on and she drags her to a fortune teller. Her name is Zela (Portia de Rossi). This scene is quite reminiscent of the original Wolf Man. She warns her of blood, the moon and an evil beast.

We then shift over to Brooke (Kristina Anapau) who is working in a store and Jimmy (Jesse Eisenberg) comes in when his dog Zipper (Solar) gets away. Her boyfriend, Bo (Milo Ventimiglia) shows up along with his friends and they mock Jimmy.

Jimmy’s sister is Ellie (Christina Ricci). She is supposed to pick up Jimmy, but first she stops in the club her ‘boyfriend’ is putting together. He is Jake (Joshua Jackson). They talk and this theme of the club is Hollywood, with a horror vibe to it as well. He seems a bit off and she leaves, giving him space.

The siblings are driving home with Jimmy really upset that he had to wait over an hour for her to pick him up. An animal runs across the road and Ellie hits it, causing them to crash into another car. One of them topples down the side of the hill and Ellie goes to check on the driver. This is Becky and Ellie tries to get her free. Jimmy calls 911 before going down to help as well. Things take a turn though when a wolf busts the window and takes Becky. The siblings are both bit in the process.

Jimmy starts to look into wolves and finds evidence that they might have been bitten by a werewolf. Ellie doesn’t believe it, but we see there are very similar traits to what her brother is claiming happening to them. Ellie works as a producer for a television show, or at least that’s what I think. She is trying to juggle that, Jake who has gotten weird, all of the women that are attracted to him as well as Joanie (Judy Greer), Scott Baio’s publicist. Are they really becoming werewolves or just their imaginations?

With that recap out of the way, I do have to say that I still really didn’t care for this movie unfortunately. That’s not to say it is all bad though, there definitely are some good aspects to it.

Where I want to start is Wes Craven directing this with another screenplay from Kevin Williamson. Of course, they’re behind Scream and they do try to incorporate more of that meta approach to this werewolf story. They don’t go as heavy in it with a character explaining it, but Jimmy does research and relays it to his sister. I’m fine with this. The movie features a wax figure of The Wolf Man, the silver cane head from the movie as well as the pentagram on the hand. There’s even a fortune teller who is giving lore to it as well. What I also found interesting is that Rick Baker does the effects for the creature and we get some scenes that seem like they’re referencing An American Werewolf in London.

They just really can’t capture that charm that Scream had in my opinion. There’s the scenes where Bo accuse Jimmy of being gay and I feel they go to that well too much. In order to not ruin this, they decide to have a reveal, which I can see this being used to remove doubt from them, that’s fine. It just doesn’t have much heart behind it for me if I’m honest.

It is a shame though with this cast. Ricci is normally really good as an actress, but this movie she just seems flat to me. She is supposed to be brooding, which she has down, but that’s about it. She is quite attractive, I will give her that. Eisenberg does well at bringing his quirkiness to the role, but I think that’s just him. Jackson is fine along with Mya, Rossi, Elizabeth and Anapau. I didn’t like how they wrote Ventimiglia and what they do with him in the end is odd. I did like that Derek Mears plays the werewolf due to his imposing size, that fit and we also get a cameo by Nick Offerman as a police officer.

Something I wasn’t the highest on was the effects. The initial shot of the werewolf was great. Baker’s effects there were on point and it really felt like An American Werewolf in London or The Howling. The problem then becomes they decide to go CGI for a lot of shots of the creature. That doesn’t really hold up or work for me. The transformations we get are also done with CGI which goes along with not looking good and a dog/werewolf thing either. The only time the computer effects were fine would be the enhancement of eyes or things to this effect. There really aren’t a lot of deaths on screen either. I believe the explanation is that there’s a director’s cut that is not being released, which having rewatched this, I am intrigued for that and joining that camp. The cinematography aside from that is fine and I didn’t have any issues there.

That’s all I really wanted to go over for this movie. I do think that the team of Craven/Williamson tried to strike gold again by taking on a creature feature, but it falls flat. I do like the meta aspects they tried to incorporate. The problem though is that there isn’t much heart from the acting. I found it to be boring and I think the lack of deaths on screen is a big factor there. The practical effects of the werewolves looked good, but they decided to go CGI heavy which I’m not a fan of. The soundtrack is really mid-2000s. It doesn’t add much aside from fitting the era. I can’t really recommend this movie as I didn’t really care for it. If the director’s cut ever comes out, I would be interested to give that a viewing for sure. I found this to be below average after this second viewing unfortunately.