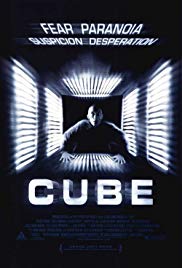 This was a film that I remember watching for the first time and not having any idea what it was. My roommate in college had gotten a copy and I believe that was because he heard how well it did at festivals. It was an independent film that kind of came out of nowhere. I hadn’t seen it since that one time actually. When it came up as part of the podcast series I’m participating in for the Best of the 1990’s, I was excited to rewatch it. The synopsis is six complete strangers of widely varying personality characteristics are involuntarily placed in an endless maze containing deadly traps.

We start this off with a man in an odd room. It is a prefect cube and he goes to one of the exits. His name is Alderson (Julian Richings). He tries to flee this room, but the next room is booby trapped and he’s killed.

It then shifts to another room. Quentin (Maurice Dean Wint) starts to look around. He finds a knocked out man named Worth (David Hewlett). They are joined by Leaven (Nicole de Boer), Holloway (Nicky Guadagni) and Rennes (Wayne Robson). They try to figure a way out, but they learn about the traps. Rennes has come up with a way to detect them by tossing a boot into the room.

As they try to find a way out, they try to remember the last thing before waking up here. They also start to delve into who they are to figure it out. Leaven is a mathematician that’s still in college. Holloway is a doctor, Worth isn’t forth coming about his past, Rennes is a thief who has escaped from multiple prisons and Quentin is a police officer.

We soon learn that Rennes method doesn’t work and Leaven realizes that there are numbers in each of the access points to the rooms. They are a key to figuring out if the rooms have a trap or not. They also stumble upon Kazan (Andrew Miller), a severely autistic man.

The longer they go, the more they learn about each other and their nature. There are secrets here and as the tension grows, we see the darkness of humanity. Can they figure out this prison they’re in before it is too late?

Now I wanted to go a little bit light on the recap, because if I didn’t I would have to go into spoilers and I think some of the best part of this film is actually experiencing. I will say that I love how basic the premise is. We never actually learn why they’re there and I think that is actually scarier. They all have their reasons for being in this, but outside of that, there are others they could probably do the same things as some of them.

What is really important that I took away from this film though is the darkness of humanity. I’ll actually go into the acting here as well. Boer does a solid job at portraying a college student, even though she does look a tad on the older side to be the age she supposed to be. She does get really down about their plight, but when she realizes the help she can do, she moves into action. Guadagni is also good as she is one of the first to stand up to Quentin. She also gets push back, but she is also showing the good that is in humanity. Hewlett is interesting in that at first, we see him as a villain. There is a reveal about him that makes you think he’s up to something, but I like the growth of his character. The performance plays it well. Miller has a reveal I ended up really liking and it fits with the story. Wint though does a great job here. He makes for a great counter to Worth and it makes the film even better as things breakdown, especially in a situation like this.

I couldn’t get through this without talking about the historical context either. This film was an independent and from what I gathered, it did really help horror by doing as well as it did. If it hadn’t, I’m sure I’d never have heard of this. Going from that, it is also a film that helped to influence the ‘torture porn’ era of films that would come in the next decade. There is kind of a ‘game’ here and the traps directly influence Saw, Hostel and The Collector. There is a bit of back-story revealed through Worth. There are a few things tossed around, like this could be the government or some rich sicko who is doing this for a game.

To move next to the pacing of the film, I think that is something else that is really good. It has a low running time, which works here. It never really hits a lull and since they are making educated guesses to stay alive, there is always that threat. The acting performances really drive the film and we get that feeling that as the tension grows with each frustrating thing that happens, the darkness of people shows more as well. It reveals the true characters. The ending definitely works for what the film is going for as well.

Something that I didn’t really remember was the effects of the film. This film had a low budget, which is interesting, because technically they only had one and half ‘cube’ rooms. They had to make them look different with lighting and to be honest, it worked. It feels so much bigger than that and it is surprising. The practical effects in the film are really good as well. There is an issue though I had with the CGI. Not all of it was bad, but some of it doesn’t really hold up and that is something I noticed about the film. It is shot very well though in my opinion.

Now with that said, this film for its budget is actually really good. It blew me away the first time I saw it and to be honest, it still holds up fro the most part after this second viewing. The story is really basic, but it definitely shows us the darkness of humanity. The film also has historical significance with films that came after. It is paced in a way that it never gets bored. The movie is driven by the acting, which is good across the board in my opinion. The practical effects are also well done, but I do have say that the CGI doesn’t really hold up. The soundtrack didn’t really stand out to me, but it also didn’t hurt the film either. I would say that overall this is a good film and I would actually recommend this one for horror and non-horror fans alike.