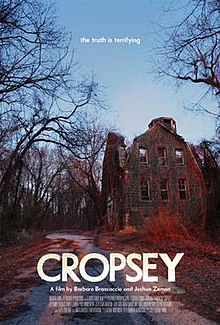 This was a documentary that I’m pretty sure I heard about through a podcast, but I’m not sure which one and if that was the case. I was intrigued to check this out as I knew it was the name of the killer from The Burning and it appears to be the name of the boogeyman for the New Jersey/New York area as well. It also was in the horror movie encyclopedia I’m working through as well. The synopsis is realizing the urban legend of their youth has actually come true. Two filmmakers delve into the mystery surrounding five missing children and the real-life boogeyman linked to their disappearances.

As I was saying above, knowing the title of this movie, having seen The Burning, I thought this was going to be a documentary about that urban legend killer from what I was talking about above. That is really how this starts, but we don’t get much of that after the fact though. Joshua Zeman and Barbara Brancaccio, who made this, are also people that interject themselves into it. Both grew up in this area of Stanton Island and have variations of this story that were told to them growing up. What makes this even scarier though is the other history of the borough they grew up in.

They give the history of Stanton Island which I didn’t realize was one of the last ones to get populated, but before it did, it was more woodland area. It is kind of depressing as well as the New York landfill is located there and that’s not the only thing getting dumped in the area. We also have a mental hospital and another hospital nearby where they put tuberculosis patients as well as other dangerous afflictions. There’s an interesting dynamic that Geraldo Rivera did an exposé, back when he was a news reporter, about this place and help lead to its closure, eventually. This isn’t where the story ends though.

The major story of this documentary is the disappearance of a Jennifer Schweiger. She had Down syndrome and her mother spearheaded a search for her to be found. The prime suspect is a man named Andre Rand, a homeless man living in the abandoned school and hospital. He was a drifter and had an odd look about him, so he was branded the person who had to be responsible. The question is though, is he?

There are a series of disappearance, which this documentary is correlating to the urban legend of Cropsey, and it being attributed to Rand. This really focuses on trying to present as much evidence against and for him, showing us information from around the time of the initial investigation and the present of when this was made.

What makes this different though is that it is a documentary that isn’t that much different from a Making a Murder or Don’t F*ck with Cats, which I wouldn’t place as horror. The horrors of a serial killer or a killer in general are definitely in that vein in real life. I feel this falls into the horror camp is the fact that this urban legend is based in horror films and how this documentary is presented is darker than those other documentaries. Not to say the subject matter isn’t. Any time you have someone murdered, it is way more horrific then any movie. I just mean that this is presented much more as a horror movie.

I do have to give credit though that Zeman and Brancaccio do well at presenting this without bias. One of my big issues with Making a Murderer is the research I did afterward they left a lot out and slanted it in favor there. I don’t want to delve into that for a documentary about this other person, but this is really shown much more in the way of showing us facts and letting you decide.

For me, I personally have a bit of trouble believing that 100% that Rand is the killer. I was confused if in the beginning that this man was a patient or a worker at the hospital before it closed. I do feel bad that he was homeless and that he was convicted on circumstantial evidence as well as how he looked. I haven’t looked fully into this, but from what I’ve been given I have doubts.

The last thing to cover would be how creepy this abandoned hospital. There are tunnels underneath where it is claimed that homeless people live. Rand was thought to be down there with others, which is probably true. On top of that, there are some religious people who claim he was innocent or at least guilty of kidnapping only. That gives it a dark turn and that he could be mixed up with the same people as the Son of Sam Killer, David Berkowitz. There’s not a lot of evidence to support that, but it does give it an even more eerie feeling. There is something up though with how some information is found.

To just wrap this up, not the best documentary I’ve ever seen, but I do like how it is constructed. I think it is done well without an agenda in presenting the facts. I do have a slight issue with the title and drawing in fans of the horror genre with the fact that this is the killer from The Burning. The parallels they drew ended up getting me over that so it doesn’t ruin it. I am interested in looking a bit more into this case to see what could have been left out as this did keep me interested all the way through for sure. I would rate this as above average overall.