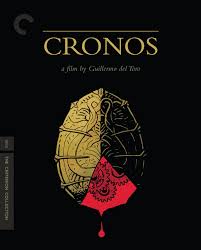 This was a film that I read about in Fangoria as they had it listed on their Top 300 horror films of all time. I was intrigued when I learned this was written and directed by Guillermo del Toro, because I’ve seen quite a few of his films and they are quite good. I knew this one was kind of a different take on the vampire and that intrigued me. The synopsis is a mysterious device designed to provide its owner with eternal life resurfaces after four hundred years, leaving a trail of destruction in its path.

We start here with an Alchemist (Mario Iván Martínez). He comes to Mexico, fleeing the Spanish Inquisition. He is tasked with creating something that will keep the owner living forever. Since he was also a watchmaker, he makes a contraption that uses gears and will do just that. The Alchemist is killed though when his building collapses and there’s something unnatural about how his skin looked.

It then moves to the present. Jesus Gris (Frederico Luppi) lives with his wife, Mercedes (Margarita Isabel), and their granddaughter Aurora (Tamara Shanath). He runs an antique shop while his wife teaches dance. Jesus goes in to work with Aurora and we notice there’s a statue that belonged to the Alchemist in his shop. Cockroaches come out of it and Jesus checks it out. He learns there’s something hidden in the base. It looks like a golden egg and there is a way to crank it. He does and then arms come out of the side and it latches to his hand. He removes it and is shocked by what he’s found.

Also in touch is a wealthy man De la Guardia (Claudio Brook). He is currently dying and he employs his nephew, Angel (Ron Perlman). Angel gets a call about the statue and he’s told by his uncle to go check it out. He does and buys it to take back to his uncle. We actually see that his uncle has been searching for this very one and has found others in the past that aren’t quite right.

Jesus looks into this item again later that night. Now that he’s prepared, he lets it attach itself to him and we see inside of it. There’s some kind of weird insect with a stinger, much like a scorpion, emerges. It stabs into Jesus’ skin. The following morning, he feels quite a bit younger. He even shaves his mustache to the joy of his wife. When he gets to work and finds it’s been trashed, not so much. He does find a card for De la Guardia.

He does meet with this man to see why his shop was trashed. That’s when De la Guardia reveals some of the history of this contraption; about what it holds and that it’s what he’s been looking for. Jesus plays like he doesn’t know anything about it, but De la Guardia can tell from his wounded hand that’s not the case. He will stop at nothing to overcome his own mortally for this item.

Something interesting about seeing this film now is that I can see the talent that del Toro has. This film has a dreamy, fairy tale feel to it, but it is still much more grounded in reality than some films he will make later on. It is just kind of interesting to see him already putting his mark on his work this early.

Now I do like the concept of the vampire here. We never actually learn what the insect is that is living inside of the device. The machine is kind of shaped like a scarab, which could equal Egypt, but then again it also kind of looks like it could be a scorpion. Regardless, I did find this pretty interesting that the cause of all this is from an insect. I do kind of wish we would have gotten more the vampire aspect though. I understand why we don’t. Jesus stumbles on this. He doesn’t have the ancient text and even if he did, he couldn’t read it. I like that he is reluctant to give into his thirst as he’s a good guy.

There’s also an interesting dynamic here. We have a family that is living a meager, but good life. It isn’t until Jesus is given a taste that he starts to turn and want more. Angel really just wants his uncle’s money as he is the beneficiary. De la Guardia is definitely a rich man who really probably hasn’t lived life to the fullest, probably worrying about his own mortality. Now that he is, he wants to live forever, knowing that he’d lose his fortune in the process.

I do feel this film has an interesting story and concept, but I do think that the pacing is a bit slow. I’m always down for a slow-burn if we’re given the right elements around it. I think the set-up is really good. It builds to the device being found and Jesus being tempted by it. I do think from there that it kind of just meanders a bit and I found myself bored. That is not to say that I wasn’t interested and that I didn’t like how it ended, that’s really not the case. I just feel that film didn’t really know where it wanted to go and focused on some of the wrong things for me.

I will say that the acting is pretty solid. I really liked Luppi in his performance. He starts off as a content older man. When he gets a taste of whatever is in Cronos, he starts to want more. It becomes an addiction and he starts to act younger again. I thought Perlman was pretty solid. He actually made me chuckle and his opposing size just works for this role. Brook was solid as De la Guardia. It is hard to hate him, even though he is quite villainous. I did think that the rest of the cast was fine and rounded out the film for what was needed.

Something that I did think was really good was the effects of the film. I was glad to see that they went practical here for the most part. The blood we get looks pretty real. The effects of attacks are as well. During the ending sequence, how Jesus looks was quite unnerving. I do think there might have been some computer effects for what is happening within the device. That didn’t bother me in the slightest and well used if I’m honest. I do think the film is shot very well.

Now with that said, this film is an interesting take on the vampire lore. I like the idea of this contraption being created to prologue life. It is interesting to go to a man who really isn’t looking for it and the changes that come over him. There is kind of the aspect of the rich vs. the poor here through this concept. I do think that the film does have some slight pacing issues and kind of meanders. That isn’t to say I don’t like where this film goes, because that’s not the case. The acting I thought was pretty solid and the effects of the film were really good. Soundtrack didn’t really stand out, but it did fit the film for what was needed in my opinion. Overall I’d say this is a good film, just lacking in some minor aspects to put it over the top.