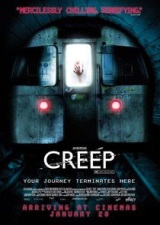 This was a movie that I believe my sister turned me on to when I was in college. I got the movie from Netflix back then and ended up thinking it was pretty interesting. I also picked up a DVD copy that I hadn’t seen since that one time viewing. For this second viewing, it was part of the Summer Challenge Series over on the Podcast Under the Stairs as I’m still working that list of movies. The synopsis here is trapped in a London subway station, a woman who’s being pursued by a potential attacker heads into the unknown labyrinth of tunnels beneath the city streets.

We actually begin here with George (Vas Blackwood) and Arthur (Ken Campbell) as they’re walking sewer tunnels. Through their conversations, we learn that George is out on parole and that is why he’s working here. Arthur has been doing this for a long time. They come upon a hole in a wall that leads to a new tunnel he’s never seen before. There’s something in this tunnel with them. I should also point out that the title sequence we get here shows us medical rooms that are dingy and a woman being pulled back into a room by something as well.

The movie then shifts us over to a party. Kate (Franka Potente) is looking for her friend as they’re going to another bar where George Clooney is supposed to be that night. Kate’s goal is to take him home. At this party though, inappropriate advances are made by a co-worker of Guy (Jeremy Sheffield) that she rebuffs. Kate learns her friend already went home so she tries to get a taxi. When that doesn’t work, she then decides to take the subway.

Kate has some issues getting the pass she needs for the train and ends up paying a homeless woman of Mandy (Kelly Scott). While waiting for the train, Kate produces a little bottle of liquor and drinks from it. She falls asleep while waiting and ends up missing her train. To make matters worse, she’s locked in now.

A train does arrive and she gets on to it. She’s not alone though. She is attacked by this person who has the intentions to sexually assault her, but there’s something even scarier down here. It becomes a night of survival as she tries to find a way out or the worst case, can she make it until morning when they open again? The other question would be what is this thing that is after her?

That’s where I’m going to leave my recap for this movie as that gets you up to speed to where it goes from there. All I’ve really given here would be the first act that gives you a bit of back-story and then gets our main character trapped down in this subway station for the night. What is interesting is that I’ve been to London and have ridden on these trains that we’re seeing here. I bring this up because when the people I was there with, when it got to a certain time, some of these stations would lock up and not going to lie. I had already seen this movie once so it was spooky. I wasn’t fully locked in if you were worried though.

That is where I want to start. I think that we have a great setting for this horror movie. The cinematography down here in the station and tunnels really works for me. A place like this that we’re used to it being busy is quite creepy when it is empty. I really like that this movie is showing us the secret places as well. Mandy and Jimmy (Paul Rattray) live down here. They opened a door into a place that is hidden and looks like a place where they have pipes and what not. You don’t realize that they’re there. There is also even more of this with what George and Arthur find as there’s a whole secret laboratory and operating theater.

This odd section that was hidden is where I’ll go next. There is legitimately as I said medical style rooms down here. This is where I do have a gripe with the movie, we never really get much of why this is here. The movie runs 85 minutes, so I don’t know if they cut some of this back-story here or just didn’t want to give it to us. I think that even 5 to 10 minutes of just a bit more of what they’re doing down here would have helped me. We get to see fetuses in jars and a picture to explain a bit, but as someone who loves the story of a movie, I wanted more there.

I’m going to take things to the effects next. Since I’ve already leaned into the picture, our true villain here is Craig (Sean Harris). I’m a fan of this actor and just looking at him, I wouldn’t have guessed that was him with the make-up that did on him. I like how creepy he looks and that name really goes along well with the title. The other part there is what Guy attempts to do Kate makes him a creep as well. Aside from the look of Craig and how this attire helps to explain a bit more of the back-story, I think the blood we get was good. I think I wanted them to go a bit farther with the effects, but I’m not going to hold that against the movie.

The last thing that I really should go over would be the acting. Since I’ve really leaned into him, Harris does a great job without really having much in the way of lines. He does a lot with things that he does that show he’s seen other people do them and he is just mimicking them. He does relay things he hears that makes his performance that much creepier. I think Potente was solid in her role as well. We see her fighting for survival, but she is tough from the beginning. They establish that immediately so I don’t think what she does here changes her which makes it a bit of an issue. I like how she stands up to the males that are coming on her though. Blackwood, Sheffield, Scott and Rattray were all solid as well in rounding this out for what was needed in my opinion.

In conclusion, I think that this movie has an interesting setting and makes for a decent little slasher-esque film with this mutated human. I do think that this movie is lacking a bit in back-story to really pull in though. The effects are solid and the cinematography utilized to really show the scope of where it is taking place was good. The acting was good as well. The soundtrack really didn’t stand out to me, but it did some good things with the stalking that we get. Overall though I would say this is above average movie just lacking what it needs to go higher.