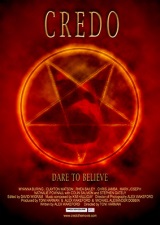 In this film we begin inside of a library. We see our main character, played by MyAnna Buring. She is kicked out because the place is closing. This seems to be something that happens often from how she reacts and how the guy who does tells her.

When she comes home, one of the guys she lives with, played by Clayton Watson, is arguing with someone at the door and he is pretty rude about it. Buring goes up to her room despite the party that is going on inside her place. We also meet another of her male roommates, played by Mark Joseph. He has a camera in her room and watches her as she prepares for bed.

The next day, the man from the night before who Watson was rude shows back and we learn that is their landlord, who isn’t very happy with them. They’re kicked out of the apartment and homeless. Buring goes back to the library and throughout the day Watson tries calling her. Finally as she is kicked out, we learn he has found a place, an old school that has been closed down.

They go to stay the night and we learn some history about the place. That story goes some theology students in order to test their faith summon a demon that kills 4 of them, all but the one student who left the summoning before it was finished. The twist is it gets them to commit suicide, the mortal sin. That night, weird noises are heard and some strange things begin to happen. Will they survive the night? Or will they meet a similar fate as the students did?

This film has a solid story to it, but it comes off a little bit boring to me. I’m glad they never show the demon, because most of the time it is a disappointment when they do. A good thing this one does is have it hidden the whole time and makes it scarier, but I’ll warn you, this one isn’t all that scary.

Nothing really seems to happen and it is a lot of arguing and bickering back and forth. They never really show any the death scenes either, but again that sometimes can work in the favor of the filmmaker.

I will say though, the ending to this film is probably the best thing it has going for it. I didn’t expect it and it does provide a nice twist to what we have seen happening the whole time. I would not recommend this, unless you are a horror film fan and can some leeway to these types of it.