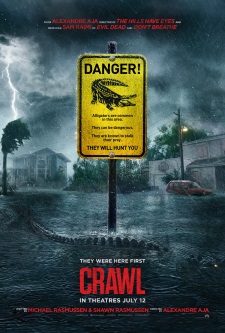 This was a film that I was intrigued to check out because the premise is simple while also being great. I’m down for creature features, especially ones with alligators or crocodiles, since they’re just a scary animal to begin with. The idea of being trapped in this crawlspace with them, I was in. The synopsis of this is a young woman, while trying to save her father during a category 5 hurricane, finds herself trapped in a flooding house and must fight for her life against alligators.

We start this off at a swim practice at the University of Florida in Gainesville. Our main character is Haley (Kaya Scodelario). She loses her leg of a relay and she is upset with herself. In the background we see dark clouds looming and in the locker room we see that a hurricane is on its way. Haley has some missed calls from her sister, Beth (Morfydd Clark) and they connect for a video chat. It appears the hurricane is changing course and is now supposed to hit them. Beth asks if Haley has spoken with their father and she says she hadn’t. Haley decides to check on him, even though they’re currently not speaking.

Haley is stopped on her way by Wayne (Ross Anderson). They know each other from back in the day and he tells her she can’t go in. She ignores him and takes a different route. She first heads to his condo he is staying in and he’s not there. Their dog is though and she knows something isn’t right. She heads to their old house and it is there she sees her father’s truck.

There’s no sign of him inside. She searches around and hears a radio. This leads her down into the crawlspace and she finally finds him. His name is Dave (Barry Pepper) and he’s out cold. There’s also a bite wound on his shoulder. She tries to drag him out and she finds out what attacked him, an alligator. It chases her and her father back into section where pipes are blocking it off enough.

Dave does wake up and they must figure out how they’re going to get out of here. The problem becomes that the hurricane hits and water is starting to fill up the crawlspace. There’s more than just one alligator down here and it becomes a fight for survival.

Now I have to say, I had a lot of fun with this film. This is a popcorn flick, but it does have some heart to it as well. This family is broken up. Haley went off to college and her parents divorced. This has kept her away from seeing her father as she feels guilty for taking up his time with her training. Beth has moved to Boston and her mother is in Europe, so Haley has isolated herself. Dave isn’t good with his words or opening up, so they’ve just gone on this way.

Going farther from that though, Dave doesn’t want to let go. He came out to the old house to try to seal off some pipes to ensure the house isn’t destroyed. There are pictures out in his condo of his family and how they’re not around. The film does address that he doesn’t want to give up the house with all its memories, so I think that is part of it. Seeing these two reconnect during this harrowing time gets me invested enough.

I’ve already touched on this a bit as well, but I do like that this film is grounded. Alligators are something that looks like a dinosaur. Even more than that, they are efficient killing machines. I like that they are just normal animals that are hunting for prey. There is a reveal in the film that addresses why they’re being more aggressive here and it does make sense. I also love that the tension builds as the crawlspace floods. It is realistic as this could really happen. There is also a looming threat that the levies could break as well.

There are a couple references made here that I need to point out, before moving away from the story. The first is that Haley attends the University of Florida, which their mascot is the gator. The other is that Dave’s nickname for his daughter as a swimmer is that she is the apex predator. Alligators are this so I thought it was an interesting correlation. We do get some unbelievable things like Haley outswimming an alligator, but I can shut off my brain enough for that.

Speaking of building tension, I think this film did a good job there. We get the type of film where we have out of the frying pan into the fire. They try different ways to get out and they are foiled at different steps. I like that the film never hits a lull because of this and just moves at a good pace through everything. It has a low running time which also helps in my opinion. I like how the film ends as well.

To move next to the acting of the film, which I thought was good as well. Scodelario is someone I’ve seen in a few things but didn’t realize it. I like that we can see she is dealing with things and that could be affecting her in her swimming. I like that she needs to address these issues to survive. She also isn’t bad to look at. Pepper is good as well. I’m just a fan of him and I thought he fit into this role very well. He is there to encourage Haley, even if she doesn’t realize she needs it. Clark is solid to start the ball rolling to get Haley where she is and I thought she was fine there. The rest of the cast rounds out the film as well for what is needed.

Something I was concerned with coming in are the effects. I knew that the alligators were going to be CGI and I can’t fault the film there. To be honest though, I thought they did a good job with them. There were a couple of moments that I could tell, but for the most part I thought they looked and moved like the real thing. I even like they incorporated how these animals try to kill their prey. The wounds and blood looked good. There is a bone scene that made me cringe as well. If anything, there are times where characters should be a bit more hurt than what they are. This is a nitpick. The same for some ways they get away from the animals as well. Regardless, they did well with the cinematography, especially the underwater scenes.

Now with that said, this film was a lot of fun. It is more of a popcorn movie, but there is a bit of heart in there as well. I love the idea of how they get trapped and the creatures that are hunting them. It is paced well; it never gets bored to a satisfying conclusion in my opinion. The acting helps this film as well, as I thought both stars really give depth to the characters. The effects have a lot of CGI, but they did good with it. The soundtrack didn’t stand out, but it doesn’t hurt the film either. I did like that we hear people and things around them that drive the tension and the story. I would say that this is a good film and one of the better alligator films I’ve seen.