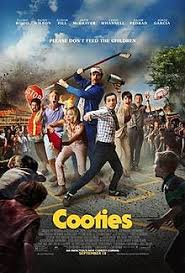 This was a film I heard about on a couple of horror movie podcasts. One of them actually interviewed Elijah Wood about this film as well. I know this is one of the first titles that came out from his production company and he starred in it when they couldn’t find anyone to fit the role. The zombie genre is definitely one that I feel is a bit played out, but there can still be some gems from it. The synopsis of this one is a mysterious virus hits an isolated elementary school, transforming the kids into a feral swarm of mass savages. An unlikely hero must lead a motley band of teachers in the fight of their lives.

We kick this one off showing how chicken nuggets are made. We see that one of them has something wrong with it as it is discolored. This one journeys into the cafeteria of an elementary school where a girl eats it. I’m not going to lie, when she bit into it and the goo came out, I was grossed out.

It then shifts to a bedroom where Clint (Elijah Wood) is woken up by his mother. He is staying in her guesthouse while he is back in town. He is a struggling writer and asks for her feedback. At first she just gives him the motherly talk of how good it is, but when he pries, she gives him what she really thinks. He goes off to school as a substitute for summer.

He arrives and we start to meet the odd crew. The crossing guard is a druggie named Rick (Jorge Garcia). He is awaiting a delivery of shrooms. Clint then meets with the vice principal Simms (Ian Brennan), who is a bit odd. He takes Clint’s phone as they don’t allow them on campus.

Clint heads to the teacher’s lounge where he meets the rest. In the parking lot he met Wade (Rainn Wilson) who is the gym teacher. He has a giant truck and is rude to Clint. There’s Tracy (Jack McBrayer) who is telling a story that makes him sound like he could be a homosexual. There is Rebekkah (Nasim Pedrad) who is a bit over the top in her feminism. Doug (Leigh Whannell) is the socially awkward science teacher who is trying to fit in. Clint sees a woman he went to school with, Lucy (Alison Pill). They talk and we learn she is dating Wade. Everyone goes to their classes to start the day.

It is here they we see the students are rude and quite unruly. Patriot (Cooper Roth) and Dink (Miles Elliot) are bullying a girl who has some blisters around her mouth. She attacks Patriot by biting into his cheek. The students start to become zombies and attacking each other. They soon turn their attention to the teachers. They’re forced to move room to room as they try to figure out what is going on and trying to survive. How far is this spreading though?

Now for those who’ve read my other reviews, you know my stance on horror/comedies. There are some that when done right, I love them. It is really a hard cross-over though to do in a good way. I have to say that this film falls into that category. When I was watching the opening credits, I was really surprised to see Whannell was one of the co-writers. I know him as he works with James Wan on a lot of films, but he is an excellent writer. This film definitely has that.

Zombie films can be hampered when you explain too much. This film doesn’t go into too much detail about what is causing this; we just know that it is from the chicken factory here in the town of Fort Chicken. What I really like about this is that the way chicken nuggets are made is gross. There’s a lot of talk about what we are putting into our bodies and how many don’t think about it. This idea is really socially relevant.

Going from this point, I like the idea of why it is only the children that are getting affected by this virus. I noticed that Clint gets scratched like many of the other children, but he never turned. It gets explained why and I think it is really genius. I could buy it for sure.

This film does pile on a little bit more comedy than I normally like, but I still really liked that aspect. The comedy is a combination of smart and slap-stick, which I can get on board for. It really actually had me laughing at some of the things. It has some running gags and thanks to this nature, but it doesn’t really sacrifice the horrific elements. There were times I felt my anxiety rising trying to figure out what they’d do next. I love the references back to 1980’s action films and their montages as well.

As I kind of alluded to, the pacing of the film is good. It doesn’t waste any time getting into the problem of the film and the violence happens pretty soon after. You never really feel that the characters are completely safe. I really like the character of Doug as he reveals more information about what is happening. He is really smart and good at science so how he figures things out is natural. I like the implications at the end of the film as it really is something that could happen.

The cast of the film really helps as well. I like that we have a bunch of comedians or at least actors with good comedic timing. Wood was really good as the hero. I’m glad he decided to take on the role, because I feel like it fit him perfectly. Wilson was great as well. He gives off an Uncle Rico vibe from Napoleon Dynamite and I liked it. He has some great lines. Pill was solid in her role as was McBrayer. Whannell was probably one of my favorite characters. His awkwardness was hilarious, but he is also very important to move the plot. Pedrad was also solid. She annoyed me as being overly feminist, but I think it fit the film. She was also quite attractive. They are all unique characters for sure and I think the rest of the cast rounded out the film for what was needed as well.

Something I was really surprised by were the effects of the film. They looked to be done mostly practical. The look of the zombies was really good. The blood had a very realistic look and the wounds that are inflicted did as well. These zombies do run, which I’m not the biggest fan of, but they are also children. I think it kind of is required to raise the stakes. There is a bit of CGI, but I think it is used in a way that doesn’t hurt the film in the slightest. I think the film was shot very well also.

Now with that said, I had a blast with this film. I think the social commentary that is in the film is actually something that is quite relevant. We have the issue of the food that is causing this pandemic and there is a bit of political correctness that we have to deal with on a daily basis. The acting was really good and the pacing helped to build the tension. The look of the zombies and the effects were solid. I think the soundtrack of the film definitely fit for what was needed. I don’t think this film is for everyone, but I do think this is one of the better zombie comedies that are out there. I felt this was a good movie for sure.