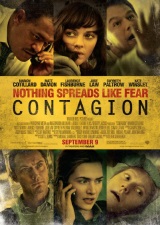 This film begins in few different cities, but originates in Hong Kong. A woman was there on business, but has left for the states; she is played by Gwyneth Paltrow. She looks sick and is at a bar in the airport. She then returns home to her husband, who is played by Matt Damon. Also there is her son. We also get a few other people that she had met there in their own places which include London, Tokyo and further into China. All of them have contracted what she has.

Paltrow returns home to Minnesota. Damon is glad to see her and distraught when she dies from her illness. Their son dies soon after from it too. The doctors are baffled by it and contact the CDC. Damon is put into isolation to see if he is infected.

The CDC is where Laurence Fishburne works and he calls in a field agent, who is played by Kate Winslet to control the situation. She goes to Minnesota to try and stop it from spreading. When she becomes sick herself, this horrible situation has become even bleaker.

There is also a freelancer blogger who has been following the story of the man on the Tokyo train who died in the same way as Paltrow, he is played by Jude Law. He is a conspiracy theorist and believes the government is behind the illness and behind why it hasn’t been controlled.

The World Health Organization gets involved too, sending Marion Cotillard, to where it originated. She is there to learn how it spread and what they can do to control it. The CDC also contracts two doctors in a lab, played by Jennifer Ehle and Demetri Martin, to see what they can learn about this new virus. They also send it off to a private doctor, played by Elliott Gould, who analyzes the virus in his lab as well.

It turns out that Damon is immune to this virus and his daughter, played by Anna Jacoby-Heron goes to the hospital to visit him. He takes her home when he is finally released, but he quarantines her inside their house. Her boyfriend comes over a few times to see her, but is sent away by Damon.

Cotillard is kidnapped by Chin Han to ensure that the people from his village get the vaccine. At the time this happened, there isn’t even one made yet, but they believe there is.

A state of emergency is put into effect, thanks to Bryan Cranston who is a general. He is out to ensure that it doesn’t continue to spread.

Will they be able to stop a virus that spreads this fast and kills its victim before it is too late? Can a vaccine be created? Are those in charge doing what Law stated? He claims to have contracted it and found a homeopathic cure, is it real? Or are the pharmaceutical companies running all of this?

Upon my second watch of this film, I still find this to be quite scary in the fact of how this could happen. They bring up the cases in the history of the world were things like this have happened and it is frightening, like the Spanish flu. This also has realism in it that we see how the world breaks down when our lives change. People begin to loot and not act like humans when the world falls apart. This is something we see over things smaller than this. I really like the idea of how this film follows so many different people and grows. We get to see it from the civilian level, those who are immune and those who are not, all the way up to high ranking government officials. I love at the ending how it shows the start of the virus and where it started all the way back on Day 1.

The acting in this film is amazing. There are so many great actors that it would be tough to list and commend all of them. To set the tone though, Paltrow is the first character we get and she dies soon after. Now she is sprinkled in when Cotillard is trying to see where the virus started and how it spread, so Paltrow does have more scenes even after she has passed. The film does well at moving between everyone to ensure that their stories are told.

That brings me to what helps this film the most, which is its editing. It has to jump between a lot of characters and stories, which I referenced above. To go from there though, it also has to progress the story along by telling us how many days we are into the initial outbreak. It actually starts at Day 2, all the way up until the end, which comes back to show us the start. I really liked how they did that. The score to the film is great as well. At times it is subtle, which allows the acting to take over. Other times it is prominent to help build the feeling of the scene. I was impressed by this. This film didn’t require much in the way of effects. What they did was mostly make-up to make those that look sick do so in a realistic way.

The acting in this one is good and the story is as well. It is a little bit slow, so don’t expect it to be action packed, but the real fear in this one is its realism. It does make you think about what you do without thinking like touching yourself without washing your hands and how things get transferred. The film was solid in the editing as well as score and effects.  I would recommend giving this one a viewing.