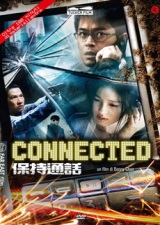 This film begins with a woman being waked up by her phone ringing; she is played by Barbie Hsu. We learn that she is an engineer of some sort and she was sent plans by a co-worker to try to figure out a problem they could not. She then takes her daughter to school, who is played by Moon Moon Chan. On her drive home, she is in a car accident that is intentional.

We then meet Louis Koo. He is a debt collector and goes to a house with his co-workers, scaring a family to pay the debt of the husband. He is divorced and he has a son who is going to Australia, the son played by Tam Chun Ho. Koo’s sister is the one taking him to the airport soon, she is played by Flora Chan. We then learn that he makes promises that he does not keep. He promises this time he will see his son off. Koo speaks to a man outside of his car and we learn that there is a gun inside of it. Koo leaves without the man getting his weapon out.

Hsu is thrown on the floor of her house and she is asked by the man in charge, played by Ye Liu, where it is. She states that she doesn’t know what he is looking for. Hsu’s maid is then stabbed to death as the men in the house are ransacking it.

We then see a detective, played by Nick Cheung. He states what he thinks happened at this burned car and believes that drugs, cocaine to be specific was involved. We then meet a man that he was the superior to at one time, but after he got in trouble, he no longer is. This other detective is played by Siu-Fai Cheung. Sui-Fai is rude and sends Nick off on an unimportant task.

Hsu is taken to a shack out in the middle of nowhere. There is a phone inside of it, but it is smashed by one of Liu’s henchmen. Hsu wires it back up and tries to make phone calls with it. She cannot dial, but by rubbing two wires together, it simulates the same thing. She ends up getting Koo on the phone. He is ready to hang up on her, believing that it is a prank. Koo does see Nick on his way to the station and cuts him off. He turns the phone over to him and Hsu tries to plead her case. She has to stop though when Nick gets a call on his radio and Liu enters the room with some of his men. She doesn’t answer when he comes back on the phone. Nick doesn’t believe that this is anything more than a prank.

Koo believes her though. He hears Liu ask where Hsu’s brother is or whatever item he is hiding is at. She states she doesn’t know where he is or whatever they are looking for. They then state that they are going to go after Moon. When they leave, Hsu asks Koo to get her daughter before they do.

He does make it to the school in time, but the headmaster, played by Ying Kwan Lok, stops him from breaking the rules. The kids are released and Moon is kidnapped. Lok tries to hold Koo until the police arrive, but he bites his hand and gets away.

Koo cannot hang up on Hsu or all is lost. He has to get a car charger to prevent his phone from dying. He also engages in a high-speed chase until he wrecks his car and needs another one. His phone also gets onto another car and he has to chase it down to get it back. He finds the gun and does use it in his attempt at a charger. Something about this case does not sit well with Nick as he starts to look into it as well.

Hsu’s brother ends up turning up at a hospital. The men that have her kidnapped are actually INTERPOL agents. Hsu then asks Koo to save her brother, who is played by Carlos Chan. Will he get there in time or will these agents? Are they really agents? Who is good and bad here? Can Koo see his son before he leaves while still helping out? What are they looking for? How deep does this plot go?

I want to lead off saying that I searched this film out as it is the China/Hong Kong version of Cellular, which I really liked. This film is actually a very good remake of that one. I thought the acting was good in this as well as the story and concept, even though it is a remake. What makes this one interesting though is that being from Asia, many of the characters use martial arts. I also found it interesting there is a point where a woman who is played by Ankie Beilke, is posing as Hsu. Hsu’s character is supposed to be from China and naturally speaks Mandarin. Beilke speaks Cantonese, which makes Nick know something is up. I didn’t notice a difference, but I don’t speak either. Still thought it was a cool piece to the puzzle. I also liked the twist, even though I believe it is similar to the one in the American version. I also liked that it doesn’t have the Hollywood treatment, where Koo continuously fails during his mission to save Hsu.

One of my biggest issues was that I had to watch this film on my computer, because I am unable to find a copy in the United States thus far that is subtitled or dubbed to watch. I also had issues, because they would text messages that are in characters I cannot read, so I didn’t grasp what the messages said. Now this doesn’t ruin the film, but I am story person and love to get all of it. I also feel the film didn’t introduce some of the characters, so I had a hard time figuring out whom some of them were as well, like they have names in the credits, but not sure who they actually were in the film.

I wanted to add that this is part of my horror film research due to this is secret agents, kidnapping individuals. On top of that, they are willing to kill everyone involved in order to cover up what is happening and that is scary. To add to this though, I am also adding it, because if Koo hangs up his cellphone earlier in the film, then everyone may have died and the agents get away with it. That is scary especially with the situation with the phone used.

Now with that said, I feel this is a very well done film that is a remake of the American version. Many times you will see this the other way around, but they did a fine job. I think the acting is good as well as the story and the concept. Film does have some twists with the culture that we do not get in the American version, which is good. Now having a copy that was completely translated would have probably helped me enjoy the film more as well as better introduction to some of the minor characters as well. I will warn you that you will need to find this film online if you are going to watch it in America at this time. I did find a clean copy that is mostly in Cantonese and Mandarin, with a little English splashed in as well. I had to watch it with subtitles on, which was difficult to find a copy with subtitles in this language. If you liked Cellular and want to see the Hong Kong version, then I would view this film.