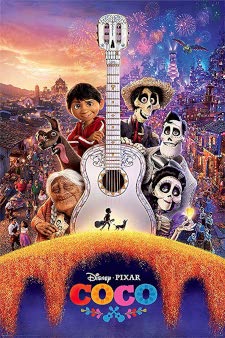 This is a movie that I remember when it came out and people talking highly of it. Jaime told me that she cried during it. She isn’t the only one to say this either. I even know some people who aren’t emotional who felt that way. It was one that I knew I would see eventually. On our honeymoon, we paid for Disney+ and decided to take advantage. It is also on our Internet Movie Database poster we are working through. The synopsis is aspiring musician Miguel (Anthony Gonzalez), confronted with his family’s ancestral ban on music, enters the Land of the Dead to find his great-great-grandfather, a legendary singer.

For this movie, we learn about our main family and it is narrated by Miguel. He tells of his grandmother Coco (Ana Ofelia Murguía). Her mother, Mamá Imelda (Alanna Ubach) was married to a man who left her to pursue his dream in music. Since that point, music has been banned with the family. Mamá Imelda started a successful shoe business instead. This has filtered down and everyone in the family agrees with this belief. That is until Miguel. His abuelita (Renee Victor) is strict with this to the boy, preventing him from going to the plaza where the mariachi bands play.

Miguel sees his chance though. There is a talent show coming up, but his guitar is discovered before he can go to it. His hero is Ernesto de la Cruz (Benjamin Bratt). He is from this area and was a famous singer who turned into an actor. He died in an accident when a bell fell on him. Miguel has a secret room with video tapes and posters of him. It is there he escapes to play music. As I was saying though, before he can get to the talent show and live his dream, he is discovered.

Miguel then decides to steal Ernesto’s guitar from his crypt. Ernesto’s mantra was to seize the moment and that is what the boy is trying to do. In the process, by stealing it he is sent to the underworld. Dia de los Muertos is coming up, so all families are celebrating their ancestors. Miguel is there and runs into Héctor (Gael García Bernal) who cannot get over the bridge. His disguise is discovered and no one is honoring him on the other side anymore. He strikes a deal to help Miguel in exchange to honor him when he goes back. Miguel runs into his ancestors, who try to send him back, but he must give up his dream to play music for that to happen. He believes from the picture that he has of Mamá Imelda and Mamá Coco, that the ripped off head could be Ernesto. He is trying to seek him out before it is too late and Miguel is permanently a part of this world.

That is where I’ll leave my recap for this movie. In my opinion statements, I relayed that there have been quite a few people that talked highly of this. Heck, it is one of the newer movies on the IMDb poster Jaime and I are working there so there is that. My first thoughts are that we have a great story here. We are getting a good message, incorporating lore in here that got me interested. The heart doesn’t hurt either.

Where I’ll start is the message of this movie. My babysitters growing up are of Mexican descent, so I knew they were quite family based. This movie references that. We see that if people don’t honor their relatives, they die a final death in the underworld and fade away. Héctor is experiencing this and is looking for Miguel’s help to prevent this. We also get to see that if Miguel doesn’t get the blessing of his family, he will be trapped here which I thought adds an element. Miguel has more to learn about his family’s past that they chose to not reveal. I thought I predicted this, but I liked that there was more to it than I realized.

It was interesting to watch this Jaime and I watched this while on our honeymoon in Mexico. We recently went to visit one of the Seven Wonders of the World in Chechen Itza and our tour guide brought up cenotes along with how they thought it was connected to the underworld. Seeing how this lore along with different things is incorporated into the movie, it gives an added touch to it for me. I’m a sucker for mythology so having that with the movie makes it that much better. There are also things like why they need to honor their family and the idea of spirit animals. This feels like they are taking what we get with engravings at important sites to deepen the experience.

The last bit that I wanted to go into here would be the heart here. I’ve already said that I’ve had people see this before me that stated they cried. There are even people I know that aren’t emotional seeing this movie and tearing up. Jaime wanted me to make sure that I stated here that this movie made me cry. It pulled at my heartstrings and my family used to be quite close like they are here.

Now before moving from the story, I wanted to say why I’m doing this review. Jaime brought up to me if I was going to review this or not. Her question was if I consider things like the animated The Addams Family movie or The Nightmare Before Christmas, why wouldn’t I consider this to be horror? We have ghosts, hauntings and skeletons. We also have Miguel fading away into the underworld if he doesn’t get back to the normal world with his family blessing. This is a family horror movie and a decent gateway for the same reasons as some of the ones that I’ve brought up.

So, from there I’ll go to the acting, which in this case would be the voice acting. Gonzalez has a good singing and feels like this boy we get in the movie. Bernal is an actor that I’ve seen in quite a few things and fit for what they needed there. I like the comedy that we get with his character and I’ll be honest, things that happen there make me tear up with him being potentially forgotten. Bratt fits for Ernesto as he does well in bringing a bit of arrogance that is needed for someone has famous as this character. From there I’d say that Victor, Ubach, and the rest of the family fit. I did like to see that Natalia Cordova-Buckley as Frida Kahlo, a famous character from history, as well as Edward James Olmos who I’ve known in many roles growing up.

Then finally the last bits would be the animation and the soundtrack. For the former, I thought it looked amazing. Knowing that it was Pixar, I come to expect that. The colors are vibrant and it feels like Mexico to me. Seeing it while being in Mexico reinforces that for me. I also like when they’re in the underworld and sugar skulls that are incorporated from Dia de los Muertos. The care there and the different ones used just add once again, another layer for me. The soundtrack captures the spirit. It isn’t songs that I’m normally into, but they work for what they movie needed for sure. I’d even say that it feels like the culture.

With that said, this movie lives up to the hype that others have shared with me. I thought the voice acting fits the characters and they feel exactly who they’re supposed to me. The animation is amazing from Pixar and the different colors used just add another element to it as well. I like the care that was put into the writing to explain why they need to honor their ancestors along with the mythology there. I’d also say that even though it isn’t my type of music, it adds to the movie. Even the villain works for me and makes me that much more invested. This won’t be considered a horror film to most, but for my criteria, it fits. This is a movie I’d recommend if you like Pixar, Disney and would go as far to call this a gateway horror film.