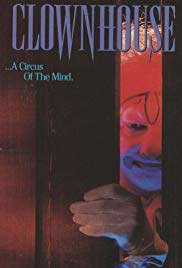 Now this was a film that I was a bit leery to check out. I never actually heard of it growing up and didn’t realize what happened during the production until writer/director Victor Salva’s film Jeepers Creepers III came out. I’m going to say this here, I am able to separate the art from the horrible person that made it. I finally got around to seeing this movie as part of a horror movie challenge I’m participating in. The synopsis is just before Halloween, three young brothers alone in a big house are menaced by three escaped mental patients who have murdered some traveling circus clowns and taken their identities.

This starts with a boy, Casey (Nathan Forrest Winters), looking of his window and then heading into the hallway. He sees something that terrifies him and he pisses his pants. We then see that it is a dream and he actually did pee himself. He takes off the pajama pants and leaves them on the floor.

Casey lives with his parents and his two brothers. There is the nerd, middle brother Geoffrey (Brian McHugh) and his tough, oldest brother Randy (Sam Rockwell). We soon learn that Casey is kind of scared of everything. His brothers want to go to a local carnival that night and their mother (Viletta Skillman) doesn’t think it’s a good idea. Casey changes her mind though and states he will go too. Their mother also complains about a hanging dummy in the front yard, even though Halloween is right around the corner. On their way to school, they pass a mental hospital where police cars head up to it.

At the carnival, the three brothers go to the big tent where they have some trapeze artists. A group of clowns, Cheezo (Timothy Enos), Bippo (Frank Diamanti) and Dippo (Karl-Heinz Teuber) appear to do their routine. They need members from the audience and Cheezo had his eye set on Casey. When he asked to join them, he flees as he is terrified of clowns. Geoffrey goes after him.

In their tent after the show, the three clowns are getting cleaned up. They hear someone messing around outside and they go to check it out. They’re then attacked by three mental patients who escaped earlier that day. These psychos then don the outfits and make-up.

Back at their house, the three brothers decide to make popcorn, but they’re out of kernels. Casey goes with Randy to the store before it closes. They don’t realize that two of the clowns follow them. They take care of anyone that they come across and trap these boys inside of their house. The problem is they don’t realize it until it is too late.

I want to lead off stating that this film has an interesting premise. I’m not actually afraid of clowns, but I do find them to be quite creepy when they’re made into a scary villain like this. That is something this film has going for it, especially since the madmen are assuming the identities of these three clowns. Not that it really goes anywhere, but it does help them to get off the premises of the carnival. The film also introduces this quote that are fears stick with us and that we can’t hide from them. I get what they’re trying to do with that, but this will lead me into what my big issue is here.

The issue I really have here is that I’m not entirely sure where this film is supposed to be going. It does establish the different personalities of these three boys. The problem though is that they’re so back and forth with getting along. I’m assuming that is in part to them getting spooked so their fight or flight response is making them standoffish against their siblings. The other problem is that when you focus on boys this age group, you really either need to ramp up the tension by going mean-spirited or you have to go with a bit more comedy to make it enjoyable. This one doesn’t do either unfortunately and I just found myself bored which isn’t a good sign.

Since I already started to cover the pacing, if you couldn’t tell I didn’t find it to be good. I think that we have a good set up here. We get an initial uneasy scene, learn the three main characters and somewhat get the set up that there is a breakout at the mental hospital. The problem then becomes we get a long stretch with the brothers bickering before we get to even see the psychos. That legit happens at about the halfway point. We get another long stretch of stalking. It does build a bit of tension when the boys finally realize that the clowns are there, but by then it was too late and they lost me. The most vicious thing that happened is legit right at the end.

That will take me to the acting. I’m not going to judge Winters due to what happened to him during the filming. I don’t necessarily think he was talented or anything like that, but what happened is horrific in its own right. McHugh is odd to me. He comes off as a nerd. He does stand up to Randy which was an interesting move, but it really doesn’t take us anywhere. Rockwell is extremely talented, but being his first movie I do feel that we are seeing him before be perfected his craft. The psychos are quite creepy as clowns, so I will give some credit there but the performances are pretty mediocre overall.

Moving next to the effects of this film, which to be honest there really weren’t any that I can think of. The kills are all done off screen and we get to the see the aftermath of one of them. I guess the look of the clowns was good, but that isn’t much to write home about. The film is shot fine aside from that.

Now with that said, I’m glad that I finally got seeing this film out of my system. I think there is a good concept here, but the execution just wasn’t there for me. The film is just too boring. I’m not sure what they were trying to focus on and there are just long stretches of things where nothing important is happening. The acting is mediocre at best, there really isn’t anything in the way of effects and the soundtrack does fit for what was needed. It doesn’t stand out, but there is a variation on a circus song that was pretty creepy. This is definitely below average