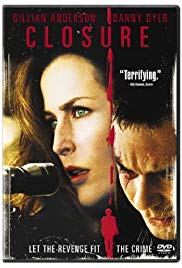 This was a film that I hadn’t really heard anything about. It was listed in a Horror Film Encyclopedia that I own, so I decided to check it out. The official synopsis is after surviving a gang rape and mugging, a middle aged businesswoman and her 23 year old boyfriend plot to murder their attackers, but find themselves conflicted about carrying out their plans.

We kick this off with Adam (Danny Dyer). He is on a scream that has some static and we learn that he installs home security systems. He is late for an appointment with Alice (Gillian Anderson). She lets him in and then goes back to work. She gets invited to a party to her boss’ new home. Adam sets up the system and actually watches as Alice undresses to shower. She comes out and invites him to the party with her.

They have to go a ways out into the middle of nowhere to get there. Alice comes on to him quite strongly during their drive up. At the party we see that he is a tad bit of his league. The job that she has she makes quite a bit more money than he does and she is important in her company.

On their way home, they get behind a truck that is going quite slow. They blow past it and mock those inside the vehicle. The couple is brought to a stop when they hit a deer. They get out to put the animal out of its misery and to move it out of the road. The truck catches up to them and they aren’t happy about earlier. The men that get out beat Adam and cut his eye. They then rape Alice.

The two of them wake up in the aftermath of what happened. This event brings them closer together, but it also breaks them in different ways. When Alice’s father dies, she returns to the home she grew up in. He actually lives close to where the traumatic event happened. She runs into one of the men, but he doesn’t recognize her. Her father was a soldier and she decides to take back her life and get revenge. Adam on the other side is broken and turns to drugs. She brings him to the country and what they do next defines their characters forever.

When I was making sure that I had the correct film, I saw that the encyclopedia on it compared it to a Last House on the Left. I can definitely see that comparison. It actually has a very similar premise to set everything up. The rape is much less graphic and I think a lot of it is that it takes place in the dark. The shadows are able to hide a lot of it. It doesn’t make it any better though.

The aspect of this film that really bothered me was seeing how these two cope with their different attacks. Alice doesn’t want the police to know and doesn’t think they can do anything about it. Like most rape revenge films, she decides that she is going to take care of the men that hurt her. I have a weird stance with these films. I love seeing the women are empowered, but it is sad what has to happen to them to become that way. Adam on the other hand is broken by his attack. He has trouble getting erect and actually orgasm during sexual encounters. After what happens, he does need to be rougher in order to gain gratification. He also turns to drugs to cope. There is an interesting aspect to the film at the end though.

Something that really amped up the emotions would be the interactions between these two. Alice gets on Adam for turning to drugs and for not helping her as she goes for revenge. He comes off as weak, but we see the farther they go; he is more like the men that wronged them. This is in part to what they did, but also with how she is pushing him.

This film has a low running time and I think that actually helps the pacing as well. It moves through its plot-points and never hits a lull to me. I find this film is actually be more believable than other films in this genre for what happens during the end of the second/beginning of the third act. I found it to be quite interesting. The ending is different and I enjoyed it as well.

Acting is something that is quite important for a film like this. Anderson is an actress that I’ve been pretty impressed by in everything that I’ve seen her in. It broke my heart seeing her go through this traumatic event and seeing the aftermath of it. I had a hard time not agreeing with what she wants to do. Dyer though as her counterpart was solid as well. He goes through his own trauma and we see the way he decides to cope with it. I almost feel like that he is pushed into what we see by Alice as well. Adam Rayner is also good as Jago. He is a member of the group that attacks and the film actually humanizes him. When we see the truth of why he did what he did, I felt partially bad. It doesn’t make what they do right, but his motives are hard to fault. The rest of the cast I thought really round out the film for what was needed.

Next brings me to the effects. There really aren’t a whole lot and it didn’t need them. Now there was a deer that was hit by the vehicle and when it stands up, it was done with CGI. I really want to know if there was deeper meaning by showing this. This was such a minor thing that it didn’t really bother me. The rest of the effects were done practically and looked fine.

Now with that said, this film I thought was powerful in its own way. It is a different take on the rape revenge film. Seeing these two different people deal with what happened to them was good. I thought the acting made it seem quite real and heart breaking. The rest of the cast round out the film well for what was needed. I thought the film was paced fine and has an interesting and different ending. There’s not a lot in the way of effects, but I had no issues with the ones we see. The score of the film really didn’t stand out to me, but it also didn’t hurt. Overall I’d say this is a good film, but not for everyone. If you can handle the subject matter, it is worth it.