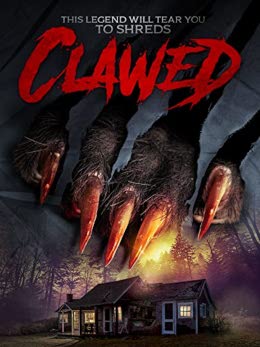 This is a movie that I only know about due to my sister. She saw it due to it featuring scream queen, Tiffany Shepis. I didn’t know much about this other than that it looked to be available on YouTube. I decided to give this a watch and came in blind aside from knowing the title.

Synopsis: a geology field trip into the remote Bear Claw wilderness area turns into a nightmare for a group of college students as they find themselves prey to a viscous man-beast locals call The Shadow of Death.

We start this movie off with a podcast host having her 100th episode. She comes to a house where she is interviewing the lone survivor of an attack on Bear Claw Mountain. He claims that what attacked them wasn’t a bear. She points out that he signed an official document saying that it was. He reveals that he did that so they didn’t lock him up. He then goes about recounting the events of what happened.

There is a large cast of characters here. One group has Jim (Wade Sullivan) who has cancer. He was told that the treatments fail. He decides to go to Bear Claw Mountain where there is talks of sludge like water that has healing properties. His girlfriend follows him up as well. Jim finds this substance and it seems to heal him. There also seems to be side effects though as well.

There is also this group of geology students. They’re led by Dr. Jones (Anthony Connell). We see that he’s trying to get rich off this and using his students to do that. They discover this odd substance that is coming from the ground. They think it could be caused by recent earthquakes. There also seems to be toxic waste that is dumped here as well.

Then there are also other smaller groups. There is a photographer who is there to attack his model. We have another group that consists of Donna (Shepis) and Sandra (Felissa Rose) where the husband is married to the former and impregnated the latter. There is also a couple of campers up this way as well. This monster attacks all these groups. It doesn’t seem to be a bear like it said in the beginning. It is much more than that and it is vicious.

That is where I’m going to leave my recap. I wanted to introduce more of the characters, but this movie is all over the place. I’m glad that we have a large cast as this gives a lot of ‘cannon fodder’ to build up that body count. I’ll even shift over here to say that the practical effects we get off these deaths are good. I even have a soft spot for what the creature looks like. For the most part, we get quick glimpses before cutting away. There is even an interesting enough concept with it. This lacks in the execution department though.

Now I did throw a good amount of information at you there. Let me break it down a bit more for you and I’ll start with the story. I think our introduction is fine. We set up that there is a creature. It is thought to be a bear while those that have seen it, know it is something more. I like the idea of this thing on the mountain as well. The movie seems to be saying that it is a mutation due to the toxic waste dumped there. It almost seems like something that is naturally occurring as well. There are people that think things like hot springs have natural healing properties. To an extent, I agree. This sludge can remove ailments from people. We get introduced through a story with two women as well with what happens with Jim. I even like that this seems to cloud the mind after it works its magic. This works for me. We have a bit of eco-horror as well as humanity ruining nature with waste. If we focused more on this, I think we could have had a better outcome.

Instead, we get a bunch of characters that get killed off. You would think that this would make it more exciting, but for me it made it more manic. I’m having trouble piecing together who is who. I will say that the people cast are attractive. I was able to write some of the characters names down, but I don’t think I need go through that. I did recognize Rose and Shepis. They just have cameos. The acting here isn’t good. It is amateur and I’ll be honest, for the budget we are working with, it works. I’ve seen much worse. I almost feel this movie could be condensed down a bit and flesh things out to help it out. There is even a reveal at the end that they’re trying to use a stinger. It is clever, but by then it had already lost me so it didn’t make much of a difference unfortunately.

Then really the only other things I want to go into would deal with the filmmaking. I thought that how this was shot was fine. I think the best part of the cinematography was showcasing the practical effects but cutting away before it gave it away. An issue I did have though was with the CGI. It isn’t good. There were times that I noticed and it took me out of the movie. It was already having trouble keeping my attention if I’m going to be honest. Other than that, the soundtrack didn’t stand out to me. I did notice some issues with the sound mixing which doesn’t help this either.

In conclusion, there isn’t much more for me to say. We have an interesting premise here. I like the idea of this creature. What I think the problem for me is what they decide to focus on. Instead of delving more into the story, they went with a huge cast and trying to kill them all off. There are just too many plot-holes. The acting is amateur, but I’ve seen worse. The practical effects are good and I’ll credit the cinematography to cut away to help there. The CGI wasn’t good though. This just had problems keeping my attention unfortunately. I can’t recommend this unless you are into bad films.