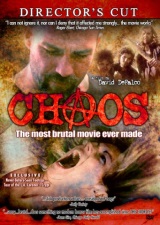 This film begins with a young woman returning home from college, she is played by Maya Barovich. She has been living in Los Angeles and goes to UCLA. She meets up with her best friend, who is played by Chantel Degroat. Barovich tells her how much fun she is having at school and asks if there is anything going on tonight. Degroat mentions a rave.

We meet another group of characters. There is a trashy girl who is trying to hitchhike. She is played by Kelly K.C. Quann. Two guys pull over to give her a ride, but they want a little more in return. This duo is surprised when Quann’s friends appear. There is one played by Stephen Wozniak. Their leader is Kevin Gage. He comes out with a baseball bat and destroys their car. We learn that Gage has a son and they go back to meet with him.

We then meet Degroat’s parents. She is a daughter of interracial parents of Scott Richards and Deborah Lacey. This is not an issue to me, but the film makes a big deal out of it on a couple of occasions. Barovich tells Degroat’s parents about the rave and Lacey tells her daughter that she is to be home by midnight. If she is going to be late, she needs to call and tell her. Lacey isn’t overly excited about her going while Richards wants her to have fun, knowing she is an adult. Throughout the film we see Lacey worrying about this.

The two young women travel to the rave. We learn that Barovich is a little of a bad girl while Degroat is a perfect angel. Barovich states that she wants some ecstasy for the rave to make it better. Degroat agrees that it would make it more fun.

We see Gage, Quann and Wozniak where they are held up. We learn that Gage used to be in the military, but was dishonorable discharged. He is fooling around with Quann, but she also likes to mess around with other women. We learn that Gage’s son is off trying to find girls for them to have fun. We also learn that this group is wanted in multiple states.

They arrive were the rave is going to happen, but they are early. Barovich sees a man that looks like he would know where to score some ecstasy. The man they speak with is Sage Stallone. He tells them that he has some, but he has sold out. He needs them to come with him back to his place and to get more. Barovich agrees and talks Degroat into coming with her.

There is a big surprise when they get there. Gage ties them up. We see that Gage is completely rude to Stallone. The girls are terrified and do what they can to get away. They are thrown into their van and taken out into the woods.

This is when the film gets disturbing. They are toyed with by the group. They do get away when Barovich knees Wozniak in the groin and Degroat pushes Quann down. The chase is on.

Degroat is caught soon after. Her shirt is ripped off, his right nipple is cut off and then she is stabbed to death. After she is dead, she is raped. Barovich survives until dark, but she is caught. She gets a knife and stabs Stallone in the groin. He is bleeding to death when Gage suffocates him. Barovich runs to a car. The person driving it stops, but doesn’t help as Gage grabs her and drags her back into the woods. She is then cut fatally.

The group goes back to their van and it won’t start. They go looking for a way back to Los Angeles.

Richards and Lacey call the police and meet two police officers. The senior one is racist. They take the information and will begin their search. They don’t wait for them to be found and go looking for their daughter and find the abandoned car with Degroat’s cell phone on the seat. They then stumble upon the body of Barovich.

The group comes to the house of Lacey and Richards. Richards notices the belt that Quann is wearing and knows that it belonged to his daughter. He informs the police again who he has there and goes about finding out where his daughter is. He is dealing with some dangerous individuals though. Who will survive this? Will Gage and his group make it out alive or will Barovich’s parents get their revenge?

I have to say that no matter what the director and producer of this film say, this is another remake of the Swedish film ‘The Virgin Spring’ as well as almost a complete remake of Wes Craven’s ‘The Last House on the Left’. This film does have some good acting. I really liked Gage as the crazy leader of the group. I also really liked Barovich and Degroat when they are being attacked. I felt they were very realistic and they had me feeling horrible as it was happening. I think the special effects were realistic and that was good for the film. That is where it stops.

This film as I said is a remake, but it takes the best part of what makes The Virgin Spring and Last House on the Left great and leaves it out. It is really great to see the parents, especially the father, getting their revenge on those that hurt their child. This one takes this out with having a nerdy father. The acting is horrible across the board, aside from what I stated above. Barovich and Degroat were bland before their attack. The one police officer is horribly racist and it doesn’t make sense why it was even in the film. The ending I thought was horrible. We have Gage killing a member of his own team and the racist cop killing Richards. It didn’t make sense and I thought that it really hurt the film. There is also a blatant goof where Barovich is supposed to be dead and you can see her breathing as well as moving her hand. There is more, but I won’t point everything out.

If you want to see a parents getting revenge on the bad guys, avoid this one, because we don’t get it. This film takes the disturbing portion of The Virgin Spring and The Last House on the Left, but doesn’t give us the satisfaction of seeing good people pushed to the edge and doing what they never thought they could. There is horrible acting with a couple bright spots. I would recommend seeing the other films in this genre, as this one is not worth the time. I believe director David DeFalco is crazy and a little delusion. He did create a violently brutal film that did some good things right. The problem is there is more wrong with this film than right.