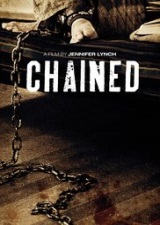 This film starts with a boy cleaning up something with a bucket. He hears an alarm going off and he starts to count. The boy is played by Evan Bird. He has a chain around one of his ankles. A man drags a woman into the room; he is played by Vincent D’Onofrio. The film then shows us outside and informs us that the events we are about to see happened 8 weeks prior.

We see Bird with his mother, played by Julia Ormond, as well as his father, played by Jake Weber. Weber drops them off at the movies and Ormond allows Bird to pick what he wants to see, which he chooses a horror film. Before Weber left, he told Ormond to take a cab home, since he feels it is safer.

Ormond uses her cellphone to call a cab, but stops when Bird points one out. They get into it, but Ormond becomes nervous when he misses their exit. The cab goes to a house out in the middle of nowhere and we see that D’Onofrio is driving. He takes Ormond into the house and soon after we hear screaming. He then comes back out to get Bird.

D’Onofrio then gives him the house rules. He will do what he is told. He will clean the house; he will not eat or drink without permission. The only food he will have will be whatever D’Onofrio does not eat. He will keep a scrapbook of missing women that D’Onofrio kills.

Bird is bothered when D’Onofrio brings women home. He rapes and kills them, then buries them in the basement. Bird one day tries to escape, but waiting outside is D’Onofrio. That is when the chain goes around Bird’s ankle.

Bird then grows up to be Eamon Farren. He is a tall, slender young man that looks malnourished. D’Onofrio reveals to Farren that his father has remarried and that that he does not care to find his son. D’Onofrio has a change of heart with him. He wants him to study the puzzle of the human being. The main goal is to learn from him to kill. Farren is interested in learning how the human body works, but not so much in killing. This angers D’Onofrio.

D’Onofrio continues to bring women home and involves Farren more. Farren never touches or hurts them, but he watches as D’Onofrio does. One night though, D’Onofrio brings home a young woman, played by Conor Leslie. He has her go into a room with Farren and informs him that he does not kill her, then D’Onofrio will do it himself.

Leslie believes that this is all about sex and is willing to let Farren do whatever he wants with her to be let go. Farren informs her that is not the case, which the intent is to kill her. She will still allow him to touch her. D’Onofrio busts into the room and Farren stabs her in the abdomen. We soon after see him drag her out of the room and into the room with crawlspace access. He comes up some time later, without his shirt on and covered in dirt. He tells D’Onofrio that he is interested in the hunt.

Has Farren gotten a taste for killing and wants to follow in what D’Onofrio does or is he playing him? Can Farren get away before it is too late? Can he find his father and be reunited?

I have to say that the only reason I rented this was I worked at a video rental store and saw the trailer on a disc that we showed in the store. I came in not expecting much and was very surprised. I really liked this film. I felt that the acting from D’Onofrio, Farren and Bird was really good. The concept is solid as well as the story. This film shows the Stockholm Syndrome where Bird/Farren have lived with D’Onofrio for so long, they develop a kinship since there is no other stimuli. I do like that Farren keeps to his morals and that the sight of these women in pain bothers him, that he doesn’t want to kill. I was also a really big fan of the twist that happens at the end. I didn’t see it coming. I also feel bad for D’Onofrio as we see what happened to him as a young man and why he turned out the way that he did.

I will say that the only drawback to this film was that there is a lull when D’Onofrio is trying to convert Farren that it got a little bit boring for me. I personally liked the ending, but it does feel rushed. Apparently there was more that they wanted to do with it, but they had to cut it short with what was used. I also read that there was another concept of the house that Bird/Farren was kept in was supposed to be in a sub-division with happy families all around them. This would have been much more difficult to pull off, but that would have made this film even more twisted than where the house is in the film.

Now with that said, I would recommend seeing this film. This is a low-budget gem. The acting from the three stars is great. The concept and story are not only terrifying, but realistic and played out very well. It makes you wonder about serial killers, if it is nature versus nurture and that definitely is explored in this film. Now it could have been better and it does have a lull in the middle, but that wasn’t enough to ruin the film for me. This is definitely worth at least a viewing.