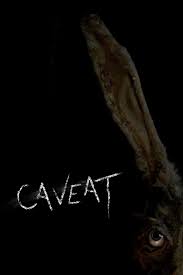 This was a movie that I heard about thanks to some podcasters that I respect. They seemed to enjoyed this, so I was intrigued to check it out. It makes it even easier that it available on Shudder. Now I did read the synopsis before watching it, just to see if it would work as a Featured Review for my Odyssey through the Ones on Journey with a Cinephile: A Horror Movie Podcast. That synopsis is a lone drifter suffering from partial memory loss accepts a job to look after a psychologically troubled woman in an abandoned house on an isolated island.

For this movie, we start getting to meet Olga (Lelia Sykes). She walks into a room with a toy rabbit. She keeps presenting it to different parts of the room and it comes to life, playing its drum. When I mean come to life, it is a toy that I’m assuming should be wound or have batteries. It leads her down the stairs and to a small section of wall that is different. This looks to have been an opening that is fixed with drywall. She presents the rabbit and it plays its drum again. She then cuts a hole in the wall and looks in.

There is a good transition here to Moe Barret (Ben Caplan). He is speaking with Isaac (Jonathan French). He asks how long he will be staying and offers a job. It seems simple. He must watch his troubled niece. He reveals she has psychological issues, but he will pay him $200 a day. Isaac is leery about taking on this job. He does agree though.

Isaac becomes uneasy when he learns that the house is on an island. He did know that her father killed himself and her mother disappeared. Barret convinces him that it will okay so they take the boat to the house. Things get even darker when they arrive. The house is rundown. I’m surprised it has electricity. The worst part though is that Olga has issues with sleeping. Apparently, her grandmother would sleepwalk, so she created a harness that is connected to a chain in the basement. For Olga to not worry about Isaac entering her room, he has to put this on. He refuses, but Barret can be convincing.

Barret leaves and Isaac tries to find ways to pass the time. He tests to see how far he can go while wearing this harness and it isn’t much. Weird things happen around him, which makes this already uneasy feeling he has worse. The chain is pulled on, but there is no one around. Lights turn off by themselves and there is haunting painting in the room he is staying. To make it even worse, when Olga she becomes too excited goes into a catatonic state and covers her eyes.

Things aren’t as they seem though. This might not actually be Isaac’s first time on the island. As time goes on and he starts to recover his memories, he makes some grisly discoveries within the house. Not everyone is as they seem either.

That is where I want to leave my recap. What I find interesting here is that we don’t have the most complex story, but it is quite engaging. From the beginning, we are given limited information and things are revealed as we go. It seems that from the start, Barret knows who Isaac is, but since the latter has memory issues, he isn’t sure how. He even makes a statement that it doesn’t seem like someone he would be friends with. The memory issue gets revealed to the cause as the movie goes on and I liked that. Since Isaac is unsure of what is fully going on, we aren’t sure either.

Before I get too much more into the characters themselves, I want to talk about the setting. Isaac is leery taking on this job, but it keeps getting worse as we go. The house is on an island, so it is isolated. It isn’t in good shape either. That adds a creepy element to it. There is another part where a family foxes live on the island and Barret tells Isaac how their cries sound like a teenage girl screaming. To describe it like that might be on point, but how he words it makes it unnerving. The power ends up going out. It is dark and dreary even with the power on. The basement is where things also take place and that adds to the atmosphere this movie has.

With that taken care of, I’ll go the acting. What I find interesting to start is our character of Barret. He enlists the aid of this guy he barely knows to look after his niece. Caplan does a solid job of being someone who is unreliable. Offering the position is only the beginning of this. The more that Isaac learns during his time on the island and as his memory comes back, the more we realize that Barret might be playing him as well as spinning half-truths.

French is also good as Isaac. He asks the right questions and we that every time he is faced with a decision, he makes the right choice. The problem is that he is pressured which causes him to change his mind. In the beginning though, the job sounds weird, but the money is good. The more he learns, the more he realizes that is a bad idea. His memory loss at first felt convenient, but as it goes on, it makes sense. He doesn’t know who he can trust. As I said, I like that we don’t know things until he does.

Then finally I want to go into the character of Olga. We know what Barret says about her. She is right there in the beginning, but we don’t get to know her until probably 25-30 minutes into this movie. She is sitting in her catatonic state, which is creepy. She seems to be a similar situation as Isaac of not knowing who to trust, her uncle or this man who is here to ‘look’ after her. I thought Sykes performance was good to along with her co-stars.

With that out of the way, I think next should be the effects, cinematography and the soundtrack. I am combining this as they all contribute to the atmosphere with is the best part of the movie. Since the setting is so good, I like how it is lit. The cinematography helps to bring this location to life. There are also some creepy things done with the framing that was effective for me. They don’t have a lot in the way of effects, but what we get is practical. There is another character that scary looking and made me uncomfortable. The soundtrack and design were good as well. The movie does lean a bit into the music getting louder as scares are getting close. It doesn’t hurt the movie, but I also think this is better than that. All these elements combine for an effective outcome.

So then in conclusion here, what this movie does best is the atmosphere. We are combining the setting with the soundtrack and how it is shot really help to build this. Coupling this with the story that might be light, but how it is presented works. The acting fits for exactly what a movie like this needs and I liked it. What we are getting here is simple, but effective and it made me uncomfortable which is what I’m looking for. I’d say that this is a good movie. One I can’t recommend to everyone, but if you like a simple, atmospheric movie, then I’d give this a go.