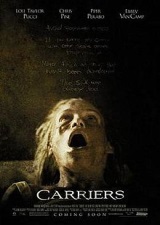 This film starts showing two kids playing on the beach. They look to be having a fun time. We then shift to the present. There is a group of four people in a car, driving down the road. The one driving is Chris Pine. He is drinking a beer and complaining about how warm it is and it tastes like urine. Sitting next to him is his girlfriend, Piper Perabo. In the back is Pine’s brother, Lou Taylor Pucci. With him is Emily VanCamp. On the hood of their car, they have Road Warrior spray painted.

The world has ended. There is an infection going around and these four have avoided it. Pine believes that he is immune due to working as a grave digger in the beginning of this for those that died early from the infection. They don’t take any chances, wearing masks over their nose and mouth. They also have a supply of surgical gloves and bleach.

They come upon a SUV that is parked across the road, blocking their path. There is a father outside of it, Christopher Meloni. He is asking for some gas so they can get to the next town. There is a CDC hospital set up that has a cure for the infection. His daughter is in the vehicle, Kiernan Shipka. VanCamp notices that she is infected as she has a mask and it has blood on it. Meloni produces a wrench and cracks Pine’s window. He does get away from him. They broke the oil pan in their car though. It breaks down and they have to trek back to Meloni and his SUV.

A deal is made. They give him gas and make quarantine in the back of the vehicle. They then clean it with bleach and drive him to the town he needs to go. When they arrive though, they search the school to find that it has been abandoned. They do find a doctor, Mark Moses, in a clean section of the gymnasium. There are some kids with him. He states the cure only lasted for a few days and the subjects still died. Meloni is upset and wants him to stop what he is doing.

Shipka stayed back at the SUV and Perabo with her. Shipka started to go into a fit and Perabo tried to help her, breaking the quarantine. She noticed she got blood on her and doesn’t tell the others. Meloni returns and takes his daughter with him. They walk away from the vehicle. The rest get back on the road.

They next come to a country club and start to have a little fun. Pine is messing with the swimming pool and pulls up the body of a man in a clean suit. He almost falls in, but is saved. They then hit golf balls at the building. One of them goes through a window into a room that we see has been sealed to be clean. There are a lot of supplies and weapons in there. It also turns out to be a group surviving there.

What will happen to this group? Can they avoid infection and find a new place to survive? Or will they fall victim to this infection or something else they encounter?

Films like this are really interesting to me, because of the realism. We don’t realize the things we do that spread viruses and sickness. If there ever is flu or something like this it could wipe out the human race pretty quickly. What makes these films even better is that they are pretty meticulous in their rules, but still people get sick. That helps to build the tension for this film. I also thought that the way the people they encounter act is very realistic as well. They are faced with very difficult decisions and it makes you question what you would do in that situation. The climax isn’t anything that is overly exciting, but it shows us that Pucci is really the star of this film; it is about him coming of age to make decisions. What is great though is he is very smart. He is supposed to go to Yale, but his brother is more street smart. Pucci needs to develop this to survive. I think that dynamic is fun to see played out.

The acting in this film was pretty solid across the board. Pucci as I’ve touched on above played this role very well. I was impressed. Pine was solid also. He comes off as a jerk and makes a majority of the decisions. Perabo is sweet and I felt bad for her. She is trying to do the right thing and it ends up backfiring. VanCamp was very interesting to me. We learn that she is a rich girl, but she ends up being very smart in how to survive this. I felt bad for her though as she was holding out hope about her parents. Meloni was solid and it was fun to see a very young Shipka as well.

This film didn’t need a lot in the way of effects, but the ones we got were practical. I thought they were well done and I saw no issues there. The editing of the film didn’t seem to be a problem. The film does have some issues with building tension, but I think that is more on the nature of the story. The film moves at a good pace, it is just one that isn’t going to have a climax that will blow you away. The score of the film really didn’t stand out either. I did like the touch that there are still some radio broadcasts. It helps the film with the bleak feel that it needed.

Now with that said, this was a film that I discovered in a horror film encyclopedia. I’d seen the cover and heard some good things. I finally gave it a chance and I enjoyed it. The film itself is a little above average, but the concept is scary to me. Something like this could really happen. The film is more about the choices the characters have to make to survive and for Pucci to be forced to be stronger. I thought the acting was good across the board. The film didn’t have a lot in the way of effects, but they were practical and well done. Editing didn’t really have any problems. There isn’t enough tension built though and the climax for the film isn’t great. The score didn’t stand out, but I liked the use of the radio broadcasts. I think this film is worth a viewing, especially if you want a realistic infection film.