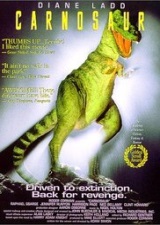 This film starts showing us the genetic code for chickens, lizards, vultures and other animals. We then see we are at a company called Eunice. They are genetically altering chickens. We see their board where there is Ned Bellamy. We then shift to the top scientist they have, played by Diane Ladd. Next it comes to Frank Novak. He doesn’t want the shipment of chickens to go out as he says there is something wrong with it.

We then get two guys checking out the chickens. One of them is played by Clint Howard. Something seems to be agitating them, but they are loaded and shipped off. One of the guys is attacked and it scratches his face. They make it out of the gate still.

While driving, the man hears something in the back. We see one of the chickens is attacked by something. He stops to see what is happening and he is attacked by a little dinosaur. It runs off into the night.

We then shift to a quarry. The man that is the night guard there is played by Raphael Sbarge. He is a drunk and he hears something outside. He goes to check and sees a bunch of people running off into the night. One of them stayed behind and it turns out to be Jennifer Runyon. He brings her inside and calls the sheriff on his radio.

The sheriff is played by Harrison Page. He is at crime scene where the truck driver was killed. With him is a doctor, played by Ed Williams. Page states he thinks it is a bobcat that did this. Williams states that there haven’t been bobcats in the area since he was born; being that he is much older. Sbarge tells him he caught a girl trying to sabotage the equipment and Page tells him that he will deal with it later. Sbarge ends up passing out drunk and Runyon leaves.

The following morning Page takes Sbarge to where the group is that is trying to shut the quarry down. They are worried about the environment. Page asks if Sbarge sees the woman that he had last night and Sbarge decides to lie. Page is bothered by this but tells him that if he changes his mind to tell him.

We then see that Novak entering the lab of Ladd. He is upset about someone close to him having passed away. He blames Ladd. Ladd tells him that they are still alive; he just has to go downstairs to see them. Novak does and ends up in a laser show. This is containing a tyrannosaurs rex. The lasers are keeping it in check, but it eats Novak.

The film then shifts to a group of three people in a jeep joy riding while drunk. They almost slide off a high cliff, but manage to stop. One of the guys gets out to urinate while the couple starts to fool around. They are then attacked by the dinosaur that is getting bigger.

Bellamy and the rest of the board are trying to figure out how to contain this. Woman start to become ill and we see that they are becoming impregnated with eggs. We see a scene where Page cracks eggs and black liquid come out of it. One falls and there is a baby lizard inside of it. This outbreak is spreading and a military unit is called in to contain it. Sbarge and Runyon hit it off. He finds the group has chained themselves to the equipment and he goes to get dinner from the local diner. He also is bringing something for Runyon. When he arrives back, they are being attacked by the dinosaur. The group is massacred except Runyon.

Can they kill these dinosaurs before everyone is dead? Can they get out of the quarantine? Did Ladd create these on purpose and why?

I have to say that I’ve heard of this film, but never had the chance to watch this until now. I surprisingly found it to be not that bad. I like the mad scientist aspects with Ladd, even though her reasons for what she is doing don’t make the most sense. I do like the idea that dinosaurs are being genetically created. It is fun to see them wrecking havoc in the town. It was slightly confusing at first why people are starting to get sick, but it does address that. I didn’t mind that aspect after the reveal. I really liked the ending though, I was hoping it would go the route it did and didn’t disappoint.

The acting leaves something to be desired. Ladd was okay as the mad scientist. I didn’t care for her reasoning, but that’s more an issue with the writing. Sbarge I couldn’t believe as the hero. He doesn’t command the role and I think that’s something that you need there. Runyon was bland. Page wasn’t bad though. Plus it was fun to see Howard, he is such an underrated supporting actor.

Next I need to cover the effects. I will admit that the dinosaurs look fake. For the most part though, I didn’t mind it. At the climax, the t-rex did bother me. The blood was all practical and I thought that looked great. The film has low running time, but I felt there were still some editing issues. There were just scenes that I felt don’t contribute much to the product and it made me question why they were there. It also didn’t build enough tension for me. The score to the film didn’t stand out to me, but it also doesn’t hurt the film either.

Now with that said, I surprisingly enjoyed this film, but it isn’t very good. The story is interesting in that dinosaurs have been created by genetics. This film does have a good concept. The acting wasn’t great, but there were some decent performances. The effects were good for the most part. The film does have editing issues and doesn’t build enough tension. If you like cheesy, campy horror films, I would recommend this one. This would be one to watch with friends while having drinks, but don’t expect much. It does have a solid ending though. It was quite average for me.