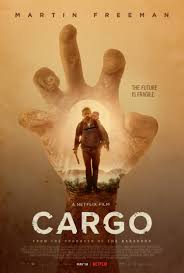 This was yet another film I heard a lot of podcasters watched this year and I decided I should check it out while compiling my list of the best films. I do also like zombie films when they are done right as well. The official synopsis is after an epidemic spreads all over Australia, a father searches for someone willing to protect his daughter.

We start this film on a boat. On it are Andy (Martin Freeman) and his wife, Kay (Susie Porter) also their daughter Rosie (Lily Anne and Marlee Jane McPherson-Dobbins) who is a baby. As they are floating down the river, they see a family on one of the banks. Andy waves to them and the father shows he has a gun. The world is not in a normal place anymore. There are zombies and everyone fears infection.

Andy wants to try for a nearby military base and stick to the water. Kay is worried as they are running out of supplies and they’re not very experienced. They come up on a crashed boat and Andy goes onboard. He finds some supplies, but hears something in a closed door. He reveals the things he found to Kay. She is worried about him going on to the boat like that. He assures her it was easy. She goes on it herself and is attacked by something.

This next bit is what really puts this film on a different level. They have a first aid kit for if you get bit by a zombie. It gives a Fitbit like watch that counts down that you have 48 hours until you turn. As you do you go through some side effects which can include seizures, your eyes being glazed over with pus and your blood coagulating. The kit also has a spike to kill yourself before it is too late.

Kay wants to give up so she doesn’t turn and kill Andy or Rosie. He won’t let that happen though and wants to get her into a hospital. Things take a turn though when he almost hits a man in the road and he crashes. Kay dies from injuries and she ends up biting him before he can get out.

It now becomes a race against time as Andy tries to find someone safe to leave his daughter with. He really gets to see the horrors of humanity when the world is falling apart around him.

Zombie films are something that is quite tough now to make a good one. The problem being that the genre was created by George A. Romero and he has made some of the best ones of all time. In order to really make a good one, you have to do some things different. I do think this one does do that. I like how the film establishes that there has been research done into the infection and they have kits that they give to people. It isn’t an exact science, but pretty close. I was a big fan of this aspect of the film.

Something else that really needs to be explored is humanity, which we also get. Andy really gets a look at different people when trying to find someone to keep his daughter before he finally turns. It is also kind of a look at racism. Part of this comes from Vic (Anthony Hayes), a man that Andy runs into during his travels. The things that Vic does to people are deplorable. We do get a look at the Aboriginal people as well and what their beliefs are on what is happening.

To touch on the creatures in the film, they are slow moving zombies. They do some quirky things as well which I didn’t mind at all. The effects on them looked good as well, which I definitely wanted to give credit for.

Unfortunately though, I do feel that this film does have a bit of a pacing issue. The film runs over 100 minutes and I never really found myself bored per say, but it does kind of drag for a bit. I like the things that we move through in the film, but I think I just wanted a bit more interaction with the zombies. I would have liked to know a little bit more about this infection as well. I thought the ending was really good and definitely has a good message for the film.

The acting was pretty solid as well. Freeman was absolutely brilliant. I am a big fan of him and he always seems to be great no matter what he is in. This film is no exception. Hayes I thought was an interesting character as he is the opposite of Andy. He is a bad man and really is taking advantage of what is going on around him. I thought Porter was fine as was Caren Pistorius. The latter is in the part of the film with Vic. She plays a sad character for sure. I also wanted to shout out Simone Landers who is Thoomi. She is an aborigine person and we get a look at her culture through her interactions with Andy. I thought the rest of the cast round out the film very well.

I have briefly talked about the effects for the creatures in this film. I thought the rest of them were solid as well. I do think there was CGI, but it definitely didn’t look bad. The effects as someone is turning were not only interesting, but I think they were also quite creepy. The film was also shot very well in my opinion.

Now with that said, this is an interesting take on the zombie film. The film does have an interesting story and concept. The idea that Andy has very little time and needs to find someone to watch over his daughter definitely heightens the suspense. I do think there were slightly some pacing issues though, because I really didn’t feel as anxious as I wanted to be about what was going to happen. I think that it involving a baby might have worked against it. The acting though was good as were the effects. The score of the film really didn’t stand out to me, but it also didn’t hurt the film. Overall I’d say this was an above average film with just some minor issues for me that kept it from being better.