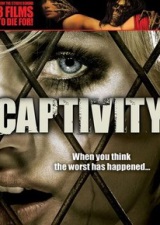 This film begins showing us a guy that is strapped down and is tortured by some kind of device. The man calls out in pain as he is killed.

We then shift to a beautiful woman putting on make-up to be photographed. She is a model and played by Elisha Cuthbert. We hear a lot of her interviews throughout the film and we learn that she is the hottest thing on the planet. We also see that someone is following her. They are recording her as she goes.

Cuthbert then goes to a bar where she is followed too by this mysterious person. We see that she orders a drink and before it gets to her in her private area, something is poured into it. She immediately becomes sick and tries to make it to the bathroom. She then discovers that she is being videoed. She passes out.

We then see that whoever did this to her is creating a scrapbook of some kind. We see that the first page is identifying the victim. When she wakes up, she is irate and starts to break things. A drawer opens and there is an outfit inside of it. She refuses to put the outfit on and the lights become much brighter and a loud sound is emitted. She hides under her bed to get away from it and then finds a tool she can use. She tries to escape from through the vents, but it doesn’t work. She is captured before she can get away.

The next time she wakes up, she is strapped down. The person fills up a blender full of body parts and blood. It is mixed up and then a funnel is shoved into her mouth. She tries to not drink it, but does until she passes out. We then see that the next stage of this is isolation.

When she wakes up again, she notices that there is a strip scratched out of the wall. It turns out that it is a window and there is someone on the other side. He writes a message to her by scratching more out and then she does the same back to him. They end up clearing a lot of it out and can see each other. Sound is not getting through the glass though. They find a vent that allows them to talk and he gives her matches when the power is turned off by the person watching them. This guy is also captive with her and he is played by Daniel Gillies. The two of them create a bond together in trying to find a way out.

It turns out the person who is watching and controlling everything is Pruitt Taylor Vince. Why is he doing this to them? Who is Gillies really? Can they get out or will they fall victim like the rest of the people who have been captured have been?

Now I will say that the first time I saw this film, I believe I was in college and I really liked it. I thought it was creative take on films like Saw. After my second viewing though, I am not as impressed by it and it didn’t hold up. I still like the idea of why Cuthbert is taken and held, but I don’t like the reason why it is being done. I don’t know if it something that could really work. I thought what is done to torture her and others was solid concepts, but not really sure it fit in the film per say. Wasn’t a fan how things played out during the ending and the twist got me the first time. I knew what to look for this time and the motives of the twist do not make sense. The story just doesn’t seem to flow as it should. I also don’t believe the house, its size and the set-up is real enough to believe.

The acting does leave a little to be desired. I didn’t mind Elisha Cuthbert. I thought she was great to look at on scene, but she doesn’t blow me away in this film with her acting. Gillies didn’t impress me much in this film. Vince, who I’ve seen in other things can play a creepy guy very well just didn’t get enough screen time for me to be impressed. There isn’t much else in the way of cast to really touch on here as well.

I will say that the effects of the film were good. I think they were done practical from what I could see. There is an acid on skin scene that looked good. The scene of forcing Cuthbert to drink a horrible liquid was gross and fun to see as well. The editing of the film does have some issues. For a film that isn’t very long, it does seem to drag. I get why we are focusing on the relationship of Cuthbert and Gillies, but I found myself bored with it. The score wasn’t bad. It stands out in a couple of scenes when it needed to build tension, which was good.

Now with that said, this film is average at best. The story is a take on the ‘torture porn/Saw-like films’, but doesn’t play out well enough. It doesn’t feel like those scenes really fit into the film to me. I liked the idea of why Cuthbert was taken, but not the reasoning of it. The acting is okay, nothing to write home about. I thought the effects of the film were good. There are some editing issues as a film at this length shouldn’t have felt as long as it did. The score of the film was good as well. I think this film does deserved to be viewed once, but there isn’t much rewatchability to me.