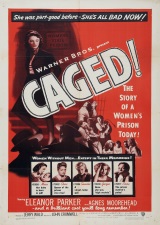 In this film we see a ‘paddy wagon’ bringing women to a prison. All but one seems to know the drill and get out. The one is played by Eleanor Parker. They go inside and get checked into the prison. From this we learn that Parker is a 19 year old woman, she is married, but her husband was killed and she is in prison for being an accessory to an armed robbery. Her husband robbed a gas station for 40 dollars and he was killed during it. We learn that if it would have been 5 dollars less, it wouldn’t be a felony.

Another fact we learn is that Parker is pregnant as well.

From here Parker goes to meet the woman who runs the prison, played by Agnes Moorehead. They chat and Moorehead assures her that she can get through this, comforts her and tells her that she can be up for parole in 10 months. She is given an easy job because of the pregnancy as well, also since Moorehead feels sorry for her.

We meet the matron of the block that Parker is going to be staying in, played by Hope Emerson. She immediately tells Parker to begin scrubbing the floors and that she is under her control now. This is just the beginning of Emerson and Moorehead going against each other. From here is also where Parker steadily changes from being incarcerated and the treatment she receives.

I have to this is really good film. This is the first prison film I’ve seen where they show what it is like in a female prison. Being from the 50s, I can expect it to be different today, but with that being said, this film is remarkable for the time. Emerson plays the villainous matron very well. She wants it to be the way it was where she can humiliate and beat down the prisoners like she used to. This causes her to goes against Moorehead the liberal thinking boss.

Something else about this film that I liked was how the prison makes people into criminals. Parker being young woman in love committed a crime. She doesn’t become a criminal until her time inside. Her transformation is amazing to view on film.

I am adding this to the horror film research due to the fact that this film shows what being incarcerated does to someone. Parker was a young woman who was in love and helped her husband. I don’t think she fully comprehended the results of her actions and is being punished. Not that this is a bad thing, but between the prisoners who dislike her to Emerson, who is hard on her, we see what prolonged stays in prison can do to someone. It also brings up the point of having criminals together, not only needing to survive, but that is the only way they know by being inside of the walls.

Now with that said, the only problem I had with the film was that for great part of it, they blame men for while they’re there. I understand as criminals, they don’t take responsibility for their actions. With that being said, I would recommend viewing this film.